These particular stairways, however, adorn the Bey of Algiers’ palace.
One curves gracefully, edged with an ornate gilt balustrade and supported by
burnished, spiralling columns; its arch frames dignified red velvet ottomans
and a small circular fountain which is suggestive of the bath chambers of the
harem. The other undulates like an air-borne flying-carpet, its ridges later to
be illuminated in contrasting colours, its wave-like ripples breaking onto a
feather bed of cushions. The juxtaposition of acute realist detail and
fantastical motif embodies the essential, and dynamic, duality of
Tuckett’s production of an opera which is itself founded on oppositions:
men versus women, East versus West, despotism versus freedom.

With the sombre black floor and back-flat showcasing the vivid complementary
colours of the scheme, Souglides’ design is an imaginative and impeccable
surround for Tuckett’s staged tableaux. And the latter are wonderfully
lit by Giuseppe di Iorio, who recreates in turn the Orient’s exotic
gleam, the stark brightness of Fellini, and the gaudy glitz of Vegas — as
when a silhouette of on Ottoman arch blazes with flashing, dancing strobes.
There are many lovely set pieces, not least when the three suitors listen to
Isabella’s declaration of love, each man secreted beneath the stairway,
assuming that her words are intended for him alone. 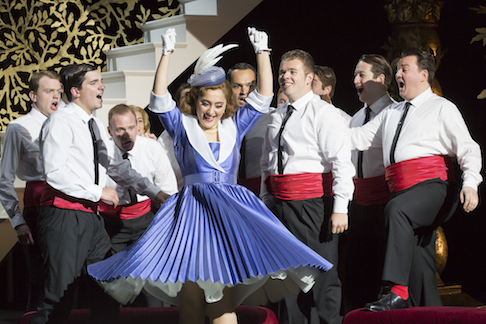 But, problems arise when it comes to stage movement: the staircases occupy
the whole stage space, and while it’s possible for harem dancers to
pirouette in the undulating scoop at the foot of the
‘stair-carpet’, and for supernumeraries and slaves to slide around
the decorative pillars, there’s not much room for any
‘meaningful’ choreography, other than a few skips and marches as
signalled by Rossini’s score. Even the well-orchestrated chaos of the
composer’s brilliant first act Finale, with its nonsense text —
‘ding dong’, ‘caw caw’ — clanging in the
characters’ heads, culminates with the protagonists slumped on ottomans,
covering their ears to shield them from the cacophony.

While this means that there is little distracting business during the big
arias, the ensembles do suffer. Once the principals are assembled in position,
on the inclines and in the dips, there is little chance of them moving. But,
perhaps this is indicative of the static nature of Rossini’s opera. After
all, though the eponymous ‘Italian Girl’, Isabella, arrives in town
and satisfies the self-absorbed, self-indulgent Sultan’s desire for a
change of romantic scene, nothing and no one really changes. Isabella
rules the roost: she liberates her enslaved lover, toys with the enraptured
Taddeo and with the toy-boy Turk, and instructs the harem in feminine wiles,
but the characters don’t develop. It’s a watered down Die
Entführung aus dem Serail: for in Mozart’s opera Konstanza,
imprisoned by Pasha Selim, truly suffers, while Belmonte seeks to rescue her
from an Oriental potentate who is aided by a genuinely rage-ridden Osmin, and
all undergo both quest and discovery.

Tuckett’s Act 2 slides into caricature and stereotype. Perhaps this is
inevitable in an opera that trades in racism and misogyny — though we
forgive the era its foibles. And, Souglides makes the most of the possibilities
offered by the glass sides of the Wormsley Pavilion, as we drift into night and
the set merges with the encroaching darkness without. The sliding back panels
which in Act 1 reveal the arrival of Isabella and her shipwrecked Italian
entourage — upon a rocky promontory beneath a burning red sunset —
now open on a cobalt sky and crescent moon. Pendant antique souk lamps throw
suggestive shadows as they rise and fall.

If there is less to engage us dramatically in Act 2, then this is probably
Rossini’s fault. But, the composer does provide two elaborate ceremonies
— or phony rituals — and they are inventively presented by Tuckett.
The first is the appointment of Taddeo as Kaimakan, in which he accepts the
title, uncomfortable gold-and-emerald khelat and outsize turban as a
better alternative than the executioner’s scythe. The second is the
according of the pseudo-rank of ‘Pappataci’ to Mustafà.

In both instances, Angelo Anelli’s libretto pays debt to
Molière’s Le bourgeois gentilhomme (1670) which enacts a
Turkish ceremony (Act 4 Scene 5) in which the foppish Monsieur Jourdain is
ennobled to Mamamouchi; and, both of Rossini’s set pieces are expertly
choreographed by Tuckett and visually resplendent. While Kaimakan is
still the title of a governor of a provincial district in Turkey, ‘The
Order of the Pappataci’ — though perhaps a nod to the secret clubs
in vogue in Venice in the early 19th century, where Rossini’s
opera was premiered — is entirely fictitious. ‘Pappataci’
literally means ‘eat your food and shut up’, a humiliating command
to the cuckold. Tuckett wittily connects ‘Mama’ with
‘Papa’ and comes up with ‘Sugar Daddy’: an apt sideways
step given that Mustafà’s initiation feast is the opportunity for
Isabella to manoeuvre her escape with the Italian entourage. So, having sworn
to ‘see and not see … to hear and not hear,’ and ‘to let
people do and say what they like’, Mustafà stuffs himself with
calorific candied confections — served up by a bevy of chefs sporting
candyfloss-pink toques — while the Italian lovers embrace and flee.

The costumes too articulate the divide between East and West, real and
surreal. We have authentic odalisques’ robes in magenta, plum and
crimson; slaves and guards whose cummerbunds — red on white, green on
blue — splash an abundance of rich colours. Mustafà swaps a tunic of
Oxford blue and silver for a caftan of crimson and gold, and ends up draped in
a Barbie-pink dressing gown as ‘Sugar Daddy’, trading his
authoritative sarik turban for a towering black fez.

But, the Italians — echoing the patriotic sentiments expressed by the
heroine — are attired in the fashions of Sophie Loren’s 1950s,
supplemented by a few Breton tops and Guantanamo-orange life-jackets to
indicate their sea-born arrival in Algiers.

Everything revolves around Isabella, the guileful femme who triumphs over
male presumption, vanity and misogyny. Essentially this in an opera about three
men who are in love with a single woman: the latter achieves her ends through
her erotic appeal, and with economy of effort and efficiency of outcome. And,
Ezgi Kutlu has the radiance and aura to lead from the front. Her mezzo-soprano
has plenty of ebullience and personality, and she has a wide vocal range,
incredibly strong at the bottom — Isabella is all warm mezzo seduction
rather than glinting soprano dazzle — which suggests a self-confidence
and sensuality born of experience. Kutlu was sincere of sentiment in her Act 1
opener, ‘Cruda sorte’, and a wily strategist elsewhere,
resourcefully exploiting her knowledge of men to trick and elude her would-be
master. She exhibited a bright, forward tone in the ensembles, balancing the
occasional touch of contralto smokiness. This sassy lass combined debonair
composure with comic flair.

Mary Bevan was a crystal-toned Elvira, and her voice rose beautifully aloft
during the ensembles. However, the role of the Bey’s abused, docile and
devoted wife is an unsympathetic one to modern audiences, and although Bevan
exchanged her funereal black frock for an olive-green get-up we were not
convinced she had really learned the lessons imparted by Isabella. Her
attendant, Zulma, was the vivacious and vibrant Katie Bray.

Quirijn de Lang’s Mustafà Bey of Algiers is an unstable blend of
fierce, tyrannical misogyny and foolish infatuation. He might complain that
Elvira’s pleas are bursting his ear drums but he is insensitive to the
fooleries being exercised around him. His despotism is of a caricatured nature:
as he ogles Isabella, the enslaver turned enslaved, so his court bend and bow
in imitation of their master’s infatuated obeisance. De Lang’s
baritone does have a beautiful baritonal sheen, but he struggled to meet the
role’s demands for agility and accuracy and there’s quite a lot of
comic woofery in place of genuine vocal acting.

Luciana Botehlo is an unassuming Lindoro, inclined to let his lady lead the
way. But, if Botehlo’s tenor is relatively light and characterless, then
so are Rossini’s lines for the ‘hero’, and the tenor
negotiated the twists and twirls, producing a smooth legato in his Act 1
cavatina, ‘Languir per una bella’ and subsequently relaxing into a
suave, debonair idiom.

Isabella’s third suitor, the hapless Taddeo, was neatly characterised
by Riccardo Novaro — Garsington were fortunate to be able to call upon
his services in the indisposition of Geoffrey Dolton. Torn between impalement
and life as a ‘gooseberry’, this Taddeo was vociferous yet
self-aware in his arguments with Isabella, exhibiting a natural comic flair and
creating sympathy for a character who can seem merely tedious.

Completing the male principals was Božidar Smiljanić’ as
Haly, who served the Bey with judicious deference and genuflection. The
baritone’s Act 2 aria, ‘Le femmine d’Italia’, was far
more assured and imposing than we might expect from a singer who is just
completing his postgraduate studies at the Royal Academy of Music.

Rossini’s chorus are barely involved in the action but, directed by
Susanna Stranders, they deployed themselves neatly, though occasionally the
stage-to-pit synchronisation was less than secure.

David Parry, conducting his 12th Rossini production for
Glyndebourne, drew tight discipline from the Garsington instrumentalists. The
tautness of the pianissimos was striking, and the overture (the
opera’s best music) was enlivened by surprising sforzandos. The
woodwind relished their concertante roles in the drama and flute, oboe, bassoon
and horn each enhanced the dramatic characterisation.

Rossini declared, ‘As for love, I consider it the prima donna
assoluta, a goddess who ravishes the brain with her cavatinas, making the
ear drunk and delighting the heart. Eating, loving, singing and digesting are
the four acts of a comic opera called life that bursts like the bubbles in a
bottle of champagne. Anyone who allows it to seep away without having enjoyed
it first is a complete and utter fool.’ La Dolce Vita indeed
… which this production set out to promote via Isabella’s
embodiment of the ‘Eternal Feminine’.

But, the opera also has a ‘revolutionary’ slant, which was
granted a mere glance in the final bars, when di Iorio’s lighting cast a
patriotic red-white-green pattern up the floating stairway. For in her last
aria, ‘Pensa alla patria’, Isabella urges the enslaved to lead a
renaissance of boldness and bravery — a risorgimenti trope
complemented by her attempt to fire Lindoro’s courage, ‘think of
our fatherland’, and contrasted by the alcoholic idiocies if those left
behind in the seraglio. In tying up the dramatic threads, Tuckett did not quite
overcome Rossini’s vulgar stereotypes of the Orient.

But, let’s return to the opera’s more central questions. While
Mustafà quietly asks his wife for forgiveness (‘Mi perdona’),
do the Orientals really learn from the Europeans? Does despotism give way to
more enlightened government? Though Isabella dishes out sweetly domestic
admonitions — ‘Colla sposa sia gentile’ (Be nice to your
wife) and ‘E si cara’ (She’s so dear) — and announces
that she intends to change such the ‘barbarous’ marital customs
— ‘Don’t act like a sheep,’ she instructs
Elvira, ‘for if you do the wolf will eat you up. In my country it’s
the wives who whip our husbands into shape’ — this production does
not propose that Rossini’s imaginary harem is on its way to Western
domesticity.

The final visual image — a passing cruise liner picks up the homesick
Italians — suggests that while the slaves are liberated from their
chains, and set forth for the ‘sweet life’, the Bey is just waiting
for another Italian girl to come sailing by.