The Calixto Bieito Carmen is old news, this edition having already taken place in Barcelona, Venice, Torino and Bilbao where I saw it in 2014. Already a Bieito Carmen has been around on advanced European operatic stages since 1999. This production was never headline news, finding instead this extraordinary stage director in a rather subdued state.
Bieito always creates a world that puts you on edge, here it was the cut-out bulls on the hilltops of Spain, gypsies in dilapidated cars, freaked out youth, blinding beaches and lurid tourism, and of course bull rings. Yes, in Bieito’s world there is fellatio, pissing, nudity, gang rape, child abuse and unbridled brutality. Yes, Mercedes was Lilas Pastia’s middle-aged wife, and yes, Don Jose was really annoyed by an insistent MicaÎla who sang her pretty song and then gave Carmen the “up-yours.”
First delineated by a semi-naked soldier hypnotically circling the stage for much of Act I Bieito’s Act IV bull ring finally was only a chalk-line circle laid down by Lilas Pastia in which the raw power of Carmen’s indifference was pitted against the impotent supplications of Jose. Murdered, Jose dragged Carmen out of the circle — like a dead bull.
Movement is violent and often sudden in this Bieito world. There were very limited moments of dialogue but many additions of crowd noise and shouts, and punctuations of imposed silence broken by frenetic crowd clamor. The quintet [in Bilbao] was splendidly staged catching the lightening speed of the music in fast, demonstrative movement, and the trio was deadpan, the cards read on the hood of a car with no sense of doom, Carmen indifferent to her fate.
There was no set. A simple cyclorama against which there was first a flag pole and a phone booth, then a car and a Christmas tree, then eight cars and a gigantic cut out bull and finally nothing except a beach with a marked out chalk ring.
All this might seem a recipe for a powerful tragedy, but this does not seem to be Bieito’s intention. The telling of Jose’s infatuation disappears into this cosmos of marginal life in Spain and becomes unimportant in itself, its emotions melted into the morass of a much bigger and equally violent, emotionally raw world.
Bieito’s Carmen world did not make it to San Francisco.
Production notes clarify that what we have now in San Francisco is “based on” Bieito’s 1999 production, staged “after Bieito” by Spanish director Joan Anton Rechi. For the record there was no fellatio, no pissing, no gang rape, no child abuse and no unfettered brutality. Replacing Bieito’s violent, elemental world are precious emblems of some Spanish village in North Africa, to wit 1980’s Mercedes Benz (six of ‘em) that are used as taxi’s thereabouts.
Replacing Bieito’s mythical characters, his larger than life personages that embody the tragic human scope of men and women (and a child as well) caught relishing this brilliant, brutal world were very fine singers in young artist programs or recent graduates thereof (with the exception of the MicaÎlas of Ellie Dehn and Erika Grimaldi, both established, elegant exponents of Mozart’s Countess). 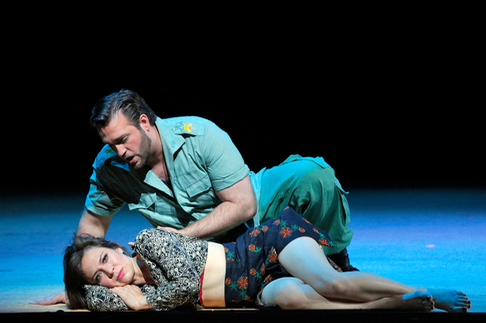 Irene Roberts as Carmen, Brian Jagde as Don JosÈ
Bieito’s emblematic tragedians were now young, real people, who recently perfected their roles in coaching studios. Director Joan Anton Rechi obliged their fine preparation with what would liked to have passed as a type of realism. The resulting movement on stage however read as practiced mechanical motion rather than as a gritty enactment of character realization. With no real character achieved by these too willing young artists no continuity of story emerged, leaving Bizet’s tragic masterpiece a series of unrelated musical numbers.
Italian conductor Carlo Montanaro relished the elegance of the esteemed San Francisco Opera Orchestra, finding a continuum of refined sound rather than capturing the changing moods and violence Bizet’s musical kaleidoscope. Tempos seemed too fast or too slow, or both at the same time. Both the flute and cello solos were self-consciously over-articulated destroying dramatic mood in search of elegance.
The San Francisco Opera Orchestra is a major ensemble, capable of plumbing the dramatic depths of the repertory, in fact you get the feeling it is straining at the bit to do so. Pairing it with an eviscerated production and a clueless conductor squanders this splendid resource.
Both of the Carmens, Irene Roberts and Ginger Costa-Jackson who alternate in the eleven performances are viable artists and both are real, ingenue Carmens. I particularly appreciated the variation of vocal color projected by Mlle. Costa-Jackson, and greatly admired the splendid voices and solid techniques of both artists. Tenor Brian Jagde sings ten of the eleven performances, many back to back, i.e. day after day. Tenor Adam Diegel sang one performance (May 28) in which he found some of Bizet’s hapless lover. Brian Jagde seemed too busy making great big tenor sounds — that wore us out over the long evening — rather than finding the humanity of this role. 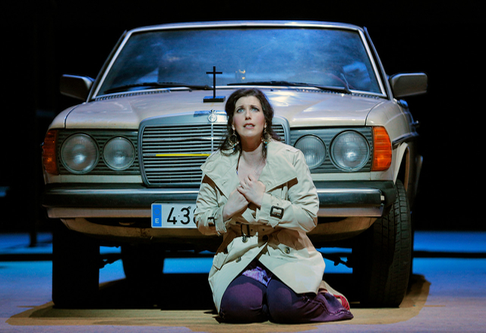 Ellie Dehn as MicaÎla
Italian soprano Erika Grimaldi was miscast as MicaÎla, though her “Je dis” on May 28 was beautifully and very elegantly delivered. On June 1 soprano Ellie Dehn was a-fish-out-of-water and in apparent vocal difficulty. Neither of the two Escamillos could fill the breeches of Bizet’s toreador, nor muster the required vocal coglioni — inexplicable casting. All supporting roles were responsibly sung, though cast without regard to the character needs of this Bieito production.
Michael Milenski