The
11-year history of the Washington Ring rivals Wagner’s own
trials in creating his tetralogy, mired as it has been in money problems,
changes in management, and clashes of personalities. Yet all seems now to have
been vindicated by the sold-out performances and almost uniformly superlative
reviews. Indeed, the production appears to have become a marketing boon for the
company. It was supported by an extensive educational and promotional campaign:
a themed Opera Ball, a glittering website, a pre-performance lecture series,
and even a pair of alpenhorns played (usually in tune) in the Kennedy Center
lobby prior to curtain.

Far from intending to inject a note of discord into the chorus of accolades,
I would open my own comments on the WNO Ring by saying that it was
hard not to be impressed by the spectacle of it all. After all, Wagner
identified Gesamtkunstwerk as the foundation of his music drama, and
there is nothing like the Ring to remind us of the complex and
multifaceted nature of a “complete work of art.” That said, the
sheer scope of the tetralogy also demands a broader vision – a master
narrative to subsume and justify all the lovingly crafted details. The impetus
for what Francesca Zambello called her “American Ring”
appears to have been her determination to embrace the undeniably epic scale of
the storyline, all the while exploiting the fashionable, socially conscious
trappings of Regietheatre – and sprinkling both, generously and almost
gleefully, with elements of a classic carnival magic show.

Both the triumphs and the pitfalls of this Ring, I would argue,
stemmed from navigating the balance between these disparate influences that
worked mostly in consort, but occasionally at cross-purposes. Wotan (Alan
Held), for example, easily adopted – and adapted to – each of his
multiple personalities and disguises: a hurried executive in Das
Rheingold, a clownish vagabond in Siegfried, a tragic King Lear
in Die Walküre all peeked through the veneer of the all-powerful
king of the gods. Yet, it was hard to take Donner (Ryan McKinny) seriously as
the God of Thunder when he was attempting to command the elements dressed in a
Great Gatsby-style pinstriped suit (costumes by Catherine Zuber), with
the homemade firework sparklers flying out of his hammer.

Particularly interesting to watch was a double counterpoint created by the
relationships between, on the one hand, the mythological and heroic-dramatic
layers of the tetralogy itself, and on the other, the epic vs. the gritty drama
in Zambello’s interpretation of it. While it was to be expected that
Das Rheingold and the finale of Götterdämmerung
would lean most heavily towards the epic, the director does not necessarily
follow Wagner’s dramaturgy throughout. Some of the composer’s most
densely leitmotif-packed moments of mythological storytelling (such as
Wotan’s monologue in Act 2 of Die Walküre and the prologue
to Götterdämmerung) eschew grandeur; more than one human
character dons an epic mantle, while the ugliness of the human world invades
the world of the gods.

And it is an ugly, ugly world Zambello conjures up for us (sets by Michael
Yeargan; lighting design by Mark McCullough). Her main theme, as she herself
suggests, is an environmentally conscious one. Wagner’s idea of nature
corrupted by greed is here presented, in both a visually compelling and a
literal sense, as pollution of natural environment by the uninhibited growth of
human industry; endless highways destroying forests, piles of (unrecycled)
garbage chocking up rivers, and factory chimney stacks blackening the sky. In
the finale of Das Rheingold we see the gods walk toward the glittering
skyscraper of their newly built Valhalla headquarters, while the Rhine maidens
bewail their fate at the foot of a cement monstrosity of the (Brooklyn?) bridge
leading up to it. Their faces and clothes are covered in soot: Alberich (Gordon
Hawkins) and the Nibelungs are, naturally, coal miners. The giants sport
Depression-eras construction worker overalls (to contrast with the suits and
flapper dresses of the champagne-sipping gods), their bodies an awkward yet
disturbing fusion of man and machine that reminds one of the Weimar Zeitopern
like Max Brand’s Maschinist Hopkins. 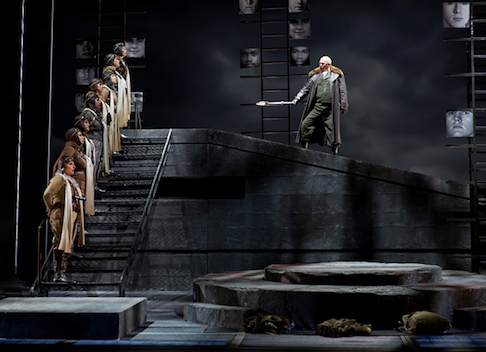 Alan Held as Wotan and the Valkyries [Photo by Scott Suchman]

While the gods are ensconced in their heavenly corporate boardrooms, the
human world of the tetralogy alternates between the depressing anarchy of a
dirty industrial cityscape and the oppressive order of a chauvinistic
militarized civilization. The final confrontation between Siegmund (Christopher
Ventris) and Hunding (Raymond Aceto) takes place in that most iconic of urban
milieux, under a bridge (the bridge from Das Rheingold, that is), as
Fricka (Elizabeth Bishop) watches, unmoved, from the top of the bridge’s
arch. Fafner’s cave is an abandoned factory, complete with a
post-apocalyptic mechanical “dragon” (a cross between an excavator
and a tank), in which Soloman Howard’s Fafner hides himself. Mime (David
Cangelosi) builds his forge in a trashed trailer park next to a land field.
This technically makes Siegfried (Daniel Brenna) “trailer trash”
– an image Zambello clearly endorses, presenting Wagner’s greatest
hero not as a pure child of nature, but rather as an irritating, ignorant
teenage bully who makes us wonder what Brünnhilde (Catherine Foster and
Nina Stemme) could possibly see in him (note: echoes of 2003 Stuttgart
Siegfried abound). Yet the Valkyrie herself – at least in
Foster’s interpretation I saw – is introduced to us less as a
Daughter of Wisdom and more as a mischievous imp. Indeed, it is her journey,
her transformation that becomes central to the storyline. While Siegfried is an
“accidental hero” who blunders blindly through his life, into his
love, and towards his death without understanding the point to any of it,
Brünnhilde grows – through her divine experiences in Die
Walküre, but more so through her human ones in
Götterdämmerung. And her human life exemplifies another
important theme in Zambello’s Ring: that of the subjugation and
liberation of women. While it is easy to see Sieglinde (Meagan Miller) as an
abused wife, as many directors do, Brünnhilde is no less so, particularly
as portrayed here against the backdrop of the aggressively male-dominated,
gun-totting Gibichung kingdom. It is notable, therefore, that the finale of
Zambello’s Götterdämmerung is virtually male-free.
Instead, it features the women of the kingdom, led by the newly worldwise
Brünnhilde, her now enlightened acolyte Gutrune (Melissa Citrom, whose
character comes almost unbelievably far from the bored alcoholic socialite of
Act 1, in bed with the half-brother Hagen), and the ever-present and
determined, albeit somewhat callous Rhine maidens. It is the women who build
Siegfried’s monumental funeral pyre by piling up mountains of garbage,
thus cleaning and purifying the polluted world, before we witness a young girl
– Earth goddess Erda, reborn – planting a sapling of the next World
Ash to start that world anew.

The symbolism throughout is rarely opaque; occasionally preachy; and often
powerful. Part of its potency, I think, lies in the way the natural world is
being represented. Ironically, it is here (and not, say, in the
Götterdämmerung prologue, in which the Norns vainly
attempted to repair the fiber optic cables of their thread) that Zambello most
closely embraces technology. Large-format computer-generated imagery projected
onto the front screen, backdrop, or both, accompany and connect multiple scenes
throughout the tetralogy (projection design by Jan Hartley and S. Katy Tucker).
Some of the imagery is virtually abstract: water, fire, clouds, gold, stone,
and other elements of nature continuously coalesce, dissolve, and re-form
again. Other images are more realistically concrete and darker, in line with a
gritty, literally “down-to-earth” atmosphere of the main
Ring trilogy, showing how fast the rising industrial civilization of
skyscrapers, factories, and highways can displace the natural world. Natural
imagery is still present in this form, however. We look down majestic canyons
(Zambello claims inspiration from the American West); wade into dense forests
(peaceful and sunlit in parts of Siegfried; yet in Die
Walküre chaotic and psychologically disorienting enough to be fit for
Erwartung, or at least Pelléas); and even hitch a ride
with the Valkyries, as the computer-generated clouds rush towards the viewer,
creating an illusion of flight during Wagner’s most celebrated
instrumental passage. Indeed, the CGI projections were at their most effective,
in my opinion, when paired with the purely instrumental portions of the
Ring. The aural-visual correlation was excellent, showing sensitivity
to the score and, perhaps, also to the limited attention span of a less
Wagner-trained portion of the audience. After all, it is not easy to make the
infamous 5-minute-long opening of Das Rheingold – which
consists, as any Wagnerite will tell you, of a reiteration of a single chord
– look, as well as sound riveting. 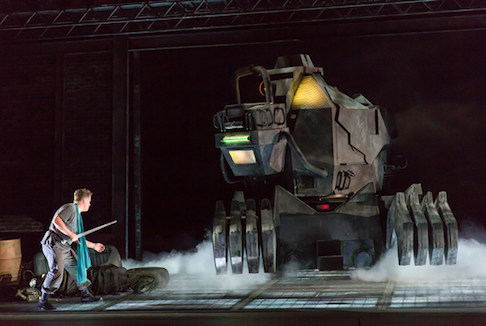 A scene from Siegfried

And speaking of riveting sounds, I would be remiss if I neglected to tip my
hat to the almost uniformly high quality of the performance, from both the
singers and (there is a WNO first!) the orchestra, forged by Philippe Auguin
into a formidable force. There are always issues in a live presentation, be
they occasioned by seasonal allergies that felled Held in Wotan’s
Farewell; rehearsal mishaps that made Foster’s poor Brünnhilde limp
through most of cycle 2; or simple fatigue – in Bayreuth it would be
inconceivable to demand that the brass players do three Ring cycles
back to back, as they did here. Yet overall, I was impressed with the care
taken in both auditioning and casting – most tellingly, the casting of
small parts: the Valkyries, the Norns, and particularly the Rhine Maidens
(Jacqueline Echols, Catherine Martin, and Renée Tatum). Echols (Woglinde),
with her almost inhumanly pure, vibrato-less coloratura was double-cast
superbly as the Forest Bird. Speaking of wildlife, I cannot tell you whether
there was a separate casting call for the (person-costumed-as) bear used in Act
1 of Siegfried, but the Wagnerites in the audience insisted it was the
best one they have ever seen. And yes, the bear did get a separate curtain
call. Hunding’s (real) hunting dogs from Die Walküre did
not; and honestly, that little detail I could have done without. Other
production niceties, however, were much appreciated, such as commendable
attention to the language: both the articulation of the German (in which the
comic talents of Cangelosi and William Burden as Loge particularly shined) and
the carefully crafted supertitles, tailored to reflect Zambello’s updated
setting (e.g., with the appropriately idiomatic mid-20th-century
American vernacular) and other directorial changes. 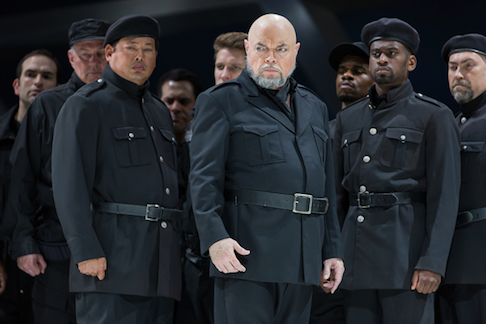 Scene from Twilight of the Gods

Overall, the Washington Ring showcased both respect for tradition
and interpretive freedom. The latter, of course, has arguably developed into a
tradition of its own over the past four decades, ever since
Chereau/Boulez’s infamous centennial Ring of 1976. Francesca
Zambello’s contribution to this revisionist directorial canon may not be
to every Wagnerite’s taste, but it is a worthwhile and a memorable one. I
hope this is not the last time we see it.