It began
when Figaro, dressed in modern clothes, walked up and asked me to hold one end
of a tape measure, pulled the other end across the room, signaled the conductor
for a downbeat, and began to sing: “Fourteen…” By the end of
Scene One, he and Susanna were going at it hot and heavy (still singing) on top
of a woodblock table. The audience then moved on to an elegant salon for the
second scene before concluding with Act Two in a grand three-story atrium.

The visionary founders of On-Site Opera (OSO) have a name for such intimate
performances in hand-picked spaces appropriate to the libretto:
“immersive opera.” They are betting that immersive opera will help
transform 21st-century opera. I am a believer, and I am not alone:
tickets to all five performances sold out in three hours. It is not hard to
understand why. Immersive opera offers a uniquely thrilling experience: singers
meet your gaze, brush you as they pass, and—even if it sometimes leaves
your ears ringing—sing just a few feet away. Of course big houses will
always be there for those who prefer opera singers to remain behind the fourth
wall. (And perhaps this approach will always be impractical for the grand
operas of composers like Wagner—though I would be tempted to see
Tristan und Isolde staged on the dark parapet of a windswept Brittany
castle, the audience huddled around the dying hero.) Yet for smaller-scale
operas, immersive opera recaptures—and often exceeds—the intimacy
of the tiny theaters in Italy for which many operas were originally
conceived. 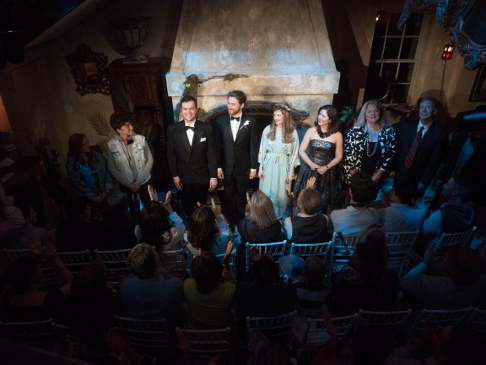 The folks at OSO do not simply perform operas in ways you have never seen.
They perform operas you have never heard. This was not Mozart and da
Ponte’s Figaro, but a version by Marcos Portugal. Born in Lisbon
in 1762, Portugal is arguably the most distinguished classical music composer
in the history of his native land. Once the toast of Italy, he supplied
theaters there with more than 40 operas in under a decade. Today he is largely
forgotten, though he did pen the first national anthems of both Portugal and
Brazil, as well as some lovely religious music. (Check out his Misse
Grande here).
Having become a Brazilian citizen, he died in Rio de Janeiro in
1830.

Portugal composed his Figaro for the opening night of the Venetian
Carnival season in 1799, thirteen years after Mozart’s version.
Gaetano Rossi, who supplied the text, surely knew the earlier libretto. Though
Rossi followed Beaumarchais’ title rather than da Ponte’s
(“La Pazza giornata, ovvero Il mattrimonio di Figaro” / “The
Crazy Day, or The Marriage of Figaro”) and recast the work as a two-act
opera buffa, he borrowed many of da Ponte’s revisions, additions
and cuts, as well as some of his wording.

Portugal’s score, however, cannot compete with Mozart’s. His
music is pleasing but hardly memorable—a pale imitation of Cimarosa,
Jommelli and other minor composers of the Neapolitan School. Occasional flashes
of melodic or harmonic inspiration in the countess’s aria, the letter
duet, and the two finales, for example, are not sustained. Nor did José
Luis Iglésias’s atmospheric reduction for an Iberian-accented
chamber orchestra (complete with guitar and accordion), commissioned by OSO,
fully convey Portugal’s modest orchestral innovations, for example his
treatment of woodwinds. Ultimately one could not help being reminded of the
exceptional genius of Mozart, and even of the winning qualities of second-tier
composers like Paisiello, whose Barbiere di Siviglia remained popular
for a generation and, as OSO demonstrated last year, still can enchant us
today.

Given the weakness of Portugal’s score, prime responsibility for the
performance’s success rested on its all-American cast of singers. The
English translation of the libretto by Gilly French and Jeremy Gray did not
ease their task. While it abounds with clever rhymes, its reliance on
Anglo-Saxon vowels rendered the text far more difficult to sing. I would have
preferred to hear the original Italian with supertitles, as OSO employed last
year.

In these challenging circumstances, three singers stood out. Houston-born
soprano Camille Zamora, a singer of wide repertoire and myriad musical
interests, perfectly embodied the wronged and vulnerable yet proud Contessa,
while phrasing every note with elegance and sensitivity. Margaret Lattimore, a
veteran of the Met and many other grand stages, gave a veritable lesson in
stage technique, scaling down a large warm mezzo to the intimate setting and
effortlessly acting circles around singers two decades her junior. Melissa
Wimbish, a Baltimore-based mezzo who specializes in contemporary music and
sings Indie Rock on the side, made an uncannily convincing Cherubino. Her
commitment to immersive opera is so great that when I met her on the stairwell
after the performance, she remained in character.

Other members of the ensemble offered spirited accounts. The extensive
experience of Michigan-trained baritone Jesse Blumberg as a Lieder singer
showed in his soft-grained and elegantly sung Figaro. Experienced bass-baritone
David Langan displayed crisp diction and suave manner as lawyerly Don Bartolo,
while Mannes graduate student Ginny Weant made the most of a chipper cameo as
Cecchina (da Ponte’s Barberina). Enthusiastic Antoine Hodge was vocally
assured in the dual roles of Antonio and Gusmano (da Ponte’s Don
Curzio).

Sometimes, however, immediate proximity can highlight vocal limitations in
young singers whose voices have yet to smooth out entirely. Jeni Houser brought
impressive technique to Portugal’s Susanna, a lyric coloratura soprano
role, but her high notes sometimes sounded edgy in the small space. The same
was true of tenor David Blalock, who returned from the cast of last
year’s Barbiere to portray again the (now slightly older but
surely no wiser) Conte Almaviva. OSO Music Director Geoffrey McDonald conducted
with customary assurance.

Portugal’s Figaro marks the midpoint of OSO’s
three-year Beaumarchais trilogy. It began last June with the Paisiello
and will end next June with Darius Mihaud’s Le Mére
Coupable.(The location is still to be announced.) Along
with Massenet’s Cherubin, these two works are the best of many
operas not by Mozart or Rossini that draw on the Beaumarchais characters.
I’ll be there, but I hope thereafter that OSO upgrades to canonical works
of greater proven quality, which should further intensify the immersive
experience.

OSO faces one final issue, namely how to manage the list of disappointed
patrons left outside—reportedly more numerous than the lucky few who made
it in. Why not do the Met one better and double down digitally? OSO might beam
future performances as they happen to an overflow space with a bank of large
screens, a great sound system, and a hip mixologist behind the bar. Now that
would be 21st century opera!

All photos courtesy of Pavel Antonov