Such to my mind was the world premiere of Sidi Larbi Cherkaoui’s
staging of Rameau’s Les indes galantes for this summer’s
opera festival at the Bavarian State Opera in Munich.

M. Cherkaoui, a Belgian of Moroccan descent, has been dancing since he was 13; he won his first major prize as a performer when he was 21 and has received awards for his choreography—the Kouros in 2009, two Oliviers (in ’11 and 14) with almost monotonous regularity. He is a
handsome, personable, articulate media magnet, whose work, immediately
accessible seamlessly blends classical steps, modern dance intensity, and
street moves.

He is also an insanely talented choreographer, probably the most gifted and
distinctive to emerge since the American Mark Morris burst onto the
international dance scene on the stage of Belgium’s Theatre de la Monnaie
a quarter century ago. With his first operatic staging, he has established
himself a master of this most difficult of dramatic arts, and done so with a
work from the French opera-ballet repertory, arguably the most challenging form
for a stage director or choreographer in all the lyric theater
repertory.

The society that gave birth to the French operatic repertory is as
dead-and-gone as Akhnaten’s Egypt. The grandeurs and absurdities of
Parisian grand opéra swept away the huge repertory of
tragèdie lyrique and comèdie ballet and all but
ground to dust the performing tradition upon which the depended. The
“comeback” of this repertory over the last 40 years is even more
astonishing in light of the plain fact, widely recognized though rarely
acknowledged, that many revivals of works of the period 1660–1750
productions have succeeded on purely musico-dramatic grounds, with their huge
choreographic element either unsupportive of or actively discordant with the
overall experience. 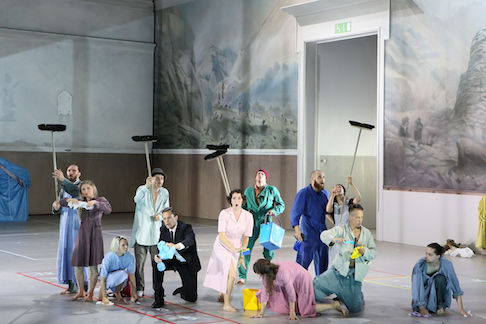 There are good reasons that so many of these stagings found themselves so
artistically conflicted. The most powerful choreographic trends of the period,
particularly in the Francophone nations of Europe, were indifferent to or
actively hostile toward the old values of grace and musicality in dance: rough,
spasmodic, angular, abstract movement was all but compulsory for a dance-maker
to be considered serious and important.

Anybody who has come to love the dance-operas of Lully, Charpentier, and
Rameau can also recall the embarrassment, anger, and boredom occasioned by
stagings in which dance and music and drama were, if not in open war, at most
grudging and awkward collaborators.

And the same lovers of this repertory can recall moments when suddenly the
warfare ceased: when all the elements melted together and if only for a little
while, released the intoxicating perfume of this art at its most elevated.

It is fitting that M. Cherkaoui hails from the anti-beauty heartland of
modern dance. His work in Les indes galantes embraces every dance
fashion and trend of the last 40 years and harmonizes them because he’s
not thinking about them but about the ever-passing moment of the music. His
movement exalts the human figure, celebrates human interaction, energizes the
stage picture from back wall to apron, wing to wing, flies to floor.

M. Cherkaoui’s approach to librettist Louis
Fuzilier’s string of loosly-connected illustrations of true love in
exotic climes is to melt them together, retaining the amorous spirit but making
the individual tales of pasha and slave-girl, Inca prince and temple-maiden
etc. fragments floating on a continuous spate of images.

The setting is a drably furnished école élémentaire:
uniformed students in their battered desks, informative maps and charts on the
wall, hard-working teachers and staff going about the pedestrian essentials of
creating new citizens for France.

And that is the only moment is the show that might be called pedestrian.
Rameau’s music blows through this space, suggesting and supporting a
flickering series of visions of a world in flux, peoples displaced, cultures in
conflict. The overall effect is to portray a universal struggle for stability,
safety, repose. And at every moment the tone is set by Rameau. The movement
seems only the inevitable consequence: the touchstone of great choreography in
any age. 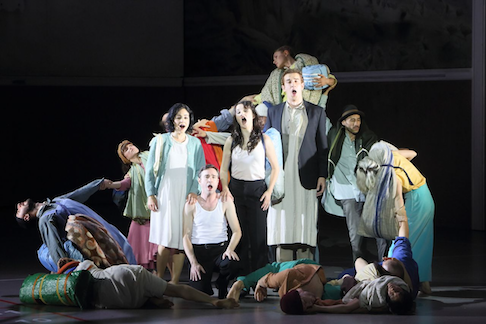 The use of contemporary popular dance forms is not new in this repertory:
José Montalvo’s 2004 staging of Rameau’s Les paladins
for the Châtelet was non-stop hip-hop, visually dazzling but utterly
failing to provide anything but dazzle.

The difference from the Munich Indes galantes could not be more
striking. Cherkaoui has found a movement synthesis which moves: the
dazzle is just a delightful extra. What seems at first a high-handed way with
the dramaturgy of the work proves to be the best way I have ever encountered in
this repertory to break through to its enduring essence.

I believe that soon this exemplary staging—all hail the Bavarian State
Opera for its courage and dedication in mounting it—will soon be seen as
a milestone in the revival of French baroque theater on a par with the 1987
Atys of Jean-Marie Villégier and William Christie. One of the commonest
tropes of Baroque dramaturgy is the ever-troubled alliance between the arts of
music and dance (the first act of the Molière-Lully Bourgeois
gentilhomme is the locus classicus). M. Cherkaoui appears like a
god from the flies to join their hands once more after too long a divorce.