Annabel Arden’s production, designed by Joanna Parker, was adapted by Sinead O’Neill. Enrique Mazzola conducted the London Philharmonic Orchestra, placed
to the rear of the stage, with Danielle de Niese as Rosina, Alessandro Corbelli as Dr Bartolo, Taylor Stayton as Count Almaviva, Bjˆrn B¸rger as Figaro,
Christophoros Stamboglis as Don Basilio, Janis Kelly as Berta, Huw Montague Rendall as Fiorello and Adam Marsden as an Officer, plus the men of the
Glyndebourne Chorus.

I have not seen Annabel Arden’s production at Glyndebourne, but Sinead O’Neill had successfully created a vibrant and all-encompassing staging (there was
little that was semi- about it) which involved both the orchestra and conductor. The evening was full of laugh out loud moments which seemed to fill the
Royal Albert Hall (no mean feat with a comedy designed for a far smaller space).

The problem was that Arden seemed to have taken her cue from the staging of the Act One finale. In most productions I have seen, this is given in a highly
stylised and choreographed manner. It was no different here, Arden (and director of movement Toby Sedgwick) created an almost hyper-active physical
commentary on the music, creating a very funny ensemble. But Arden transferred this style to the whole opera, each solo and each ensemble was highly
choreographed and the whole evening became a long sequence of physical theatre. The addition of three actors to the cast (Tommy Luther, Maxime Nourissat
and Jofre Caraben van der Meer) emphasised this as the three were rarely absent from the stage, either as carnival figures in the opening and closing
scenes or as three extra servants in Doctor Bartolo’s house

I have great admiration for the performers because all concerned brought off the conception superbly, combining fine musicianship with brilliant theatre.
The problem for me was that somewhere along the line, Rossini’s sense of character seemed to disappear. One of the reasons why the opera has remained so
popular is that Rossini manages to combine a sense of fun with a real feeling of drama so that the comedy and the music arise out of the situation. By the
end of the opera I was no clearer who these characters really were. For all Taylor Stayton’s charm in performance, without a feeling of dramatic context we
had little idea who the Count really was.

To take a couple of examples. In the Act One where the Count first encounters Figaro (a scene culminating in the duet ‘All’idea di quel metallo’) we
received no sense of the social hierarchy, that Figaro had once worked for the Count. Instead Bjˆrn B¸rger and Taylor Stayton interacted as equals. And in
the climactic Act Two trio when Figaro and the Count climb up the ladder into Rosina’s room in order to rescue her, Rossini sends up opera seria convention
so that the Count and Rosina have a classically structured duet complete with the necessary repeats, whilst Figaro must wait impatiently on the sidelines
hurrying them up and sending up their music. Here all three performers were highly physical and we had no sense of the two worlds meeting. 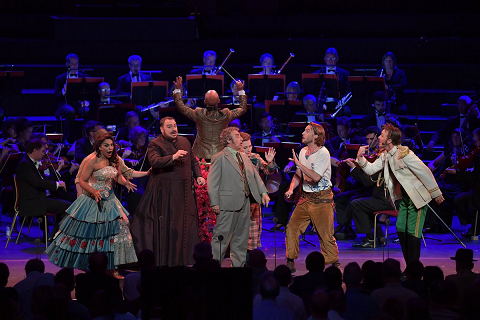 For all its use of Alberto Zedda’s critical edition, and the presence of a forte piano in the continuo, this was a rather traditional version of the opera.
The Count did not get his final aria, alas, and Rosina was sung by a soprano (rather than mezzo-soprano) complete with the alternative aria ‘Ma forse,
ahimË’ in Act Two.

Changing Rosina from mezzo-soprano to soprano usually means the character moves from rich-voiced spitfire to pert charm. Danielle de Niese successfully
re-made the role in her own image, using her lustrous eyes to great expressive effect and emphasising both Rosina’s great personal charm and her physical
attraction. De Niese also seems to have got first go at the dressing up box, with a series of striking costumes. Overall, I felt that Danielle de Niese’s
Rosina was perhaps a little too pleased with herself and we could have done with more of the spitfire. ‘Una voce poco fa’ was sung with confident style
though the aria sat a little low in De Niese’s voice and could have done with an upward transposition. As it was, on the repeat her ornamentation pushed
the tessitura up significantly. De Niese has a great sense of style in this music, but her execution of the fioriture was a little uneven. Sometimes she
produced passages of pin-sharp coloratura such as the duet with Bjˆrn B¸rger’s Figaro, but too often her delivery was rather vaguer in outline and lacked
the sense of precise detail which was ideal in the role. ‘Ma forse, ahimË’ which was written by Rossini for a soprano and which prizes line over
coloratura, De Niese really showed what she can do.

Taylor Stayton made a highly personable Count Almaviva, combining physical charms with a strong technique. His opening aria ‘Ecco, ridente in cielo’
demonstrated a slim-line tenor which he used elegantly, with a superbly confident sense of style in the ornamentation. My only real complaint was that we
could have done with a greater variety of colour. Stayton showed himself capable of lyric beauty too in the Count’s second serenade. He had a nice sense of
comic timing in the disguise scenes, and in the Act Two trio with De Niese and Bjˆrn B¸rger, Stayton and De Niese really made the Count and Rosina’s duet
sparkle, adding some rather steamy action. 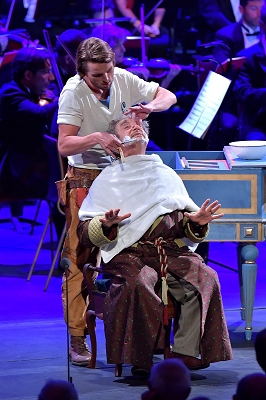 Bjˆrn B¸rger was a name that was new to me; he is a young German baritone and is a member of the ensemble at Opera Frankfurt. He has an attractive,
narrow-bore baritone which he used with great bravura and a lovely ease at the top of the range. His ‘Largo as factotum’ combined musical elan with a great
sense of character, as well as being very funny. B¸rger confidently combined a highly physical performance with a musically appealing one. This was a
Figaro who seemed easily in control, yet B¸rger’s Figaro was also a delight to listen to.

Alessandro Corbelli is a veteran as Doctor Bartolo, and his combination of comic timing and musical felicity was effortless. He had the audience in the
palm of his hand whenever he was on stage, yet there was no pulling of focus, this was very much an ensemble performance. Perhaps his performance was a
little more one-sided than usual, thanks to the highly physical nature of the production, this was a Doctor Bartolo who was very funny throughout, and
there was less of the sense of feeling sorry for the old fool that can happen in some performances. But there was so much to delight, whether it was the
over-done charm in the arietta ‘Quando mi sei vicina’ or his lovely way with the recitative.

Christophoros Stamboglis was somewhat disappointing as Don Basilio. His tuning was not ideal in his calumny aria, but then transferring from Glyndebourne
Opera House to the Royal Albert Hall with minimal rehearsal cannot be easy. He made Don Basilio delightfully pompous, and though ‘La calunnia’ was also
somewhat effortful, he brought the piece to a great climax.

Janis Kelly was rather luxury casting as Berta, and she made her single aria into a wonderfully show-stopping number. Huw Montague Rendall and Adam Marsden
(both from the Glyndebourne Chorus) contributed strong performances as Fiorello and the Officer.

This was very much an ensemble production, and the cast’s sense of communal timing and great physicality made it a lovely piece of theatre. The recitative
was done very vividly, though sometimes I would have liked a greater feeling of pace. The continuo from Alessandro Amoretti and Pei-Jee Ng was supportive
without drawing attention to itself.

Enrique Mazzola and the London Philharmonic Orchestra gave a suavely characterful account of the overture, though it was not the most comically pointed of
performances. Here and elsewhere Mazzola seemed to rather like a lot of percussion (mainly drum) in the mix. Throughout the evening the balance was not
ideal and though the orchestra was behind the singers, there were too many moments when the balance favoured the orchestra.

The high musical values of the production make it well worth seeking out on BBC iPlayer (where it will be around for 30 days), but in the theatre the
over-busyness of the production became a little too much and I felt rather self-defeating. In the end though, I had to admire the entire cast for their
energy and commitment, and the superb way they combined the physical with the musical.