Laurent Pelly’s new production for Glyndebourne is certainly capricious: updated to a vague and varying period during the first half of the 20th
century, the costumes embrace Edwardian elegance, ’40s Dior ‘new look’ radicalism, and de Gaullian militarism. But, Pelly’s surreal, monochrome hinterland,
constructed of wedding-gift boxes – a sort of posh ‘cardboard city’ – from which characters emerge like jacks-in-the-box, offers none of the golden warmth
of Shakespeare’s Sicily.

Instead, we have a ‘Fifty (at least) Shades of Grey’ palette worthy of a Farrow & Ball marketing catalogue. At the opening, when the Chorus burst from
two large boxes and fling forth a joyful sicilienne to celebrate the arrival of peace, even their vigorously flapping Tricolores are
tint-less, deprived of their revolutionary colour symbolism. Arriving at the wedding ceremony which concludes the opera, the guests look as if they’ve been
dragged down a Dickensian chimney-stack.

Colour, as Pelly explains, ‘emerges from the music’, but his design and concept betray no awareness of the Sicilian balminess that is built into the score
by way of the distinctive orchestration and native dance rhythms. There is no bitterness in Berlioz’s opera but Pelly gives us a storm-cloud back-drop
which offers no intimation that the apparently imminent tempest will give way to the clear blue skies of nuptial bliss. Visually, this production presents
not a ‘merry war’ but mirthless gloom.

Pelly imagines the bickering protagonists as ‘two rebellious people who refuse to fit into a mould and live in a “box”’, and the characters as ‘puppets’
within a ‘slightly unreal social ritual’. But, how are we to believe in these characters? The romantic dilemmas and dramas, conflicts and conciliations, of
Beatrices and Benedicks have been box-office sure-fire hits since Shakespeare created his originals precisely because we can empathise with their emotional
upheavals and appeasements.

Pelly puts all his eggs in one basket – or, dare I say it, box. The Glyndebourne Chorus – in wonderful voice – clamber in and out of these boxes, which
Pelly conceives as containers of, and conduits to, conformity and domesticity. But more direction is needed for an opera which has hardly any plot – even
though its spoken dialogue is drawn directly from Shakespeare – and the arias of which are largely static. The incessant re-arranging of the towers of
teetering boxes assumes the choreographic complexity of a shipping dock in a busy freight port, but the human interplay gets lost in the carousel
of cartons and chests.

In this opera, so much depends upon BÈatrice, and how she is dramatically conceived: fortunately, StÈphanie d’Oustrac (last year’s Carmen) blends Gallic
hauteur with elegance of wit and attire, and possesses a mezzo which can explode fierily, brood portentously and float contemplatively.

She made her mark dramatically in Act 1, but it was not until her Act II aria, ‘Il m’en souvient’, in which BÈatrice recognises the nature and extent of
her hitherto repressed feelings, that the range of d’Oustrac’s vocal expression was fully exhibited: tenderness sat side-by-side with strength, though the
sound was never forced; there was diversity of colour and an impressive sense of the long line of Berlioz’s phrases. As the armour protecting her heart was
pierced by Cupid’s stubborn arrow, d’Oustrac conveyed BÈatrice’s real sense of fear: where will the release of repressed sentiments lead her? When
the truth revealed itself, the shocked BÈatrice grabbed a chair to defend herself from the alarming emotional onslaught – a melodramatic gesture which
was at once comical, charming and touching. Then, as the off-stage wedding hymn wafted dreamily, d’Oustrac was a portrait of contemplative serenity as
graceful supernumeraries balletically removed the detritus of the incompetent music-master Somarone’s feast in a beguiling silent charade around the seated
dreamer. Yet, BÈatrice’s impetuosity was as much a part of her submission as of her opposition: she recklessly dashed off a signature on the wedding
contract which tied her in matrimonial subservience, embracing love as impulsively as she had resisted the amorous dart. 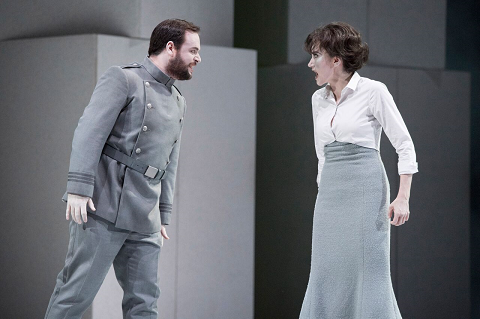 As BÈnÈdict, American tenor Paul Appleby just about held his own in the face of d’Oustrac’s dramatic intensity, parrying her acerbic verbal thrusts with
pointedness, if not much clout in Act 1. At times he seemed under-directed: BÈnÈdict lurked unresponsively when he overheard his buddies speaking of
BÈatrice’s love for him. But, if Appleby demonstrated little sense of French style, his tenor is sweet-toned, ardent and flexible, and he offered masculine
arrogance a-plenty. BÈnÈdict’s exuberant aria, ‘Ah! je vais l’aimer,’ was vigorous and clear. Unfortunately, in Act 1 the skirmishes between the sceptical
pair lacked an enervating frisson, though there were some piquant touches, as when, ordered to leave by her contra-amour, BÈatrice stomped off in the
opposite direction. But, as the proportion of music to spoken dialogue increased in Act 2, the rapport between the warring lovers became more absorbing,
and the final Scherzo-Duetti, ‘Oui, pour aujourd’hui la trÍve est signÈe; Nous redeviendrons ennemis demain’ (Yes, for today a truce is signed,
We’ll become enemies again tomorrow) was delightfully sparky.

Sophie Karth‰user, replacing HÈlËne Guilmette, took a while to settle into the role of HÈro, and didn’t capture the excitement or splendour of her Act 1
aria ‘Je vais le voir, je vais le voir!’ But, the end-of-act moonlit serenade, ‘Nuit paisible et sereine!’, in which she was partnered by Katarina Bradi?’s
dulcet Ursule, was exquisite. I was torn between admiring Pelly’s coup de thÈ‚tre, as the two excited girls drew back the walls of yet another
box to reveal a Dior wedding gown bathed in golden light – some colour at last to counter the pitch-black sky and glaring pendant globes of ‘star-light’ –
and regretting that the visual spectacle distracted, and detracted, from the poignant mingling of pain and pleasure in HÈro’s heart as she contemplates the
bitter-sweetness of true love. Berlioz replaces Shakespeare’s Dogberry with the asinine music-master Somarone, and the latter’s involvement in the wedding plans is perhaps better
integrated into the action than the Master of the Watch’s malapropisms and mishaps. Lionel Lhote was a portrait of puffed-up, pedantic mediocrity, and his
exhibitionism injected some much needed levity, if at times it strayed into farce – Somarone’s drinking song, ‘Le vin de Syracuse, Accuse, Une grande
chaleur’, ended with a perfectly-timed exit atop the banqueting table, narrowly avoiding decapitation. As Lhote conducted his grotesque epithalamium
with pompous self-absorption, flinging out furious commands at the orchestra and urging his singers to ‘milk the ecstasy’, the musical jokes reminded us of
the artifice of the plot.

Philippe Sly has little to do as Claudio – except provide HÈro with her sole topic of conversation – but his warm baritone made a strong contribution to
the Act 1 trio, and FrÈdÈric Caton was an authoritative Don Pedro. As LÈonato, Georges Bigot was characteristic of all the cast in delivering the French
text idiomatically. 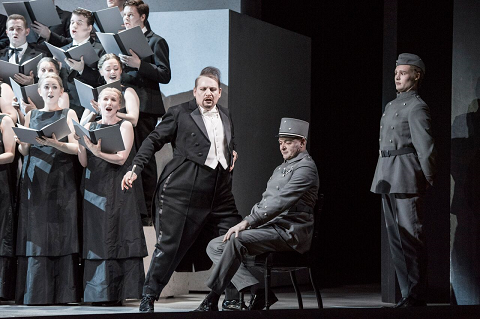 Replacing Robin Ticciati (who is recovering from back surgery), Antonello Manacorda made an auspicious Glyndebourne dÈbut in the pit. The overture didn’t
quite tease and delight as it should, but once things got going he revealed a sure sense of the nuance and detail of Berlioz’s gossamer score.

Berlioz concluded that the opera shows us that ‘madness is better than stupidity’. BÈatrice’s conversion is inspired not, as in Shakespeare’s play, by
BÈnÈdict’s defence of HÈro’s honour and virtue but by Love – ‘a torch, a flame, a will o’the wisp, coming from no one knows where, gleaming then vanishing
from sight, to the distraction of our souls’. Perhaps Pelly’s surrealism does capture this sense of strangeness, but while the singing offers much joy,
visually this defeat of romantic scepticism is a melancholy affair.

The performance on 9th August will be screened in cinemas and online: