The answer would be found in Des Moines Metro Opera’s incandescent production of OrphÈe et Eurydice. Under Chas Rader-Schieber’s inspired direction and Gary Thor Wedow’s stylish baton, the plentiful artistry on display gives plenty of cause for celebration.

First and foremost, what a treat it is to see DMMO take a chance on a piece that many opera enthusiasts may know of, but never get a chance to experience. This operatic game changer is best known for the mezzo’s set piece Che faro senza Euridice, excerpted from the Italian version. This production, presented in the French version is a reminder, nay revelation of Gluck’s musical genius, and proves a powerful souvenir of a golden age of explosive creativity. 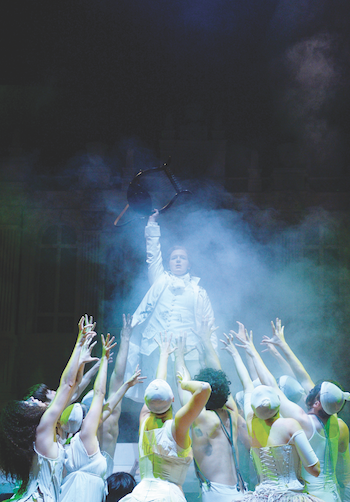 Jennifer Johnson Cano and the Furies

Mr. Rader-Schieber has endowed the staging approach with a striking, yet delicate balance of sobering introspection and mythical whimsy. The stage configuration of Simpson’s College’s Blank Performing Arts Center can prove a challenge, bisected as it is by the orchestra pit. The main stage is connected to the thrust by walkways on either side of the lowered pit. The director addresses this limitation by exploring a wide variety of performer placement and continually morphing choral groupings.

In an awesome display of subtlety and nuance, he managed to create well-motivated movement that kept the pictures in flux so that all three side of the horseshoe seating were engaged and visually satisfied. Jacob A. Climer’s handsome, evocative, and frequently dazzling sets and costumes perfectly matched and amplified the director’s artistic sensibilities.

The picture of Mr. Climer’s cool, white cemetery building with decaying wrought iron fence was intersect by a pick-up-sticks like scattering of slender white trees, slightly akimbo. On the thrust is a rectangular grave with a mound of fresh dirt, studded with votive candles. As a white clad, grieving OrphÈe keens his opening aria, he at first claws at the dirt, then wipes his hands on his clothing, as if wanting to desperately connect with the earth that covers his beloved wife. This was just the opening salvo in several rounds of powerful imagery.

This grave recedes downward and when the trap raises again it bears a writhing chorus of Hades demons who remain submerged waist-level until dancers ooze-crawl onto the stage and proceed to enact a ritual of death. An unsuspecting and unwilling mortal gets roughly stripped of his clothes (read: life) and gets passed, all but naked, down the mosh pit of choristers to death’s realm. The characterful, stylish dances and movement were choreographed with insightful skill and elegance by Jillian Foley.

The festive serenity of the Elysian fields is realized in a hot red palette that could not have been further from the restive handsome cemetery. The chic black court attire is here accented with headwear (and a touch of red) cleverly suggesting deer, rams, goats, and the like. Set pieces were limited to matching red-trees in weighted boxes that could be configured (and re-) to vary the playing area. These stylized bucolic gestures were a perfect complement to the radiant, fairy-princess-perfect gown that adorned Eurydice in gradations of pink.

After her husband breaks his vow and looks upon her, the effect of Eurydice’s death, was brutally blunt and stunning. She was positioned with her back to us upstage on a platform facing OrphÈe, collapsed onto him, and then sunk into death as she tumbled backwards and downwards on the red stairs. But the evening’s coup de theatre was yet to come. The graveyard faÁade flies back in separating OrphÈe from Eurydice once more as it isolates him to sing his famous lament. 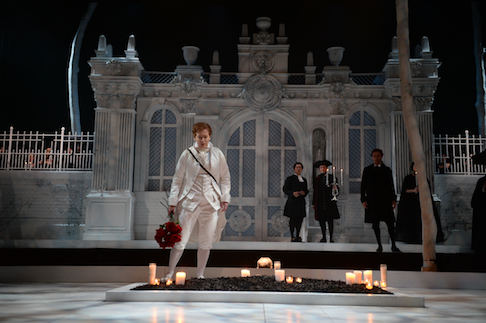 Partway through the aria, red rose petals began to fall into the open grave on the thrust. Then they escalate to a flurry as the original rectangular grave reappears, this time covered with a mound of petals. Well, when the winged Amour (clad in eye-popping, shiny gold) brings the heroine back to life one final time, he does so by reaching deep in the mound of petals and drawing out the actress in a matching red gown as the petals cascaded all ‘round. Yes, there were audible gasps. All of this stage magic was flawlessly enhanced by Nate Wheatley’s superb lighting design, and Brittany Crinson’s well-judged make-up and hair design (for Elsen and Associates).

In the pit, Maestro Gary Thor Wedow infused the musical reading with passion and immediacy. Performances of this genre can sometimes become precious, reverential, or worse, irrelevant. But Mr. Wedow encouraged a rendition full of buoyant freshness and dramatic vitality. His instrumentalists responded with equal doses of plangency and panache. Lisa Hasson’s wondrous chorus sang with a full arsenal of well-calculated effects from full-throated joy, to satisfied contentment, to sympathetic bereavement, to satanic vitriol. Bravi tutti. With the title role soloists, we were blessed to have two singers at the top of their game and on the cusp of their fame.

In a time that many young singers sound polished but somewhat monochromatic, no one seems to have told Jennifer Johnson Cano to play it safe. Ms. Cano’s highly individual OrphÈe was a star turn of significant proportions. Her burnished mezzo has it all: size, color, agility, evenness and individuality. She effortlessly tossed off coloratura with elan as well as meaning, filled the house with refulgent phrases, and drew us into her despair with barely audible vocal effects. She tears into the part with such abandon that occasionally a bit of huskiness intrudes in her powerful lower voice, but oh my, this was a towering, personalized performance.

Susannah Biller is every bit her equal as a radiant, golden-toned Eurydice. Ms. Biller finds every modicum of charm, grace, and poise in her characterization, and is mightily impressive as her elation inexorably turns into heart-wrenching despair. Her secure, gleaming soprano encompassed a wide range of musical colors and she was able to ply her voice to create any number of admirable dramatic effects.

Rounding out the principals, Cree Carrico’s clear, shining soprano was an ideal match for the requirements of the small but indispensible role of Amour. Her poised, focused tone vocally matched her winning, spunky personality. Ms. Carrico made the most out of every second she was on, exuding an infectious and charismatic stage presence.