Now in its third year, DMMO has endeavored to make these smaller gems more immersive experiences by matching subject matter of the operas to an appropriate venue. To that end Philip Glass’s Galileo Galilei was housed in the Des Moines Science Center. Last year’s Rappaccini’s Daughter about a misguided gardener was set in the Botanical Gardens.

This is an idea that was obviously sewn on fertile ground, for performances I attended each year were packed out. The quality of the experience and the opportunity to hear unique repertoire are proving to be a potent lure.

The production of Galileo Galilei could hardly have been bettered, starting with a mesmerizing musical realization of the Glass ‘formulaic’ score. You pretty much know what you are going to get from this composer: repetitive arpeggiated phrases, accented rhythms challenged by other percussive stings, staccato commentary, sustained chords serving as a different kind of cantus firmus.

Under the steady baton of Michael Sakir, every calculated effect was carefully allowed its proper place. There is a different Glass sound to this score, the small orchestra comprised disproportionately of lower voices. There is an occasional, welcome brightness from higher winds, but the overall effect was a preponderance of a restless weightiness, in both music and Mary Zimmerman’s text.

That the music-making never became ponderous was a great credit to the poised, polished playing. Maestro Sakir’s concentration never wavered and he led his amassed forces through the complex writing with insight and skill. He was in full command of the most minute shifts of the sound palette, and he found a wonderful build to the final expansive choral statement. I only wished that he had not paused quite so long between scenes. The composer did not put musical “buttons” on many (any?) scenes, and the forward motion of the piece was sometimes interrupted by applause, to fill an uncomfortably odd silence. 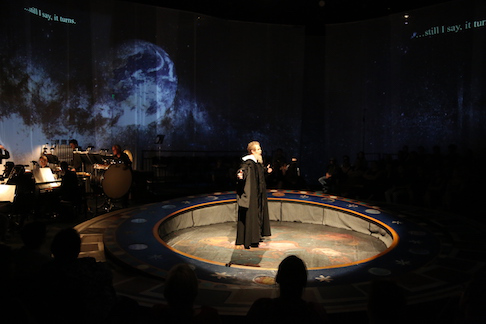 Chris Carr as the Older Galileo

Every single element of the design was top tier. The production was presented in arena style, and set designer Adam Crinson created a playing space that was simple but highly practical. Mr. Crinson used Galileo’s drawing for decorative inspiration of a circular “stage,” consisting of a circular platform/ramp within another circular platform/ramp tilted in opposition to each other. These “rims” enclosed a central “pit” with a mosaic-like painting on its floor. The ramps were of a perfect height for actors to sit on them, and provided a circular walking space around the perimeter of the action.

With the orchestra placed at 12 o’clock, a horseshoe of tiered seating surrounded the stage. The designer encircled the entire space in an ethereal hanging of floor-to-ceiling scrim panels, upon which was projected a non-stop cornucopia of images relating to Galileo’s life and work. Barry Steele’s masterful lighting and projections were a model of excellence.

To add to this embarrassment of riches, Aryana Petrashenko has designed sumptuous costumes that are not only strikingly attractive but which also immediately define the characters. The beautifully judged set pieces were the icing on a very rich cake. This was quite simply one of the most perfectly realized opera designs I have seen in many a moon, in total service to the composition.

Given this true feast for the eyes, we might not be blamed were we to come out “humming the scenery.” But director Octavio Cardenas and his talented cast have accomplished a considerable success in performing this rarity with dedicated passion and precision.

Mr. Cardenas found no end of diverse uses for this space, and its limitations seemed to be liberating as he cleverly place the singers in any number of varied groupings and poses. Every possible entrance was utilized, the height of the ramp versus the depth of the pit was exploited, and a myriad of highly theatrical presentations impressed. The haunting look of the four empty birdcages on sticks, the administering of the ‘irons’ that suspend and punish Galileo, the evocation of three people in a Venetian gondola suggested by two chairs and a paddle, all were magical.

While sightlines were otherwise carefully managed to accommodate the surrounding audience, only the final static choral position blocked the view of “the Galileo’s” in the pit. Perhaps a bit of motion could have remedied that but all told, this was a breathtakingly inventive staging. 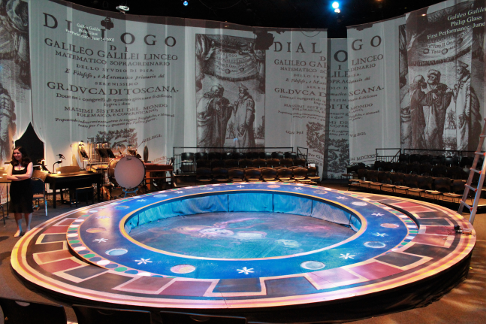 The singing was of a very high standard. As Old Galileo, Chris Carr’s compact, stirring tenor had a smooth and easy delivery with commendable legato, suggesting the resignation of a mature man. Troy Cook has a fluid baritone of substantial tonal beauty. Mr. Cook informed Younger Galileo with a firmly voiced passion for scientific truth and justice. The two singers complemented each other beautifully as different aspects of the fascinating title character. Rounding out the trio of Galileos (Galilei?), Camron Bennington brought a fine, focused presence to the Child Galileo.

Tony Dillon gave his usual solid performance as Pope Urban and Cardinal Barberini, his rich bass-baritone capable of considerable heft and meltingly beautiful sotto voce effects as required. Bryan Pollock (Cardinal 1/Oracle 1) has an easily produced countertenor which he was able to vary in tone from reedy warmth to edgy body. Other than that, the show was a feast of excellent baritone showcases. Reuben Lillie (Salviati) enlivened the Venetian trio with a memorable turn that was marked by bravado and characterful phrasing. His virile sound was well-served by a reliable technique.

Conor McDonald (Servant/Oracle) impressed with a steady, forward-placed baritone, especially as he intoned a relentless solo passage circling around the action on auto-pilot. Baritone Spencer Reichman (Servant/Oracle 2) has a pleasant, burnished delivery that not only produced some highly charged solo passages, but greatly enriched ensemble work. Rounding out the men was a noteworthy contribution from baritone Reuben Walker with his assured, musical singing as Cardinal 2.

On the distaff side, there was also much to admire. Ashly Neumann pretty much nailed her first extended solo as Maria Celeste, vanquishing the demands of the high tessitura with a ferocity and laser-focused soprano. At times, it was perhaps a little too focused as a hint of steeliness crept in. Ms. Neumannn’s later, more introspective singing was marked by a more pleasing and rounded sound. Emily Tweedy’s Duchess Christina is also required to come on like gangbusters, which may have infused her resonant soprano with a somewhat generous amount of vibrato. As she (and the music) relaxed into her assignment, Ms. Tweedy contributed passages of genuine beauty and control.

Melisa Bonetti is possessed of a warm, supple mezzo that struck all the right impressions, first as a self-assured Scribe, and later as a rather imperious Maria Maddalena. Cree Carrico’s turn as Sagredo was infectious and appealing, her bright, well-schooled soprano sporting zing and polish. I wish Ms. Carrico had put just a bit less weighty effort into being “important” as Eos as her lower voiced singing tended to harden under pressure. Andrea Baker made the most of her stage time with a cleanly voiced Marie de’Medicis.

All photos courtesy of DMMO