It’s a troubling question, as Iain Bell’s opera In Parenthesis, presented by Welsh National Opera at Covent Garden the evening before, further
underlines. Commissioned to celebrate WNO’s 70th anniversary, Bell’s adaptation of David Jones’ verse-novel In Parenthesis marks this
centenary and commemorates the terrible losses among the Royal Welch Fusiliers during the assault on Mametz Wood. Directed by David Poutney, the opera is
an act of remembrance which laments losses on all sides, and this is reflected in designer Robert Innes Hopkins’ opening image. Two poppy wreaths lay at
the foot of a front-canopy which reads: ‘To the enemy front fighters who shared our pains against whom we found ourselves by misadventure.’

Writer, painting and engraver, David Jones – who was half-English, half-Welsh – was himself a member of the Fusiliers regiment, having enlisted in January
1915. He served on the Western front from December of that year to March 1918. In Parenthesis, first published in 1937 and later described by T.S.
Eliot as ‘a work of genius’, fictionalises his experiences and depicts events in the life of a young Private, John Ball, from December 1915 to July 1916,
charting his company’s embarkation from England, the trials and horrors of the trenches, and Ball’s involvement in the ill-fated attack on Mametz Wood. 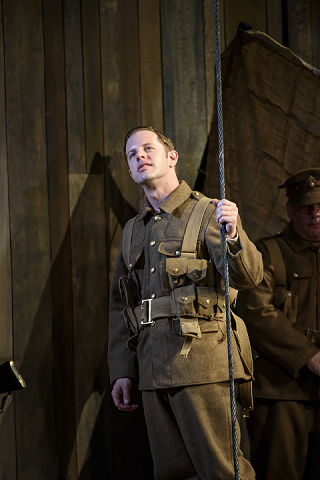 Jones’ literary epic comprises a blend of free verse and prose; able both to capture its poetry in music and relate its narrative through words, opera
seems singularly well-suited to convey the text’s shifting perspectives and often dream-like ambience. Librettists David Antrobus and Emma Jenkins have
deftly maintained Jones’s combination of the colloquial with the mythic: ‘Ball is our Orpheus descending into the Wasteland of war and emerging
miraculously alive after an ordeal that should have ended in certain death.’

Perhaps, in fact, Bell’s composition is more oratorio than drama. Jones’ text does not have a strong narrative drive but it is infused with Roman Catholic
resonances which weave around copious allusions to other literary texts, often centuries old. Antrobus and Jenkins reproduce Jones’ allusive mosaic which
mingles fragments from the ancient Welsh heroic epic Y Gododdin, the Song of Roland, Chaucer, Malory’s Morte d’Arthur, Shakespeare’s Henry V, Milton, Coleridge and Lewis Carroll with squaddies’ slang and rugby songs. In the opera, stylised rituals such as the redemptive
blessing bestowed by the Queen of the Woods and her attendant dryads sit alongside realist details such as the gleeful unpacking of a Fortnum and Mason’s
hamper, which arrives in the trenches to celebrate Commander Jenkins’ 21st birthday and his promotion to Lieutenant. In this way, the human
experience of war is seen through a double-lens of distancing myth and intimate actuality.

What the librettists add to the mix is less satisfying. Taking their cue from a later artwork by Jones, Epiphany 1941: Britannia and Germania Embracing (which is dedicated to ‘the enemy front-fighters who shared our pains against
whom we found ourselves by misadventure’), they preface the action with an Introduction during which two ‘bards’, Britannia in clerical attire (Peter
Coleman-Wright) and Germania in the formal dress of the 1910s (Alexandra Deshorties), take their places before large wooden lecterns and, joined by the
female members of the chorus, ask: ‘Do you remember the many men so beautiful who went to war?’ Their question echoes Jones text which itself recalls
Coleridge: ‘The many men, so beautiful!/ And they all dead did lie’. These bards – who seem to have strayed in from the set of Britten’s The Rape of Lucretia – wander through the action in various guises – Officer, barmaid – offering a moralising commentary. Both Coleman-Wright and
Deshorties were vocally commanding but the bards’ presence and redundant, often sanctimonious, utterings were intrusive. 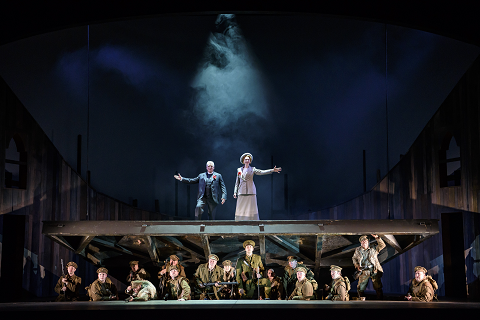 The set effectively evokes different terrains: a parade ground, a ship’s gang-plank and cabins, a claustrophobic trench, a devastated no-man’s-land and the
enemy lines. Later, when the canopy re-descends, we see the German soldiers resting aloft, their tender carol ‘Es ist ein Ros entsprungen’ carrying like a
lullaby to the English below who respond with their own song. The spirit of the moment felt familiar. I was put in mind of Kevin Puts’ Pulitzer
prize-winning Silent Night which – based upon Christophe Rossignon’s 2005 film, Joyeux NoÎl, about the WW1 Christmas truce of December
1914 – also depicts the power of music to bring about peace between warring factions, and which I saw at Wexford in 2014 ( review).

The lighting design (Malcolm Rippeth) recreates the multifarious shifts of perspective in Jones’ text – which explores not just Ball’s experience but a
collective consciousness – and the hallucinatory worlds into with the poet-dreamer Ball’s mind wanders. Through an oval aperture above the parabolic wooden
trench, we peer into a pure azure sky which darkens to indigo. An apricot dawn deepens to blood-crimson, as Ball mounts the ship’s gang-plank and he
imagines the fires of hell. As they near the front line, Ball envisions Lieutenant Jenkins as Christ, a shepherd leading his sheep through the wilderness.
Rippeth’s disorientating shifts of colour and intensity create a mood that might be termed romantic surrealism, and they are match by Bell’s score which
coheres many musical idioms.

The 36-year-old English composer’s technical precision can best be appreciated in the quieter passages (which are also more sympathetic to the voices)
where he employs chamber-like textures, the sparseness allowing individual instruments and small groupings to offer eloquent elegiac commentaries.
Britten’s The Turn of the Screw and Death in Venice came to mind. The bass-dominant orchestration foregrounds harp – tolling resoundingly
and low – and timpani, thudding and sliding, eerily and achingly. The delicacies – which reflect Jones’ prevailing tone of understatement – also make the
moments of brutality which annihilate the false peace more shocking, though they are less interesting or inventive musically.

Bell writes sensitively for the voice and the vocal lines are finely shaped and spacious. Jones’ verse is condensed and fragmented but it nevertheless has
a strong inner rhythm, particularly in the moments of mythical quasi-incantation, and Bell’s melodic idiom captures this intensity well.

The cast sing committedly and bravely, and though American tenor Andrew Bidlack, as Private John Ball, has the lion’s share of the stage-time, this
genuinely is an opera of collective voices. Ball is the epitome of Frost’s soldier-poet: he is impractical, naÔve, late for parade, but if he is hapless he
is also heroic. Bidlack began with youthful brightness and openness but found the role quite taxing.

The officers and rank-and-file soldiers are resilient of spirit and vibrant of voice. Baritone George Humphreys used his clear, ringing baritone to make
Lieutenant Jenkins an inspiring leader of men. Tenor Mark le Brocq was a dynamic Snell; in contrast, Marcus Farnsworth’s lyricism conveyed Lance-Corporal
Lewis’s whimsy and wistfulness. In Jones’ text, on the eve of battle Lewis and Ball retreat to a ‘real’ world which now seems incredible, talking of
‘ordinary things […] of the possible duration of the war. Of how they would meet and in what good places afterwards […] Of if you’d ever read the books
of Mr. Wells. Of the poetry of Rupert Brooke’. In the opera, the friends’ contemplative duet, just moments before the carnage, was a refuge of peace which
emphasised the wretched waste and futility of the ensuing slaughter: only Ball, injured in the leg, survives.

Donald Maxwell put in a superb character-performance as the archetypal Dai Greatcoat, arguing trenchantly with Graham Clark’s tetchy Marne Sergeant about their respective ancestries and delivering a boastful post-prandial claim to have fought in every human conflict since the fall of Lucifer:
his forebears fought alongside the Black Prince against the French at Crecy, while he himself was by a liege of King Arthur. 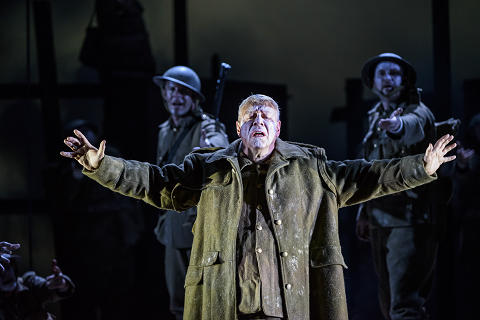 The male chorus of soldiers gave a robust rendition of the Llanelli anthem, Sospan bach, but it was the women – as the Chorus of Remembrance or
when entertaining the troops in a French bar – who excelled. But, when the devastated Mametz Wood was regenerated by the Queen of the Woods, the Chorus’s
transformation into dryadic trees, complete with twig fingers and flower-sprouting hats, was a mythic vision too far. Moreover, there was something about
this adaptation of Jones’ poem – sensitive, insightful and assuredly directed though it was – that caused me to ponder the aesthetic depiction of the
horrors of war through images which, repeated over time, may fade into familiarity.

In his Preface to In Parenthesis, Jones explains that the ten years which passed between the end of the war and his first attempts to write of his
experiences allowed him ‘to appreciate some things which, at the time of suffering, the flesh was too weak to appraise’, and gave those experiences their
literary form. In Parenthesis brackets the years 1914-18 within a historic past and as genuine happenings blend with myth, moral ugliness is
transformed into aesthetic beauty. Jones is honest and tender; there is no complicity with war, but the men themselves are ennobled by the convergence of
past and present, epic and commonplace.

In The Literature of War: Five studies in Heroic Virtue (1978) Andrew Rutherford, praises post-war novelists who have given new shape to the
experience of war: ‘honesty, inclusiveness, psychological and moral insight, and the accurate notation of experience are all desiderata in war literature,
but they are not sufficient in themselves: they must be combined with the search for an appropriate form and the struggle to articulate through this the
author’s complex vision of the truth.’

Jones found that form. Now one hundred years have passed. Is there anything more to add to the words of man described by Stephen Spender as ‘like Thoreau,
Melville and Hopkins … one of literature’s saints who speak with an authority that comes more from religion than from the world of letters’. Perhaps I am
troubled by the thought that in our desire to keep the experiences of men like Jones alive in our cultural memory, as of course we must, we are in danger
of diminishing the impact of such men’s honesty. But, perhaps it was just the coincidence of events – centenary, referendum, performance – that prompted my
reflections. Bell’s opera is well-crafted, WNO’s performance well-drilled, and both will bring Jones’ voice to a wider public.