Nothing held back, whites raped and brutalized and humiliated blacks in this witty comedy, here moved from the Bay of Naples to the African city Asmara (Mussolini’s new Rome) in Eritrea [a small state that won its independence from Italy’s former colony, Ethiopia in 1991].
Geography apart it was dimly lit comedy —hazy, sinister foreign atmospheres carefully calculated by lighting designer Dominique BruguiËre (whose most recent project in Aix was ChÈreau’s Elektra). French film set design/decorater Alban Ho Ban created Roman comedy’s cross streets for the first act — a shop front on a huge mud faÁade, probably a fort, the garrison of Italian soldiers. The final act took place inside the fort in a sort of distressed, mud colored courtyard, Italian flag limply hanging.
However the collaborator most responsible for abusing our sensibilities was conductor Louis LangrÈe whose overture to Da Ponte’s comedy resonated with the brutality on the stage (soldiers raping a black woman), not to mention the maestro’s very willing collaborators, the magnificent Freiburger Barockorchester whose antique tonalities shouted the roughness and the darkness of the stage atmospheres. 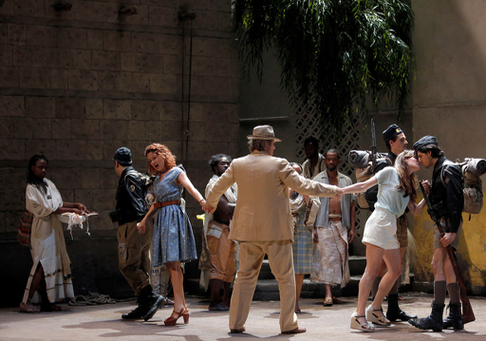 left to right Guglielmo (mostly hidden), Fiordiligi, Don Alfonso, Dorabella, Ferrando
The stage was rude and angry, two simple girls of their time and place, daughters of Italian colonists. Hardly polished examples of a master race, rather they were crude and tarnished examples of humankind’s totem of purity. Conductor LangrÈe and Kate Lindsey’s Dorabella made “Smanie implacabili” an explosion of ugly sentiment. There was no applause. Rod Gilfrey’s Don Alfonso with Lenneke Ruiten’s Fiordiligi and Dorabella moved as a menacing phalanx towards the audience in a dark and flatly sung “Soave sia il vento,” Mozart’s gentle reverie becoming an anthem to a lost humanity. There was no applause.
And it went from there, stage director Christophe HonorÈ plumbing the depths of wit, character perception and subtlety in his complex and thorough staging. Only to mention the virtual rape of a handsome noir by Fiordiligi and Dorabella in “PrenderÚ questo brunettino/Ed intanto io col biondino” and the morphing of Mozart’s more subtle racism (Turks) into blackface. The blond and brunette had become two very black African soldiers [in historical fact the occupying Italian fascist forces employed black mercenaries].
Bass [!] Nahuel di Pierro’s Guglielmo, often accompanied by two thugs (a blanc and a noir), made a tough guy match for rough and nasty Dorabella. Tenor Joel Prieto’s Ferrando who in the first act pressed his uniform on a period (‘30‘s) ironing board before marching off to the feigned war showered a vista before his second act seduction of Fiordiligi, his bronze blackened body reflecting golden light. 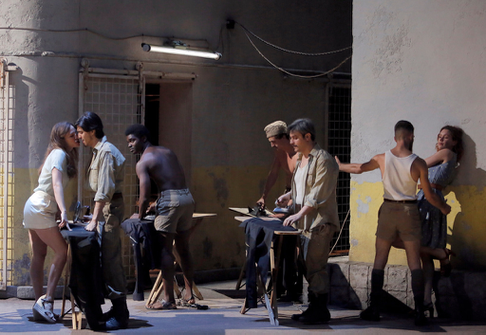 Dorabella and Ferrando (left), Guglielmo, supernumerary and Fiordiligi (right)
Above all else was conductor Louis LangrÈe plumbing the depths of Mozart’s score, finding, amplifying everything we saw on the stage, including — and most of all — the sublime moment when Fiordiligi knew she loved the black soldier, not the white one. This is when the Freiburger Barockorchester took us to a transcendental place we never knew or even suspected existed in this far-fetched, esoteric comedy.
Wow.
Making all this possible was the depth of casting, led by the omnipresence of Rod Gilfry’s Don Alfonso in a tacky white linen suit and fedora. But moreso by the chorus of Cape Town Opera, imported for the occasion, bringing with it the complexities of colonial racism in Africa and indeed racism everywhere.
As a complicit audience we allowed our sensibilities to be exploited. Overheard intermission discussion struggled to make sense of the metaphor and there was offense expressed at the in-your-face exposition of racism. Certainly all of us left the theater more than ever challenged to make sense of art and life.
Still it was Cosi fan tutte, and that means a very long evening of laying out the plot bit by bit and discovering, finally and slowly, its resolution. There were some rough moments between the pit and the stage, the Despina of Sandrine Piau not finding the sense of this music and maybe the production. We may have wished for a stronger portrayal of Fiordiligi, though Mlle. Ruiten did succeed wonderfully in accomplishing the opera’s final redemption.
Michael Milenski