One wakes to tentative summer sunshine and then remembers that the social, political, cultural and financial storm-clouds are looming – as this morning’s
newspapers, with their reports of the Bastille Day attack in Nice, remind us.

Art can never assuage reality but it can provide a momentary escape, where imagination and fantasy can, for a moment, hold sway. What better than a
fairy-tale to show us that sometimes rags really can turn to riches, coal to diamonds, and the poverina truly can become a Principessa.

Oliver Platt’s sparkling new production of La Cenerentola at Opera Holland Park is timely, then. True, Rossini does not indulge in sentiment: it’s
out with the glass slipper and in with his-and-hers bracelets. Pumpkins and fairy godmothers are usurped by beggars and philosophers. But while Rossini may
ironize tender feeling and romantic display, Platt’s new production surely seduces with its suave stagecraft and deft, but never hyperbolic, wit.

This is a production where – I’ll risk a clichÈ in relation to a work which relies on formulae, both musical and narrative – director, designers and
musical dirigent are all singing from the same hymn sheet, and the cumulative effect is as magnificent as the ‘Wicked Stepfather’s’ nomer.

Neil Irish’s designs are splendid without calling for excessive splendour. The lurid excesses of Angelina’s two sisters, Clorinda and
Tisbe, all hot-pink and poisonous-green, are contrasted with cool elegance of Prince Ramiro’s black-and-white retinue, while the courtiers’ classical
understatement is attractively alleviated by a flash of glamour in the form of their gleaming hunters’ red-coats. Don Magnifico’s mediocre apartment – the
pompous patriarch snoozes under a crumpled brown counterpane while his daughters boast in their brassy boudoirs – is counter-balanced by the glitzy
stylishness of Ramiro’s palatial ballroom. Mark Jonathan’s lighting design emphasises both the realistic emotional arguments (cool blue is superseded by
warm orange during Angelina’s first meeting with the disguised Ramiro) and the shifts between honest naturalism and fictional caprice.

Shape-shifting and transformation are the essence of fairy-tale so it’s fitting, but still impressive, when the papered panels of Don Magnifico’s
bed-chamber swivel to transport us to the luxurious majesty of Ramiro’s court. As with all marvellous magical effects, if you blink, you’ll miss it.

Platt is well aided too by Movement Director Emma Brunton whose choreography – particularly of the OHP Chorus who are in as fine a voice as when I heard
them in the opening production of this OHP season (review) – is polished.
Individuals and ensembles slide in-and-out through doors and trompe-l’oeil apertures with the slickness, but not the slapstick, of the sharpest
farce.

Platt may not delve too deeply into the opera’s incipient moral issues, but then neither does the composer. But, the director does overcome the formulaic
inevitabilities of a score which was composed by the 25-year Rossini in just three weeks and which makes considerable use of self-borrowings. Platt gives
us witty gags a plenty while never straying into hyperbole. The visual jokes are never laboured, and are frequently side-tickling and clever. The final
disillusionment of Magnifico is a gem, a set-piece of punctured pomposity. The storm episode – one of Rossini’s favourite tropes – is a tour de force as twirling brollies enact the progress, ultimately calamitous, of Ramiro’s carriage through the tempest.

Director and designers are superbly partnered by conductor Dane Lam, who exhibits an intuitive feeling for the Rossinian idiom matched by a confident baton
technique. Though Rossini and his librettist Jacopo Ferretti cannot avoid some musical and dramatic longeurs as they go through the dramma giocoso motions, Lam keeps the musical momentum swinging. The Rossinian accelerandos are perfectly geared up, the crescendos expertly
flared. The left-handed Lam’s confidence gave punch and brilliance to the score and he was well-served by his woodwind players who bubbled along with a
sensitive ear open to what was going on behind them. All the details were pin-pointed, but there was never any hint of fussiness, or bombast.

Of the cast, Jonathan Veira’s slightly down-at-heel Don Magnifico led the way. The virtuosic patter of ‘Sia qualunque delle figlie’ was precision-perfect
and Veira struck the delicate balance between oppressive bullying and vulnerable charm. He was almost equalled by Nicholas Lester’s arch, stylish Dandini;
Lester sang with lots of brio and in his Act 1 number, ‘Come un’ape ne’ giorni d’aprile’, used the text well. The only, small, concern was just how the
tall, elegant Lester and the more compact Nico Darmanin would ever have convinced their entourage during the role-swapping of master and servant.

As the eponymous scullery-maid-cum-princess, Victoria Simmonds took a little while to warm up; her identify-defining ‘Una volta c’era un re’ was gentle and
sweet but did not quite make the moral mark it should. Subsequently, Simmonds had the notes, if they didn’t always trip along as if on overdrive. But, if
her coloratura was not as finely etched as it might have been she grew in confidence when drab bandana was supplanted by diamante ball-gown – the silvery
exuberance of her gown trimmed with an ebony glint served to underscore that charcoal and gem are cut from the same seam. La Cenerentola’s showpiece aria,
with which the opera concludes, didn’t bring the house down but it was honest and enchanting. 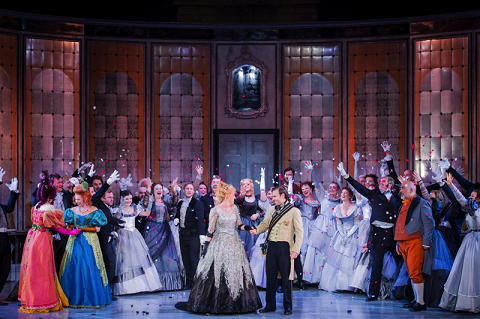 Maltese tenor Nico Darmanin had enough agility to leap up on high, but not a lot of freedom once he’d arrived; he dispatched his Act II showcase aria,
‘Si, ritrovarla io giuro’, confidently, but his is not a very ingratiating tone. Darmanin was proficient but a bit charmless for Prince Charming.

Barnaby Rea used his resonant bass well as the philosopher Alidore who serves as both tutor to Ramiro and fairy-godmother to Angelina. His one aria ‘La del
ciel nell’arcano profondo’ was competent though the intonation strayed at times.

As the ‘ugly’ sisters – who are in fact ‘beautiful’ of voice and visage, but certainly not of virtue and moral compass – soprano Fleur de Bray and
mezzo-soprano Heather Lowe were excellent as Cinders’ stepsisters, Clorinda and Tisbe respectively.

Vocally, the ensemble pieces – the Act 1 quintet and Act 2 sextet – didn’t quite hit the musical peaks, although there was some lovely sotto voce
singing in the latter to express the collective incredulity and bewilderment as Cenerentola’s real identity is revealed. But, minor caveats aside, this is
a terrific production. In unsettled times, we all need to be reassured that it’s still possible, to paraphrase the opera’s subtitle, for Virtue to triumph.
Rossini may not give us a fairy-godmother, but if your heart and hopes need a bit of a boost, this show will wave a magic wand.

This production of La Cenerentola is a co-production with Danish National Opera. It will tour in Denmark from 7 October 2016 until 3 December
2016. For more information see this link.