Music, especially avowedly political music, has associations, though, and what many, but not all, English and French listeners might understand as
solidarity following the previous night’s carnage in Nice, might sound rather different to a listener from, say, the Maghreb. Nationalism is, after all, a
big part of the problem – as London has rediscovered with a vengeance over the past few weeks. The issue of ‘national anthems’ is fraught too; ours, in the
(Dis)United Kingdom is about as divisive as it could be, eliding membership of a nation with monarchism and thus necessarily defining republicanism as a
foe within. French revolutionaries, insisting on national sovereignty, offered a not entirely dissimilar binary opposition: that, ultimately, led to the
execution of Louis XVI, who, having a veto, could not be part of the nation, which, in a time of emergency, led to one particular conclusion. It also led
to – well, we know the rest. Returning to the Royal – yes, Royal – Albert Hall, applause at the end heightened the oddness. If the opening number were a
sign of respect, however problematical – and that is how I took it, standing like everyone else – then why would one applaud? Might an aestheticised
version of the anthem, for instance that of Berlioz, not have been another option? I felt conflicted, then, but I seem to have been in a minority; many
were clearly inspired by the hope and solidarity they felt had been afforded.

Tchaikovsky’s Romeo and Juliet sounded, in this context, especially dark in its fatal opening bars. The introduction took its time, pace gathering
with a proper harmonic foundation; Sakari Oramo is far too musical a conductor to whip up artificial ‘excitement’. The Allegro sounded turbulent
indeed, counterpoint nicely Berliozian (should that not be too much of a paradox). The BBC Symphony Orchestra played the ‘Love’ theme gorgeously, without a
hint of vulgarity. On more than one occasion, the harp stole our hearts, although so, to be fair, did the BBC woodwind. Tension between programme and
material was productively explored, so to enthral and indeed to move all the more. There could certainly be no doubting the strength of the partnership
between the BBC SO and Oramo.

Sol Gabetta joined them next for the Elgar Cello Concerto, with equally fine results. In the first movement, the Moderato material proved very
much the child of the preceding Adagio, transition emotionally as well as technically seamless, whilst remaining a transition nonetheless. Much
the same might be said of the transition between first and second groups; although the mood lifted in some respects, it remained dependent (secondary, one
might say) upon what had come before. It was not all doom and gloom, by any means; Elgar’s Mendelssohnian inheritance came sparklingly to life at times.
Underlying sadness, however, remained inescapable. The background of German, even Leipzigerisch, Romanticism was also present in the scherzo; it
sometimes came into the foreground too, albeit without banishing unease entirely. Elgar’s modernity, even modernism, was as unquestionable as its roots.
(Applause and bronchial outpourings were most unwelcome at the movement’s close.) There was nothing morose about the Adagio, although it certainly
sounded deeply felt. It was, rather, passionately songful, with wonderfully hushed tones too to relish, both from Gabetta and the orchestra. Dialogue and
incitement were the generative order of the day in the final movement. Light and shade were expertly judged, likewise harmonic motion. Kinship with Elgar’s
symphonies was clear, although, by the same token, this was decidedly later music too, almost an English cousin to Ravel’s Le Tombeau de Couperin.
Ultimate weight was placed on the finale, and rightly so. Gabetta returned to the stage, following justly warm applause, to perform P?teris Vasks’s Dolcissimo, her solo vocal as well as instrumental; this was an auspicious Proms debut indeed. 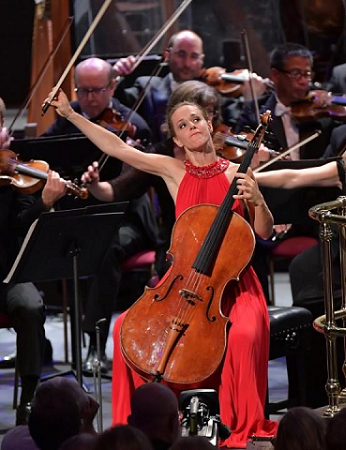 The second half was given over to Prokofiev’s Alexander Nevsky Cantata, based on the composer’s score for Eisenstein’s film of that name. Its
nationalism can hardly fail to make one uneasy too; Stalin is quoted in the Proms programme as having declared to the director, ‘Sergey Mikhailovich,
you’re a good Bolshevik after all!’ Not that Stalinism by this stage had so very much to do with Bolshevism, but anyway … Prokofiev, awkwardly for many of
us who admire him, often, although not always, seemed to flourish in such circumstances. Those who would have us believe that art is somehow removed from
politics could not be more wrong; more to the point, their protestations could not be more pernicious. However much one might want to wish away awkward
questions, such as over the Marseillaise, one cannot – and should not.

The opening orchestral number, ‘Russia under the Mongolian Yoke’, was cold yet colourful, just as it should be. The ‘Song of Alexander Nevsky’ revealed
choral forces (both the BBC Symphony Chorus and the BBC National Chorus of Wales) both weighty and clear. Prokofiev’s homophonic writing helps in the
latter respect, of course, but only helps. The ‘patriotism’ and militarism of the words – ‘Ah, how we fought, how we hacked them down!’, ‘Those who invade
Russia will meet death,’ etc. – is all the more perturbing when performed with such musical conviction as here. An impeccably post-Mussorgskian orchestral
opening announced ‘The Crusaders in Pskov’, the dissonances of course quite Prokofiev’s own, harking back to The Fiery Angel and forward to Romeo and Juliet. Even here, in ‘socialist realist’ land, there is some of the bite of the more youthful composer’s acerbity – and so there was in
performance. Echoes of Boris Godunov sounded all the more strongly as the number progressed. One could hear what must have attracted Claudio
Abbado to this music.

The following chorus, ‘Arise, Russian People’, provided a not un-Mussorgskian contrast. Motor rhythms in particular rendered the composer’s identity
unmistakeable. Glockenspiel and xylophone offered the most enjoyable of rejoicing later on. ‘The Battle on the Ice’ is the longest number in the cantata;
here it proved very much the musical and emotional heart too. Its introduction was not only atmospheric, but atmospheric in a filmic way. Oramo brought out
the glassy violas at dawn to strike a proper chill. Still more chilling was the barbarism of war proper, those motor rhythms and grinding dissonances once
again proving the engine of progress; the scherzo of the Fifth Symphony hovered not so far in the musical future, whilst Mussorgsky’s shadow was, once
again, rarely far from the aural stage. Eisenstein came to the eyes of our imagination. Olga Borodina walked onto the stage for ‘The Field of the Dead’,
seemingly as an angel of death. And yet she sounded, in her ineffably Russian fashion, a note of consolation as well as one of tragedy. This contralto-like
rendition held the hall spellbound. The final chorus, ‘Alexander’s Entry into Pskov’, struck a more difficult note. Now is not the time, to put it mildly,
for patriotic rejoicing in London, and disconcerting it sounded, even when of a ‘foreign’ variety. It was magnificently done, though, chorus, orchestra,
and conductor alike clearly relishing their musical task. Perhaps they had succeeded in putting the words to one side.