He showed that again here, and how – with a London Symphony Orchestra on outstanding form. Haitink did not seem to offer a particular point of view on the
work, but nor did he conduct with anonymity: something that could, on occasion, prove a problem in this music, during his later years, for Claudio Abbado – or at least a problem for me. Rather, one
had a sense, even though one knew it to be unfounded, even nonsensical, that this was somehow the music ‘itself’ we were hearing.

Haitink opened the first movement briskly, but the opening phrase’s subsiding both told of possibilities ahead in this movement and beyond (the
prefigurement of the fourth movement’s ‘O Mensch’ as clear, as telling, as I can recall). There was no doubt that this was a march: how could there be with
the LSO drummers on such magnificent form? But there was far more to the LSO’s performance than military might: this was Mahler with great warmth and
unanimity of attack. It was post-Wagnerian Mahler, with equal emphasis on the ‘post-’ and the ‘Wagner’. The huge orchestra notwithstanding, Mahler’s
ability to conjure up a miraculous array of chamber ensembles – always, be it noted, directed by Haitink – never ceased to amaze. When those
phantasmagorical flutes began their chorale-like passage – and, again, when it returned – Haitink held the tempo back slightly, hinting perhaps that summer
marching in might not all be good; it might even be bad, although undoubtedly irresistible, as leader Carmine Lauri’s sinuous solo suggested. The gravity
of the trombones seemed to reach back across the centuries, past Mozart’s Requiem, to ancient (relatively speaking) Habsburg equale. Tempi shifted with
infinite subtlety; this was no ‘look at me, the conductor’ Mahler, for Haitink wanted us to look at Mahler. Marching onward, the woodwind in particular
seemed almost to threaten metamorphosis into the deathly marionettes of the Sixth Symphony; equally crucial, though, that metamorphosis never happened. For
this was marching that could be enjoyed too, almost as if we were paying a decidedly non-Marschallin like visit to the Prater. But then, there came
disintegration: it was not just, or even principally shattering; it was perhaps closer to Mendelssohnian exhaustion. Attempts at rejuvenation or
resuscitation were thereby rendered all the more ambiguous. The loudest offstage percussion I can recall (up in the Gallery, I think) heralded the
recapitulation: it was as before, yet utterly transformed. And how the differences in the material were now revealed – or, so it seemed, revealed
themselves! The end, when it came, was not lingered over; whatever Haitink may be, he is no sentimentalist. There was, indeed, a touch of Haydn to it. 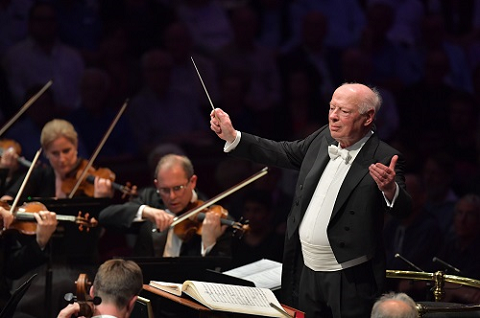 A graceful oboe solo (Oliver Stankiewicz) and gracious second violins’ response set the tone for the second movement. Except soon it became clear that it
had not; it was not long before unease set in, from within the music, nothing appliquÈ. Indeed, there was as much unease in ‘beauty’, whatever
that might be, as in dissonant corrosion thereof. Thematic profusion seemed almost to rival Mozart – and this music is perhaps still more difficult to hold
together. (So many conductors, often praised to the rafters, fail here.) Haitink’s rubato was expertly judged: again there was nothing self-regarding to
it, but rather it always made a musical point; so did his ritenuti. He revealed to us all manner of connections, intra- and extra-musical, whether
intentionally or otherwise. Not the least of them was the sweetness, inviting yet not without malignance, of Alt-Wien, that malignance ever more present
towards the close.

We heard, almost stepped into, a city dweller’s countryside in the third movement: its nightmares as well as its dreams. This was, it seemed, Mahler
exploring the terrain of H‰nsel und Gretel, only with more overt nastiness. Internal coherence was just as striking: at times, we seemed close to
Webern’s Bach. Until, that is, we could not be more distant from it. Cross-rhythms were as disconcerting as those of Brahms, whatever the gulf that might
otherwise separate the two composers (in both of whose music Haitink has long excelled). The trumpet’s presentiments of the posthorn solos have never
registered so strikingly to me. And how wondrous that sounded, from afar, in Nicholas Betts’s flugelhorn rendition. Again, there was more than a
hint of modernist Mendelssohn. Above all, though, it moved: with dignity, with nobility, rather than pleading for us, Bernstein-like, to shed tears.
Instrumental scurrying also had something of A Midsummer Night’s Dream to it: Mendelssohn and Shakespeare. With that ‘Nocturne’ in mind,
it seemed especially fitting that the French horns as well as the posthorn should have us hold our collective breath once again. We flitted around a weird
liminal zone, combining Webern and Mendelssohn; on reflection, is that not often what Mahler is? A hint of balletic Tchaikovsky was swiftly banished by
parodic ‘triumph’. And then, everything, or so it seemed, was to be heard that had gone before: together and eternally separate, alienated.

Sarah Connolly brought equal sincerity and subtlety to her vocal part in ‘O Mensch!’ Indeed the different colourings of the first statement of those words
and her repetition of them spoke volumes; likewise the ensuing ‘Gib acht!’ The orchestral backdrop, if one can call it that, sounded again close to Webern
in its shifting colours. Haitink’s strength of symphonic purpose was, however, quite different in nature (which is not, of course, to imply that Webern has
not strength of purpose!) I have heard more contralto-like performances, but there was no denying the excellence of Connolly’s blend of Wort and Ton, nor the strength of the emotional response provoked. Indeed, perhaps not coincidentally, given her recent performances of the role, there was
something Brang‰ne-like to her warnings, the deepness of Nietzschean midnight already in danger of disruption. 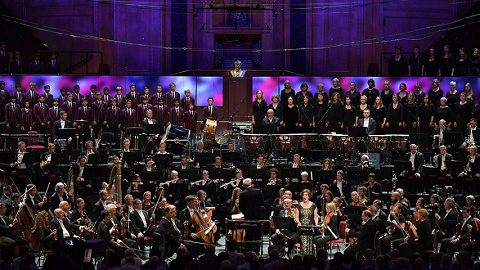 The boys’ calls of ‘Bimm bamm’ – I have heard dull people decry this wondrous moment as ‘silly’, when nothing could stand further from the truth -came as a
fifth-movement, quite heavenly wake-up call from such Tristan-esque reverie. Connolly, intriguingly, continued to warn; it was certainly not only
Haitink who understood how the two movements are connected. The women’s chorus and the LSO stood somewhere in between: mediators, perhaps even sainted
mediators.

Quiet, infinite warmth marked the hymnal intensity of the LSO strings at the opening of the finale. I thought of – and felt – Communion. ‘What God tells
me’, indeed! There was an almost Nono-like imperative to listen, as the strings spoke to us not just corporately, not just sectionally (what viola
playing!) but, so one fancied, from individual desks and individual positions at those desks too. Fragility and strength were partners as the movement
gathered pace, as something or Something revealed itself or Itself. There was, moreover, a well-nigh Beethovenian benevolence of spirit, albeit more
vulnerable, to be experienced, perhaps even a little neurosis aufgehoben. And how Haitink guided the unfolding of that long line of unendliche Melodie; how he and his players communicated that echt-Romantic Innigkeit, so close to Schumann and yet alienated
from him as modernity must be! For there was a Lied-like simplicity to what we heard and felt. This is difficult music, but its difficulty is
accessible to anyone with a heart – and a mind. Unlike, alas, the idiot who disrupted the silence-that-never-was by shouting ‘Yeahhhhhhhhh!’ How can people
be quite so inconsiderate? Still, that was an irritation rather than a catastrophe; the performance, both then and in recollection, rose far, far above it.