Berlioz’s RomÈo et Juliette was inspired by the ‘supreme drama’ of the composer’s life when, in 1827, he first saw the actress Harriet Smithson
performing with Charles Kemble’s theatrical troupe in Paris. The score is suffused with passion and tenderness: for Smithson, who five years later would
become his wife; for the playwright, whose ‘poetic thread whose golden tracery enfolds his marvellous ideas’ left Berlioz stunned, penetrated by
‘Shakespearean fire’; and for Juliet, Ophelia and Desdemona whose tragic pathos became inextricably fused with his love for Smithson – leading Berlioz to
write to a friend in 1833, in anticipation of seeing Smithson again, ‘I am mad, dearest I am dead! Sweetest Juliet! my life, my soul, my heart, all, all,
’tis the heaven, oh!!!!!! … parle donc, mon orchestre’.

Gardiner, who recorded the work with these ensembles in 1998, summoned a performance from his large forces which was similarly flushed with
sensitivity and care, supported by the conductor’s encyclopaedic familiarity with the score’s richly variegated details. He made sure that we recognised
just how remarkable Berlioz’s independence and invention truly are, and he gave us some novelties too, reinstating the second Prologue, after the Queen Mab
Scherzo and before the Capulets’ Convoi funËbre upon the discovery of Juliet’s death, which itself included inserted material setting the Requiem
mass.

For those who are still inclined to associate Berlioz, that most misunderstood of composers, with massive musical tempests, dissonant disturbances, and
platoons of brass and percussion, this performance will have been a revelation. Not for nothing did his Treatise on Orchestration establish his
reputation as a master of instrumentation and the founder of the modern orchestra. We had a full battery here including five trombones, four bassoons,
ophicleide and enough percussion instruments to keep six players busy. But, while he made the most of the dramatic climaxes, subtlety was Gardiner’s
watchword. He showed that the work is ‘monumental’ not because of the sheer size of sound conjured, but because of the meticulousness of the way the
kaleidoscopic ‘narrative’ details are married with formal necessities in a work where volume is superseded by sonority.

In his preface to the score, Berlioz made it clear that he viewed the work as ‘a symphony, and not a concert opera’, believing that Romeo’s meditation, the
Capulets’ ball the ScËne d’amour could be better depicted without the limiting specificity of words. Of the three solo voices, only the bass – who takes
the role of Friar Lawrence in the Finale – embodies an individual character, and it is the ‘symphonic’ music which bears the burden of expression and
dramatic development. 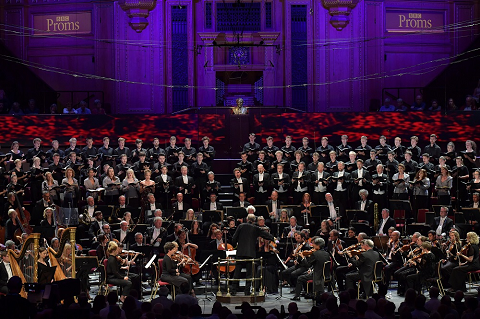 The Orchestre RÈvolutionnaire et Romantique gave us a stirring performance and a wide expressive palette. The brass had a dark coloration which was perfect
for establishing the stature of the tragedy at the start and the full, homophonic chords of the trombones, horns and ophicleide were menacing in depicting
the hot anger of the Prince who subdues the muttering of the rowdy rabble-rousers in Verona’s streets. There was scrupulous attention to the strings’
timbre and articulation with only light vibrato employed; in particular, Gardiner repeatedly quelled the sound to the barest whisper, the bows barely
brushing the string but the large complement of players ensuring that the merest breaths of sound had softness and fullness. Cello and double bass
pizzicatos were by turn astonishing agile – there must have been some sore right fore-fingers as Berlioz puts the players through their paces – and
beguilingly harp-like. String tremolos shivered, shimmered and glimmered. Spiccatos were as light as butterflies’ wings, and the muted saltato
bows combined with chattering woodwind, harp harmonics and the ting of antique cymbals in the Queen Mab scherzo to magical effect.

There were a few slips, mind. Gardiner set off at a recklessly frenetic pace, and while the period-instruments’ tone added an authentic touch of
roughness to the patrician rioting, it was a bit too fast and furious, even disordered, and we weren’t able to enjoy the full originality of Berlioz’s
rhythmic conversations in the Allegro fugato.

Gardiner did not always judge the acoustic effectively either. Yes, Berlioz does distinguish between p, pp and ppp – but
surely he did want us to hear the notes he’d written? At times the diminuendos drew the delicacies into niente, and I doubt those seated in the
furthest reaches of the Hall, and standing in the Gallery, could hear some of the most fragile details, including the cheeky chimes of the antique symbols
which close Queen Mab – which is a pity as the percussion player had walked to the front of the stage to deliver them.

Another aspect of the performance that gave me pause for thought was the ‘choreography’. The stage began bare of singers and the Monteverdi Choir
semi-chorus walked onto the stage during Part 1 to deliver their expressive narration – sung with meditative beauty and exemplary French phrasing, and
accompanied by harp, cor anglais and obbligato cello – to set the dramatic scene. Placed in front of Gardiner, at the very front of the stage (middle
to left) they were conducted by an unnamed conductor who was standing in the Arena. (I’ve subsequently learned that this was Dinis Sousa.) This seemed unnecessarily fussy (the conductor was kept busy, racing up
to the Gallery for the off-stage chorus of Young Capulets) and became more irritating when the semi-chorus then walked off stage during the Prince’s stern
intervention, distracting us from the tragic overtones of the brass’s disapproving dismissal of the bickering citizens.

The sense of disruption was unfortunately made worse by noisy late-comers at the opening of Part 2: with so much shuffling, seat-banging and fidgeting,
Romeo seemed far from ‘alone’ as the strings descended through the chromatic, ppp, sinuous line which embodies the young lover’s melancholy
solitude – and Gardiner’s determination that the strings should diminish to the point of vanishing didn’t help. Later, during the funeral cortege, the
National Youth Choir of Scotland literally brought the sombre procession to life, walking onto the raked choir-seating – in perfectly rehearsed formation
but with less than silent footsteps – just as the accumulating textures and harmonies in the orchestra developed their fugal lament.

But, these were minor blots in a performance that on the whole cohered impressively, aided by some fine singing from three French soloists. Mezzo-soprano
Julie Boulianne brought star-quality to her Act 1 narration with the semi-chorus: her rich voice had real presence and weight in the Hall, even in the most
intimate and understated melodic gestures, and the long vocal lines unwound compellingly.

Jean-Paul FouchÈcourt (who performed on the 1998 recording) used his agile high tenor and strong colour to good effect in the Part 1 Scherzetto in
which the tenor mocks Romeo’s love. Bass-baritone Laurent Naouri presented the heartfelt, honourable pleas of Friar Laurence in beautifully elegant French
declamation and found a nobility of line that gave moral stature to the recitative in which he unveils the truth. He was a little lacking in weight,
however, and at times was almost overwhelmed by the angry choral condemnations of the duplicitous cleric. The young voices of the NYCS were vibrant if
rather polite, but the strength of the choral finale – the women’s voices eventually joining those of the men, added a sort of beneficent glow – gave
conviction to Berlioz’s apparent intent that at the final reckoning reconciliation triumphs over tragedy.

In its communication of Berlioz’s intense individualism and subjectivity, and obsessive feeling, this performance was truly Romantic.