I am not sure there is any opera that has less action or has less at stake than this infrequently staged opus. Two suitors argue (and that is really too strong a word) their case to a Countess, positing which is more important in opera, the music or the words. And there is the plot. Yes, all of it. The Countess must choose, and in so doing, favor one man over the other.

In a wonderfully varied Santa Fe Opera 60th Anniversary season that had young lovers committing suicide, bandits almost being hanged, a jilted young woman resigning to numbing isolation, and an immoral wastrel being dragged to hell, by contrast this Strauss is hardly riveting stuff. Luckily, Santa Fe selected an incomparable cast and lavished Capriccio with a dazzling production, lovingly led by a commanding new (to me) conductor. 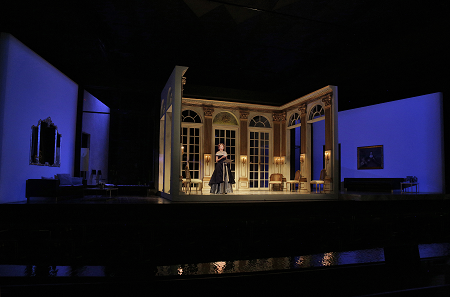 Amanda Majeski seems pre-destined to play the Countess. Her cool, secure, limpid soprano is just what Strauss had in mind when he endowed the role with lovely conversational passages, airy flights above the staff, and haunting musings on the philosophies of art and music. Ms. Majeski’s pure tone and knowing, fluid delivery harkens back to great Strauss interpreters of the last century, a direct connection to (or at least recollection of) a revered roster of interpreters.

Her traversal of the Countess’s last great monologue was a thing of great beauty, infinite variety, and sublime vocalization. Moreover, Amanda has a regal and poised presence, her carriage leaving no doubt that she is “royalty.” Her achievement is such that she may just be unequalled in this part at the moment (pace, RenÈe-sayers).

The charming, natty Ben Bliss was a most convincing Flamand. Lanky and handsome, sweet of voice and behavior, his assured tenor was just the right fit for the demands of the role. His warm, effortless singing and his charismatic presence proved a wholly winning combination. As Olivier, dapper Joshua Hopkins was a scrappy bulldog of a rival, barking counter arguments in a petulant, resonant baritone. Mr. Hopkins has shown before that he is not only a consistently secure vocalist, but also an imaginative actor. 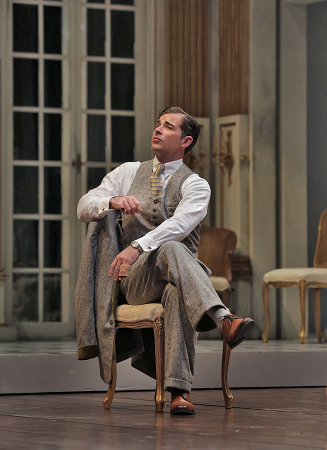 Rising baritone Craig Verm keeps going from strength to strength. Having turned in a fine performance as Sonora in Fanciulla, Mr, Verm impressed even more as the rather changeable, effete Count. His easily produced, suave delivery served the role with distinction. David Govertsen found sardonic delight in the role of La Roche, and his direct approach and easy cynicism were served by well-controlled vocalism.

It was deluxe casting to have superstar Susan Graham in the lesser role of Clairon, and she embraced the assignment with relish. Ms. Graham sang with her usual aplomb, and her world-class mezzo discovered every rich gradation of this starry featured role. Adrian Smith brought a resigned gravity in the Major-Domo, Allan Glassman was a rambunctious Monsieur Taupe, and Galeano Salas and Shelly Jackson made notable contributions as the Italian Singers. 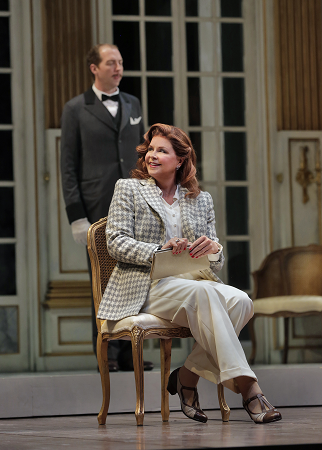 Tobias Hoheisel has designed both scenery and costumes for Capriccio, and I cannot imagine a more resplendent realization. Such is his achievement that the real existential question of the night might be: Which are more beautiful? The costumes? Or the sets? The Countess’s beautiful mid-20th Century home is all elegant windows open to the Sangre de Cristo mountains, with the furniture and other appointments an apt study in refinement and affluence. The side compartments antechambers and playing spaces off the living room are evocative of many a European villa I have seen.

Mr. Hoheisel’s period (1940’s?) costumes are breathtaking in their luxurious specificity. Any actor that gets such consummate costume assistance in communicating a character is fortunate, indeed. Malcolm Rippeth’s lighting design has bathed all this noblesse in a beautifully tinged wash of warmth that slowly morphs from daytime into a moodier look as the arguments sharpen and introspections deepen. 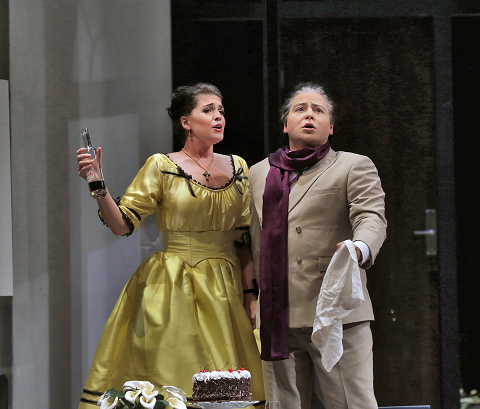 Tim Albery has directed with unfussy precision, allowing the confrontations to unfold gently and tellingly. His genius has been in allowing his consummately gifted cast to naturally make a case for this gentle opus. Mr. Albery never ‘got nervous’ and tried to gild the lily by inventing extraneous distractions. Everything he did was honestly in service to the score and the text. That said, I thought the extended on-stage prelude might have benefitted from a little more movement, sooner furthering a subtext of relationships. But all in all, this was a beautifully restrained, stylistically informed interpretation.

Conductor Leo Hussain was a revelation in the pit, helming a delicate, fluid, mesmerizing, echt account of a graceful score that is more succulent caviar than substantial Hauptspeise. From the churning string ensemble of the prelude to the confrontational dialogue at the score’s core, to the rhapsodic meditation of the closing quarter of the opera, Maestro Hussain led a propulsive, informed, precise reading that fell gratefully on the ear.

Santa Fe has a long and happy relationship with the operas of Richard Strauss. On this occasion of the 60th anniversary season, it is a pleasure to report that partnership is not only alive and well, but is still resulting in definitive interpretations.