This handsome set design was crafted by Ashley Martin-Davis, and once we accepted this repurposing of the well-known story, it became quite striking how many parallels could be drawn. Our civil strife after all pitted “family against family,” and the metaphor had considerable resonance. The “battles” between the opposing forces played out with dramatic truth, and the irrational, unavoidable love between two youngsters from opposing sides was heightened by framing it in this fresh context.

Director Stephen Lawless mined great dramatic potential in collaboration with this prodigiously gifted scenic artist, who also contributed a remarkably fine costume design. The austere unit structure included a high staircase stage right that easily suggests Juliette’s balcony. In the first choral scene, a trap reveals a plinth, rising to stage level with the lovers’ coffins. This effect returns in the final tomb scene, lifting ‘dead’ Juliette from the floor where she had collapsed, to seamlessly create her funeral bier. Meaningfully, the lovers’ nuptial bed had also risen into view from the same trap.

Ms. Martin-Davis suggested other scenes with the simple addition of such things as the altar railings, a profusion of vases with white wedding flowers (that get repositioned around the dead Juliette), a statue of Cupid that informs the balcony scene, and a military field hospital. A goodly number of hidden doors are imbedded in the imposing walls, and the basic structure can adapt to have whole segments swing into new positions, redefining the space. Completing the stellar design team, Mimi Jordan Sherin contributed a diverse and brooding lighting design, characterized by unusually effective use of stark, shadowy cross-lighting.

Back to the ravishing costumes, Ms. Martin-Davis created some unforgettable moments. The chorus women initially appeared in handsome black mourning gowns for the opening dirge, then the women stripped off those outer garments in a trice to reveal alluring white versions of those same costumes as Gounod transitions to the party scene. The richly detailed uniforms of the soldiers were not the Blue and the Grey, but rather the Blue and the Red, which made for a more vibrant visual.

Director Lawless has created memorable stage pictures and effective interaction between the protagonists that furthers the story and engages the spectators. The overall scope of the well-motivated movement is first rate. A major plus is the lively, well-coordinated fight choreography by Rick Sordelet and Christian Kelly-Sordelet. A caveat: When two characters have been ‘killed’ after a strenuous, active duel, please do not have Tybalt and Mercutio ‘die’ on their backs, revealing their uncontrollably heaving bellies as they gasp to regain their breath!

Nicola Bowie contributed appropriate choreography with some simple and effective court dances. I have never seen the actual ballet included, and the two ballerinas Beth Miller and Susan Vishmid were poised and skilled. However, if the extraneous dances are to be added, I wish they might have engendered more dramatic character and elan, lest they merely serve to lengthen a long evening.

Ailyn PÈrez proved a delectable Juliette. Making her entrance down the upstage stairs like a gangly schoolgirl walking in heels for the first time (as she faltered Gertrude gave her a hand), she was believably youthful, and radiantly pretty. As love’s complications progressed, Ms. PÈrez suggested a moving and honest maturation. Her soprano is one of the glories of the current crop of operatic talent, and once past a slightly bumpy Je veux vivre, her rich, responsive singing found all its usual sheen and nuance. The poison aria was characterized by an inexorable build to a searing climax, and proved the evening’s musical highpoint. 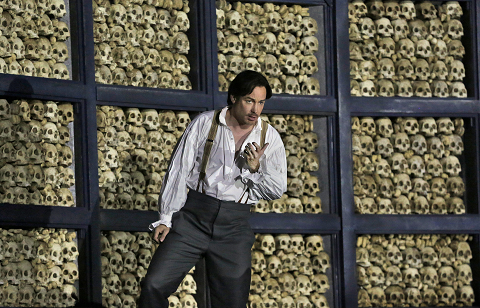 Stephen Costello was a fine match as a mooning, boyishly appealing RomÈo, although he seemed somewhat distracted at the start, as if wishing to be somewhere else. He soon enough warmed to his task as the first encounter with Juliette developed more ease and urgency. Mr. Costello’s appealing tenor is well-focused, dramatically exciting, and thrillingly stentorian. Maybe sometimes “too.” While a handful of the very highest notes displayed more tenacity than gleam, it would be hard to wish for a more authoritative reading of Gound’s hero. And bravo to Stephen for brazening it out when, after an ear-splitting thunderclap and blinding flash of lightning from Mother Nature, he managed to convincingly say how the tomb was “so dark and silent!”

These two accomplished titular singers are conscientiously going through all the right motions, striking all the right poses, stroking, smooching, snuggling, and more. They are visually perfect and vocally splendid. But at the end of the day, at the risk of seeming ungrateful, I wonder if even more real dramatic heat and musical sparks might have been generated?

Deborah Nansteel has such a plummy, ingratiating mezzo that she made an exceptionally striking presence as Gertrude, the finest of my experience. Ramond Aceto’s solid FrÈre Laurent not only heals heartsick souls, but does double duty patching wounded bodies as head surgeon in a military hospital. Mr. Aceto has a firmly grounded bass-baritone that moved us with its bold, luminous tone and concentrated dramatic purpose. Mezzo Emily Fons was a thoroughly adorable StÈphano, and her agile, distinctive way with Que fais-tu, blanche tourterelle was enchanting.

Elliot Madore has lost some of the incisive, youthful gleam in his attractive baritone, but the tradeoff is that he now effects a more swaggering, if more diffuse vocal presence. His energetic acting, strapping physique, and aggressive singing serve Mercutio well, although his impersonation is marred by a ‘bit’ of mugging. His Queen Mab aria was a personal best, with good variety and control.

Cooper Nolan strikes all the right poses and hits all the right notes as a scrappy Tybalt, and his fresh, flexible tenor shows good promise, even though is sometimes a mite covered. Tim Mix displayed a fine legato and beguiling tone as a capable Daddy Capulet, even while his instrument and demeanor are at the moment too youthful for the paterfamilias. It is impossible not to love Soloman Howard, blessed as he is with an ingratiating stage presence and a gorgeous, mellifluous bass-baritone. Mr. Howard commanded attention and admiration as the imposing Duke. 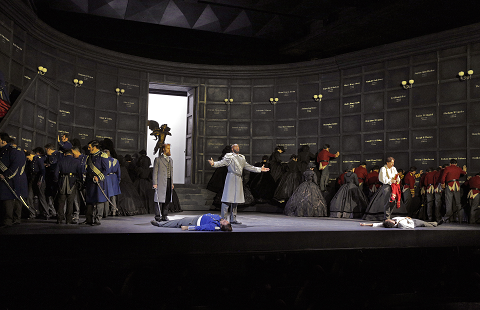 Music Director Harry Bickett infused the performance with just the right Gallic style, and he elicited emotion-infused playing from an orchestra that celebrated a full palette of color and effects. Ensembles, especially those involving Susanne Sheston’s fine chorus, were beautifully rendered. And Maestro Bickett’s partnership with the soloists was seamless and accommodating. If I had one musical wish, perhaps internal cues might be picked up. After more than one set piece, the pause was just long enough to prompt nervous, unneeded applause just as the next downbeat started. This gave an unnecessary stop and start feel to an otherwise commendable and forward thinking theatrical experience.