Andrea ChÈnier is a masterpiece of many styles — of verismo, the micro-second before emotion explodes; of melodramma, the moment emotion is expressible only by singing; of post-Romanticism where emotional colors overwhelm all dramatic impetus. Its libretto is a triumph of latent lyricism that dissolves into a musical magic that possesses your mind, body and soul.
And it all happened on the War Memorial stage. Well almost.
The eight-year so far tenure of San Francisco Opera music director Nicola Luisotti has imposed a resplendent warmth and suppleness to this superb orchestra, attributes that responded most comfortably to the ample tempos the maestro imposed onto Giordano’s opera, tempos that fused easily and naturally with the musical impulses of the singers.
It was this sometimes problematic maestro at his finest, his hyper-Italianate musicality flowing unabashedly and unstoppably for the two hour, too brief duration of this magnificent opera. 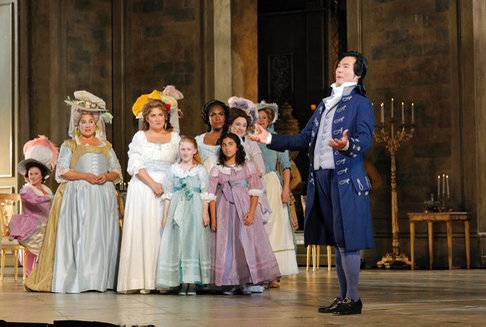 Second from left Anna Pirozzi as Maddelena, third from left J’Nai Bridges as Bersi, choristers and supers, Yonghoon Lee as ChÈnier
Andrea ChÈnier is a tenor showpiece, and actually little more than that, four gigantic arias that are an exposÈ of voice and style and pose. It was once whispered in War Memorial corridors that tenorissimo Roberto Alagna would be our ChËnier, but even his splendid swagger could not compensate for the uncomfortable phrasing of his 2013 concert attempt at the role (Opera Orchestra of New York). Tenorissimo Jonas Kaufman was the original ChÈnier of this Covent Garden production brought now to San Francisco, but this oh-so-famous tenor does not find his way to the operatic provinces.
And all the better because San Francisco Opera fielded South Korean tenor Yonghoon Lee as the doomed poet Andreas ChÈnier. If lacking the ethnicity of the Italian tenor, Mr. Lee’s distilled mastery of the style was exquisite. The vocal gestures were elegant moreso than mannered, the posing more for vocal and musical necessity than tenorial vanity. Mr. Lee’s performance satisfied on every level, he proved himself a connoisseur’s tenor. 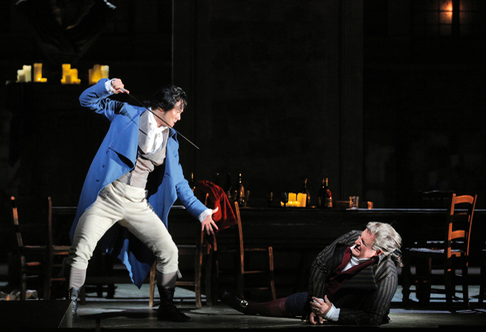 Yonghoon Lee as ChÈnier, George Gagnidze as GÈrard
Blue chip casting continued with the GÈrard of Georgian baritone George Gagnidze. Famed as a Rigoletto (L.A. and Aix-en-Provence in my experience), Gagnidze finds the deep humanity of this footman infatuated both by the poetry of the revolution and by the beautiful daughter of the soon-to-be annihilated aristocratic family he serves. Beautifully sung and sensitively acted he upheld the artistically aristocratic tenor of the performance.
Outstanding among the fine cast were the charming Bersi of J’Nai Bridges, the confident Roucher (ChÈnier’s friend) by David Pershall, and the gruff and rough Mathieu (the sans culotte), not to overlook Joel Sorensen’s sly Incroyable. The cameo of the blind Madelon offering her grandson to the revolution was satisfyingly delivered by Jill Grove. Finally much appreciation must be extended to the San Francisco Opera Chorus for the splendid execution of its sizable role in the opera,
Problematic were the performances of Catherine Cook as the Countess of Coigny who made the role broad caricature, a tone that clashed with the overall mood of the opera. The role of Maddalena (daughter of the Countess in love with ChÈnier) was taken by Italian soprano Anna Pirozzi who sang the notes adequately without evoking either musical or dramatic character. Much reference was made to her golden hair though her wig read as mousy brown (from my seat in Row 16).
The production was by British director David McVicar who stages most everything of size and importance at San Francisco Opera (and the Met and Covent Garden and elsewhere). His productions are well researched, beautifully designed, skillfully executed and always very big (but not too). And entirely generic.
The scenery for this Andrea Chenier was designed by Robert Jones, well known to the world’s major operatic venues. The solid constructions were rich in period detail, creating the very specific environment of late 18th century France. The costumes designed by Jenny Tiramani were rich in period detail, though the white dresses worn by Maddelena and Bersi in the first act (1789 eve-of-Revolution) seemed a bit similar to the white dresses of the merveilleuses (fashionable women who survived the Reign of Terror) of the second act (1794). Hear/tell the costumes were also constructed in period technique (no zippers, only hooks) if not, hopefully, in actual Lyonnaise silk.
As a David McVicar production is haute gamme so was the lighting, a virtuoso accomplishment of lighting designer Adam Silverman who struggled nonetheless to create a sense of mood. The play of lights and shadows remained, like the McVicar production, an exercise in theater technique rather than a dramatic and musical discovery of Giordano’s magnificent opera.
Michael Milenski