Now
it feels like a ghost town. Still, a strange place for this staging of
rarities: Carter’s What’s Next? and Bernstein’s
Trouble in Tahiti.

Two completely different operas that complimented each other through their
extremes. Oper am Rhein offered two new directors their yearly “Young
Directors” platform, giving new talent the possibility to shine. It was a
delight to hear them well sung, conducted, and inventively staged by two new
young talents Tibor Torell and Philipp Westerbarkei.

Since Germany was playing Italy that evening (they won), the auditorium was
empty save for some youthful enthusiasts, an American delegation of American
conductors, and a scattering of curious elderly couples. It strangely created
an intimate chamber opera like setting that suited the one-Act operas. 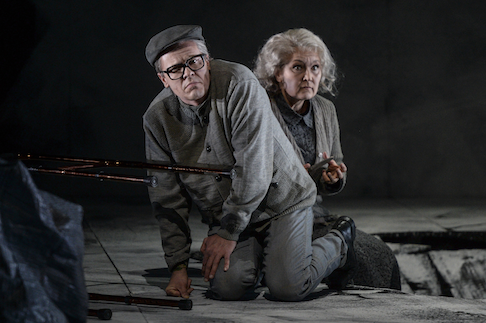 Scene from What’s Next?

His only opera, Carter’s What’s Next? premiered in 1999
under Daniel Barenboim, when the composer was still alive. In this short,
unsettling, metaphysical work, a bunch of people lose their memory after a car
crash. They then appear as infants, adults, and elderly on stage. The singers
have fallen through a hole in the road. They need to find a way to move on.
Starry space video added a timeless dimension to Torell’s staging. With
very little, he managed to create a lot of ambience.

In what amounts to atonal acrobatics, the singers had to manoeuver their
voices through Carter’s shrill and pointy score. Highly complex, the
performers seemed to crash into each other vocally. Singing without being heard
and understood. As with most of Carter’s otherworldly creations, at a
certain moment you become entranced by his cosmos of twinkling dissonance. With
it unnerving overtones, this concise composition had uprooting neurotic
effects.

Leading the Duisburger Philharmoniker (DP), Jesse Wong kept strict tempi,
sustaining a highly charged suspense up to the intense climax. His focus was
impressive and necessary with the challenging, cacophonous sounding, score.
Percussion served up many disruptive, energetic surges. Later they added their
strange effects from stage with stereophonic effects. Wong, a conductor at the
beginning of his career, impressed technically–especially considering
Barenboim premiered the piece with his Berliner Staatskapelle. The young
audience applauded with boisterous Bravos.

The sad story notwithstanding, Bernstein’s Trouble in Tahiti
sounded like the most joyous music after Carter’s universe. Bernstein
wrote the score and libretto–perhaps inspired by his parents’ unhappy
marriage. Set in the Fifties the drama has marriage themes similar to Mad
Men. Westerbarkei kept Bernstein’s time and place. His staging was
timely stylish and complimented Bernstein’s music. Nothing too
outrageous, just elegant in its simplicity.

Three kitchens divided by elevating walls on a reduced proscenium make up
the set. The middle is the shared family kitchen. In the left kitchen, the wife
sees the shrink; the right, the husband has an affair with the secretary. The
son plays baseball, at which the father used to be the best. The unhappy
marriage is in crisis, as they stick to social conventions. The director
establishes an impressive illusion of happiness with vibrantly colourful
lighting in the social settings. When the singers are alone, the set remains
grim and grey.

Bernstein’s work is not a happy piece, but he still keep his momentum
fast-paced. He uses the theatrical aspect of the marriage to include upbeat
boisterous music. Full of swinging passages, compared to the discontinuity in
the eerie dissonances of Carter, this opera flies by. Conducting the DP,
Patrick Francis Chestnut brought out the pulse and rich colours of
Bernstein’s score with its jazzy syncopations and rhythmic currents. The
early stages of the composer’s mature style from On the Town, West
Side Story, could be detected. Ramona Zaharia (Dinah the wife) and Thomas
Laske (Sam the husband) convinced with their accentless singing of this America
music.

With the interesting risks Oper am Rhein takes with young artists, and both
these productions looking and sounding exceedingly sharp, I wouldn’t mind
traveling back to Duisburg for another rarity.