This was a four-hour feast for bel canto devotees. Sir Mark Elder’s absolute belief in the work was tangible, and thrilling, from the first
down-beat, and his unflagging vitality lifted the Opera Rara Chorus, the Orchestra of the Age of Enlightenment and the illustrious team of soloists to
sustain an incredible musical and dramatic intensity.

Semiramide, the Queen of Babylon, has inspired almost four centuries of plays and operas: her infamous sins rival those of Clytemnestra, Oedipus and
Shakespeare’s Gertrude combined. She has murdered her husband Nino and, apparently, her son, with the aid of her lover, Assur. But, having ruled Assyria
she is now forced to name an heir. Semiramide chooses the dazzling solider Arsace, and claims him as her husband. And, this is where things get a bit
sticky: Arsace is in fact her lost son, and in any case he’s infatuated with the Princess Azema. The vengeful ghost of Nino – worthy of Macbeth or Hamlet – appears, and demands the slaying of the Queen in retribution for his murder. His wish is fulfilled but the unwitting matricide is more
accidental than intentional and the opera ends, not on a triumphant note but with questions of redemption to the fore.

Premiered in 1823, Rossini’s opera took Voltaire’s play SÈmiramis as its direct source. Voltaire had focused less on the Oedipal attraction
between mother and son, and more on themes of betrayal and murder. A concert staging of the opera was perfectly apt. For nothing much happens in the course
of Gaetano Rossi’s libretto: the assassination of the King happened years ago and now we are simply waiting for the gods to bring justice to bear on the
perpetrators, while the protagonists keep us entertained with a series of elaborate arias about love – passionate, unrequited, familial and unwittingly
Oedipal. But, Rossini gives us a cornucopia of wonderful melodies, with infinitely varied instrumental colourings, and vocal elaborations which are so
beautiful they can win our sympathy for those guilty of the most abhorrent crimes.

There were some changes to the originally announced cast, but this did not affect the female roles – and this was definitely a ‘ladies’ night’. In the
title role, created for Rossini’s wife Isabella Colbran, soprano Albina Shagimuratova revealed a huge registral and dynamic range – she has a
breathtakingly controlled pianissimo; her combination of stage presence, vocal pyrotechnics and expressive abandon made Rossini’s fluent lyricism
electrifying. She was utterly in command of both coloratura and style. As her Act 1 showpiece, ‘Bel raggio lusinghier’, confirmed, Shagimuratova has both
an affecting chest voice and the dazzling high-lights. Her virtuosity served the drama and was always stylistically attuned. 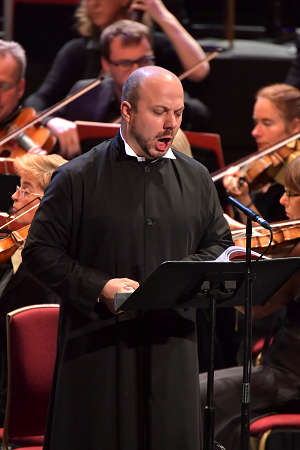 She was partnered by Daniela Barcellona who, as a sincere and dramatically credible Arsace, demonstrated musical and dramatic acuity: indeed, it was as the
musical demands increased that Barcellona seemed to communicate more directly and profoundly. The roulades of ‘Ah! Quel giorno ognor rammento’ presented no
difficulty; but, more than vocal agility it was Barcellona’s tonal depth and range which was so impressive. When she joined Shagimuratova in duets such as
Act 1’s ‘Alle pi˘ care immagini’ the results were stunning. 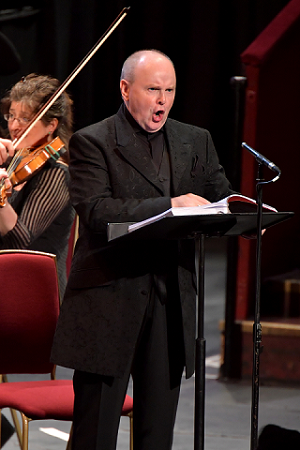 Ildebrando D’Arcangelo had been scheduled to sing the role of the unwitting mother-murderer Assur but his replacement, Mirco Palazzi, was no ‘second best’:
that said, Palazzi’s lack of a strong, warm bass range was a slight weakness – especially in his ‘mad aria’ – but one that he more than made up for with
nimbleness and vitality of tone. Barry Banks – replacing Levy Strauss Segkapane in the dramatically rather thankless role of the advisor, Idreno –
despatched his high notes with fluency and ease, and displayed a lovely, appealing tone in his Act 2 aria, ‘La speranza pi˘ soave’, (though his role was
truncated, despite Elder’s professed ‘respect for the proportions that Rossini established’). Even more hard-done-by was Susana Gaspar, as Azema. But, bass
Gianluca Buratto made a striking impression as the high priest, Oreo – sonorous and insightful. A white-suited James Platt, raised on a pedestal in the RAH
Arena, bellowed even more cavernously than usual, with the aid of a microphone-effect, and King Nino’s vengeful commands sent a shiver up the spine. 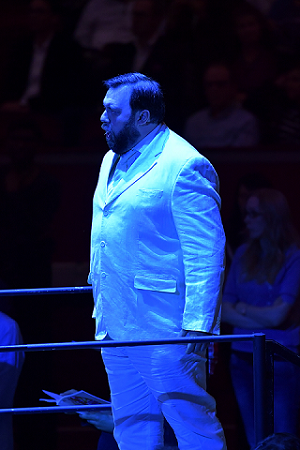 Mark Elder clearly enjoyed himself. He exhibited a truly impressive grasp of the structure of the score, balanced with the relative import of the small
gestures – and certainly had the means to communicate this appreciation to performers, and thus to the listeners. The Opera Rara Chorus sang splendidly. In
the long overture Elder brought out all of Rossini’s intriguing orchestrations and he conducted throughout with muscularity and flexibility. Tempos surged
perhaps rather too precipitously at times but as there were only a few cuts, this may have been judicious.

Wagner commented acidly that Semiramide exhibits ‘all the faults by which Italian opera can be distinguished’. Yet, on the evidence of this
performance it seemed to me that one might argue that with Semiramide Rossini ‘saved’ opera seria with a medicinal dollop of glorious bel canto.

I had just one proviso. Four hours on RAH swivelling, low-backed seats left me – at moments during this Sunday-evening performance which commenced at 7pm –
occasionally wondering if physical punishment would out-weigh the pleasures offered by Rossini. An Opera Rara recording is forthcoming and I look forward
to being able to enjoy this terrific opera at a single sitting in more comfortable environs – and without a late-Sunday dash home. BBC please take note!