A slow pace and static stage dynamics made in the beginning for a difficult sit during veteran German stage actor Klaus
Maria Brandauer’s monologue: a highly challenging first half hour. However the second part offered very memorable musical scenes. Haas’s
resonant soundscapes made the trip worth it in the end.

Norwegian author Jon Fosse wrote the libretto based on his novel. In the first part, his sporadic words sound more like exclamations within Haas’
score. The opera contrasts the mystery of arriving in life with the confrontation with death and the hereafter at the departure. “Morgen”
(morning) revolves around the birth of fisherman Olai’s (Brandauer) son Johannes.

In the second part, “Abend” (evening), Johannes is old. His daughter Signe takes care of him. Then he wakes up and sees his deceased wife Erna
and best friend Peter. After he calls out to his daughter, who can’t hear him, he realizes he has passed. The slender libretto gives the listener all
the space to absorb Haas’ spectral cosmos. 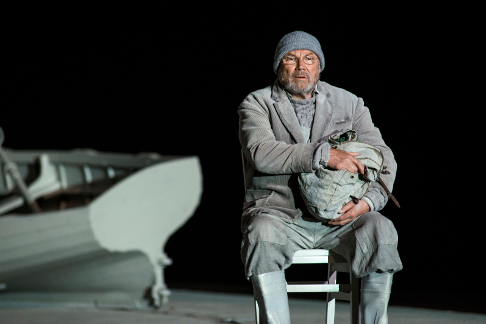 Director Graham Vick seemed inspired by Samuel Beckett’s minimal setting, but without the absurd humor. His Endgame comes to mind during
“Morgen” as Olai sits alone and speaks in fragments. Together with broken-white costumes, Richard Hudson’s abstract design includes a
door frame, a bed, a fishing boat, and several other items scattered on the ashen colored set. Video by 59 projections (A creative direction collective)
screened words on stage. Giuseppe di Iorio’s lighting gave the staging the necessary final flashy energetic surge at the end.

The Austrian composer’s soundscapes are rooted in French spectralism, a musical current from the Seventies that can be traced back to Messiaen and
even farther to Debussy. Haas’ moods and microtonal effects remind of Ligeti, but his colours and texture recall Kaija Saariaho, though with less
detail and instrumental contrast. What Haas lacks in variety, he makes up with raw intensity that slowly grows on you and eventually envelopes you as
listener. Before you know it you are captivated by the drama of the second half.

With great focus, Michael Body led the enormous orchestra. He generated great resonating flow from the strings, creating a thick textures. Besides the
musicians in the pit, a panoply of percussion stands on each side slightly elevated from the stage. From there, thrilling pounds (or should I say hits)
open the work and jolt the audience. Then, though, the libretto’s infrequent rhythm in Brandauer’s monologue about his son’s birth
undercuts the production’s momentum. Towards the end of “Morgen”, the pace picks up. With fluctuating intensity, Haas’ soundmass
swells and contracts in volume and density, as if a giant musical organism whose breathing results in a mesmerising continuous flow. 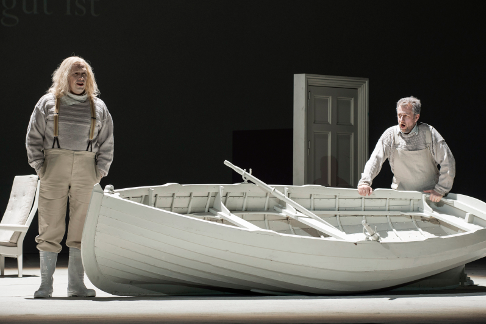 During “Abend” Haas also includes vocal echoes of late-Romantic lyricism. It added a human dimension to Haas’s alien world during the
interaction between Johannes and his daughter Signe. After, Johannes comes to terms with his passing. The opera ends in Haas’ soundscape of the
hereafter.

The rest of the stellar cast impressed. Sarah Wegener as the midwife broke into Olai’s monologue announcing Johannes’s birth as if an
invigorating breath of fresh towards the end of “Morgen”. Baritone Christoph Pohl made for an engaging Johannes. He infused the character with
conflict and a sense of bewilderment after becoming aware of his death. Contralto Helena Rasker convinced as his wife Erna, while Will Hartmann
demonstrated his technical skills in the vocally demanding part of Peter.

If you are interested in hearing exciting soundscapes of orchestral colours and textures, this opera comes highly recommended. With this minimal staging,
you can close your eyes and listen to Haas and be transported to a musical world of contemplation about birth and death.