As the voices had the best kind of chemistry, the extremes of musical
excellence and ugly setting made for an ambivalent experience.
Thalheimer’s staging will be difficult to forget, because the great
resonance of the energetic music, passionate vocals, and Martin Wright’s
choir made it highly memorable.

While Weber’s Der Freischütz is not often performed, the
‘first German Romantic opera’ has increasingly more new productions
popping up across Germany. Based on a folk legend Friedrich Kind wrote the
libretto: about Max the forester, his love for the head forester’s
daughter, Casper his nemesis’s envy, and the forest demon, Samiel, up to
no good. Magic bullets, female forebodings, spirits of the dead, dark magic,
and the forest setting contribute to the work’s rich Romanticism. The
Overture and the Wolf’s Glen Scene music are often performed in symphony
halls. Weber weaved German folk tunes in the dark Romantic score.

Olaf Altmann’s grey stage, made up of a hole in the back of the stage
as entrance of a metallic cavern through which the people crawl on stage. Olaf
Freese’s lighting helped brighten the grim tone with his atmospheric,
sometimes colourful effects. Thalheimer has been directing more and more opera
(I was also disappointed by take on Verdi’s Otello in Antwerp).
He leans too heavily on his concept and forgets humanistic aspects: an
intellectually provocative concept still needs an emotional dynamic. 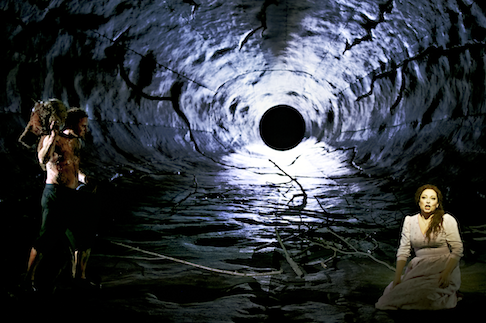 The highly theatrical gestures during the drama undermined any refined
emotion. The over-acting singers made caricaturesque facial expressions, that
led to a void of emotional authenticity between the singers, although through
their voices they regained their sense of humanity.

The most baffling concoction was Thalheimer’s Samiel, performed
effectively revolting by Peter Moltzen with unnerving spoken dialogue. But
towards the end it was impossible to find meaning in the demon’s
monstrous gestures. In unsettlingly choreographed scenes, he becomes a puppet
master that controls several characters with unseen strings. 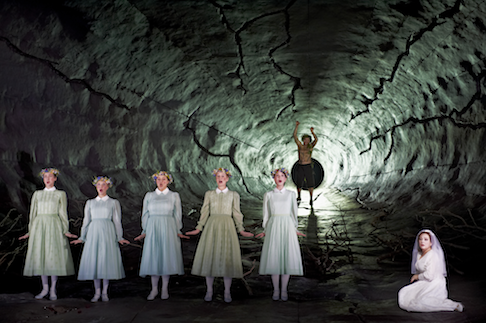 Not to be outdone, Dorothea Röschmann equally dazzled with authentic
virtue as Agathe. She is modest letting her voice convince. Her purity moved me
to tears with her “Und ob die Wolke sie verhülle”, as she
prays to heaven to protect her after her foreboding dream where she is shot by
Max.

Tobias Schabel as Casper stimulated an eerie atmosphere in his
“Schweig’, schweig’! damit dich Niemand warnt”, where makes his
faustian pact to deliver Max to Samiel.

With Soddy the strings produced brooding resonance. The orchestra delivered
a ceaseless luxurious sound. With Martin Wright’s preparation, the choir
sang with crystal clear diction and impressively dynamic volume. The
choir’s intensity led to thrilling shivers and goosebumps. Its highlight
the Huntsman’s Chorus in Act III, where Thalheimer has the members hold
beer mugs in typical old-fashioned German gear.

One of Thalheimer’s effective changes came from cutting out nearly
fifteen minutes of spoken dialogue. Although the story became a bit more
difficult to tackle, these cuts resulted in two uninterrupted hours of
fast-paced musical momentum from Soddy and the Berliner Staatskapelle, which
made the experience still very much worthwhile.