First, Anna Netrebko whetted appetites by announcing that she would sing the notoriously demanding title role, but then dampened spirits by withdrawing,
citing changes in her voice since she signed up to the role four years ago. Hopes were raised again when Bulgarian soprano Sonya Yoncheva was released from
her scheduled commitment to sing MimÏ at the Metropolitan Opera, and stepped into the priestess’s robes.

The return of the Catalan theatrical group, La Fura Dels Baus, headed by the directorial duo of ¿lex OllÈ and Valentina Carrasco alongside designer Alfons
Flores, who gave us such a striking and universally acclaimed Oedipe at the ROH earlier this year
(Oedipe), added further expectancy. And, recently, OllÈ
himself raised the temperature yet higher, hinting in a Guardian interview that in this production the creative team aimed to emphasise
the extremism of the opera, its religious and political fanaticism, ‘to bring it all up-to-date’ by depicting a society under the grip of hard-line
zealotry, presenting what he describes in an ROH programme article as ‘images that reflect today’s religion, today’s militarism and today’s political
elite. In the event, though the funeral pyre burns brightly, the production itself doesn’t blaze with its promised energy.

It’s the religious context which looms largest. Literally, that is, in the form of the hundreds of crucifixes that are festooned on the stage walls, like a
heavy metal album sleeve-cover, forming a forest of suffering from which later descends a crown of crucifix-thorns. The eponymous Druid priestess has
become the leader of a tribe of hard-line Catholic paramilitaries and OllÈ, Carrasco and Flores take inspiration from the Spanish Inquisition and groups
such as Opus Dei in their depiction of a brutal, callous world of shadowy rites and violent indoctrination. The sight of school-uniformed children in
ritual dress – red, white and black, sky-high triangular hats which seem to blend the Ku Klux Klan with Harry Potter – is chilling.

But, the Romans – wearing gangster suits and shades – don’t get much of a look-in. The Druids don’t need external oppressors; they are making a pretty good
job of oppressing themselves. And, so the political dimension of the opera is weakened. Norma’s struggle between her private love for the proconsul
Pollione, with whom she has secretly had two children, and her public duty to her fellow Gauls, who urge her to lead a rebellion against the Roman
interlopers, is replaced by an internal tussle between her own two fanatical traits – her human passion and her fundamentalist faith. 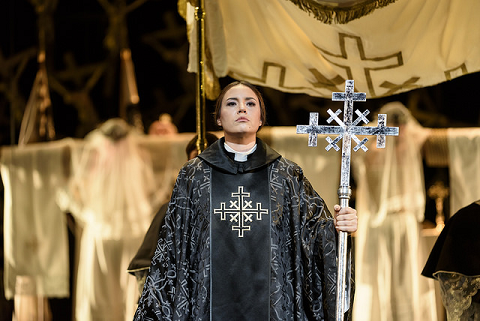 We are also offered a domestic world far from these extremes when we enter Norma’s apartment in Act 2 and find her children curled up on the sofa watching
television – its flickering images an irritation during Adalgisa’s confession that she has rashly fallen in love, ‘Sola, furtive, al tempio’. When
they get bored, the children whizz about on a tricycle or bounce around on an orange space-hopper, again somewhat distractingly during the big
female-bonding duet, as Norma forgives the wayward younger priestess.

Yoncheva gives a brave and impressive performance in the title role, but her voice – though technically assured and well-shaped of line – isn’t quite
mature enough yet for the role, musically or dramatically. Yoncheva was an imperious priestess but her depiction of Norma’s unbridled, desperate love for
Pollione, and the extremes to which this pushes her, was less convincing. The tone was a little hard-edged at the start, though it softened beautifully for
‘Casta diva’; but the requisite nuance was missing and on a couple of occasions the breath-control felt effortful. It didn’t help that this show-stopper
wasn’t allowed to ‘stop the show’, for the directors chose a moment which surely demands absolute focus on the singer to waft a large incense burner over
the front row of the stalls.

As Adalgisa, Sonia Ganassi had greater variety of range and richer layers in her mezzo, though this wasn’t a technically flawless performance and her voice
is perhaps past its prime. In fact, the two voices seemed the ‘wrong way round’, with Ganassi suggesting the depth of experience that properly belongs to
Norma. Joseph Calleja did his best to make Pollione more than a bad-guy-bully, and his lovely tenor did much to encourage us to add a few drops of sympathy
to our prevailing aversion. It was a full-on vocal performance though, and a little more variety of dynamics and colour wouldn’t have gone amiss. Brindley
Sherratt wasn’t helped by the directorial decision that he should commence his opening aria at the back of the stage – perhaps all directors should take
lessons in acoustics before they inflict themselves on long-suffering singers – but he put in a solid, if sometimes ragged, turn as Norma’s father Oroveso.
The minor roles of Pollione’s friend Flavio and Norma’s confidante Clotilde, were sung competently by two Jette Parker Young Artists: David Junghoon Kim
and Vlada Borovko respectively.

Antonio Pappano started the overture with a heady rush of bel canto ardour, but after twenty minutes or so he lowered the orchestral pulse rate which may
have been just as well because the ROH Orchestra – who played stunningly – still overpowered the cast at times. The Chorus were in characteristic fine
voice, but their movement was frustrated by the stage furniture – desks, pews, altars, crucifixes and the like – and could do little more than stand stock
still and sing luxuriously.

So, La Fura dels Baus have now given the Covent Garden audience an Oedipe whose visual scheme was inspired by a catastrophic chemical spill in
2010 which saw one million cubic metres of corrosive waste dumped on western Hungary – ‘that mud […] in our minds was also linked with the myth of man’s
creation from primeval clay [and] symbolizes the plague that devastates Thebes, and is also the means by which the contagion spreads’ – and a Norma triggered partially by George Bush’s notorious announcement after the 9/11 attacks that the US would launch a ‘crusade’ against Islamist
terrorists. Perhaps it’s time for a production which looks inwards, into the opera’s own score and drama, rather than outwards at the modern world. A work
such as Norma which contains so many universal conflicts, dilemmas and passions has more than enough human drama with which the modern
audience-member can engage.

That said, the directors do save one unexpected twist for the closing bars and there’s some fine singing and playing on offer, if you can extricate
yourself from the stranglehold of crucifixes.