Effective casting is the first key to a successful rendering of this bel canto masterpiece, and OSJ most assuredly did not disappoint. The fact that the four leads were drawn from the roster of Resident Artists speaks volumes to the careful selection and nurturing potential of that successful program.
First, let’s focus on the mesmerizing performance of Sylvia Lee, who assumed the title role. Thanks to the success and widespread fame of several high profile exponents in the immediate past (Callas, Sutherland, Sills, Gruberova) the part has come to be regarded as somewhat an Everest in this Fach. Happily, Ms. Lee scales this mountain of musical and emotional challenges and makes a compelling case for Donizetti’s dramatic writing.
Ms. Lee is diminutive and empathetic, sweet without being saccharine, and she commands our attention whenever she is onstage. Her silvery, limpid soprano is wedded to a solid technique that encompasses not only the pathos of the girl’s dilemma, but also serves all the coloratura flights required in passages of elation and madness alike.
Sylvia has a poised tone that especially shines when she soars above the staff and pings dramatic phrases off the back wall. Her middle and lower voices are similarly well-schooled, although a certain anonymous whiteness can creep in at levels below mezzo forte. Her towering Mad Scene was a model of beautifully calculated effects. If her overall artistry at this point is not as individualized as the divas mentioned above, this will come in good time. As it is, Sylvia Lee is giving a powerful star turn. 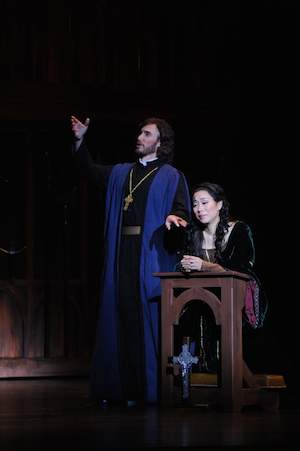 Colin Ramsey as Raimondo and Sylvia Lee as Lucia
It is arguably harder to locate a great Edgardo than a great Lucia, such are the daunting requirements set out for the leading man. Luckily, OSJ has a prodigiously gifted tenor in its residency: Kirk Dougherty. This versatile performer has never sounded to better advantage than as the romantically driven, politically volatile Donizettian hero. Mr. Dougherty’s honeyed legato singing ravishes the ear, and his ringing dramatic declamations have a thrilling squillo. Moreover, he is a handsome, natural actor who is a master of economy of gesture.
The availability of such an accomplished and indefatigable Edgardo allowed Opera San Jose to include the oft-omitted Wolf Crag’s Scene which made a fine effect thanks to the willing partnership of the sturdy Enrico from another Resident Artist, Matthew Hanscom. Mr. Hanscom has racked up an impressive resume at OSJ and Sarasota essaying roles that are all over the map, but the standard Italian repertoire fits him like a glove.
His is a beautifully rich, rolling instrument that possesses allure and power in all registers and (almost) all volumes. I wish he would check his tendency to occasionally over sell the forte upper passages when Matthew seems to get over committed to the “drama” and pushes the tone sharp. Never you mind, the San Jose public gave him a hero’s ovation at curtain, as much for his Enrico as for the body of solid work he has done for the company.
Bass Colin Ramsey (another R.A.!) was a revelation to me as a beautifully calibrated Raimondo. Until Mr. Ramsey, I have never been persuaded by this role or its musical characterization. But on this day, his majestic, orotund, ravishing bass and sincere acting made as good a case for this part as I imagine is possible. Arturo is usually cast with a young, aspiring tenor, lamentably felled by unfortunate circumstances. Here, casting against type, character tenor Michael Mendelsohn was a rather unsavory, older predator, his reedy delivery adding an unctuous element and a fresh dynamic to the arranged marriage.
Yungbae Yang was a good dramatic presence as Normanno, and his evenly produced lyric tenor contributed gleaming vocalism. Anna Yelizarova was deluxe casting as Alisa, her rich mezzo not only characterful in her solo lines, but also radiant in the famous Sextet.
Ming Luke conducted a responsive orchestra with a fine sense of style and excellent forward direction. Maestro Luke seems to know that dramas need as much attention to pacing as comedy, and he showed an uncanny ability to ride the applause after set pieces to admirably propel the drama onward. While the entire band executed this vintage Donizetti with dedicated acumen, the principal flute proved a haunting character in the plot as it superbly partnered Lucia in her well-known cadenza of increasing insanity. Powerful duo, indeed! Andrew Whitfield’s full-throated chorus was in fine form. 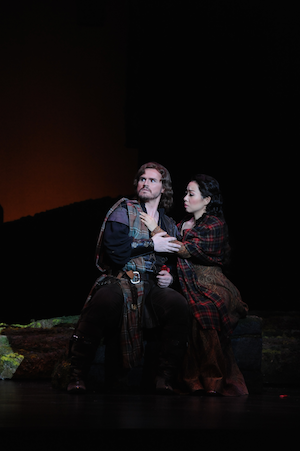 Kirk Dougherty as Edgardo and Sylvia Lee as Lucia
The attractive set design by Steven Kemp provided an atmospheric, practical environment that was visually appealing and practical. The handsome, wood-paneled great hall was dominated by an imposing staircase up left, but its best stroke was an entry stage level up center, a shadow-box sort of affair that allowed for a stunning entrance of the unhinged and bloodied Lucia fresh from the murderous bridal chamber.
The beautiful forest scene, at once featuring verdant mounds of grass and leafless tree trunks, drew a gasp from the audience when it was revealed. Such was its austere beauty. Oddly, when this scene was altered between I-1 and I-2 to add the requisite fountain, a row of trees was left suspended halfway to the flies, trunks dangling in the air. Just as I thought “this may be a mistake,” the other row of trees was yanked up to equal them! Hmmm. As one old lady audience member once hissed to another after the handkerchief scene in a Met Otello, “That must have been about something.”
There was no confusion at all about B. Modern’s superlative costumes. B’s sumptuous period creations were at once earthy and sumptuous. Characters’ stations were well-defined and the overall look firmly grounded us in time and place. This was a significant achievement. It did not hurt that all elements were creatively lit by Sean A. Russell. Mr. Russell manages to create brooding environments without ever relegating the performers to patches of darkness that seem to invade lesser designers’ work in such moody genres. He also focuses and frames the action well, directing us just where to look at critical dramatic moments. Jessica Carter’s Wig and Make-up Design was also highly effective, although from my vantage point in the front orchestra Lucia’s crucial post-murder ‘pale look’ verged perilously close to clown white.
Benjamin Spierman directed an imaginative, fluid production that was chockfull of fresh ideas. During the brief prelude, Edgardo appears, contemplative, troubled, considering a red flower that he carries. Eventually he places it on a grassy knoll, perhaps as a premonition of Lucia’s grave. Or perhaps not. Its beautiful vaguery engages us immediately and allows us to speculate. The red flower is a visual leitmotif that carries through the entire piece.
The character relationships are tellingly developed, and meticulously detailed. Blocking is well-motivated, uses the entire playing space effectively, and explores a great variety of stage pictures. Mr. Spierman is especially adept at moving the large chorus on and off stage with expeditious efficiency. He added a chilling touch to Raimondo’s annunciation of the new groom’s demise by having him kneel on a prie-dieu and put his face in his hands, which then streak his cheeks with the blood seemingly picked up from the cleric’s having cradled Arturo’s corpse. Horrifying, but perfect use of subtext.
In tandem with his gifted soprano, Mr. Spierman found limitless nuance in the extended Mad Scene, alternatively having her stagger, pitch, swoon, threaten, sink to the floor, and recover to threaten more slashing a la Nightmare on Elm Street. This was riveting stuff, and almost faultless in its dramatic shape and emotional impact. Only one moment was ill-timed, when Lucia suddenly threatened Normanno with a throat-slitting which prompted his too-quick bug-eyed horror, prompting unintentional laughter. But that is a matter of fine-tuning. This was a heady dramatic realization.
At the end of the day, Opera San Jose has produced a stylish, risk-taking, skillfully sung and played rendition of a beloved warhorse that was spontaneous, thoughtful, traditional (in the best sense of that word), and immensely crowd-pleasing.
James Sohre