Strange programming at San Francisco Opera. While these October performances of Janacek’s penultimate opera do mark the 50th anniversary of its American premiere (at SFO in November 1966) one might have wished for a change of opera — not theme. For one of many examples we might have had Janacek’s last opera — From the House of the Dead instead, a surpassing masterpiece that has yet to find its way to San Francisco.
But dismiss that thought. In many ways this seems like the first time we will have witnessed this strange Slavic comedy here in San Francisco, given a convergence of factors — notably a comedienne of such dimension that we were irrevocably and directly present at the final collapse and total disintegration of a 337 year-old woman, and, strangely, the absence of a star conductor, leaving us with the raw, unfiltered power of the Janacek orchestral specter. It was an evening of monumental art.
There will be many of us San Franciscans who recall the veritable Who’s Who of Makropulos Case personages over the past 50 years — the Paul Hager production of 1966 with the forever mourned Marie Collier (our Tosca when Maria Callas was not), the 1976 remount of the same sets but with legendary Anna Silja directed by the young David Pountney, conducted by Ern? Dohn·nyi, the 1993 remount of the same cloth painted sets now staged by legendary soprano Elisabeth Sˆderstrˆm and conducted by famed Janacek champion Charles Mackerras. Then finally in 2010 a new production. French born, Germany based director Olivier Tambosi created a vehicle for the powerhouse presence of Karita Mattila conducted by esteemed Janacek interpreter Ji?Ì B?lohl·vek. 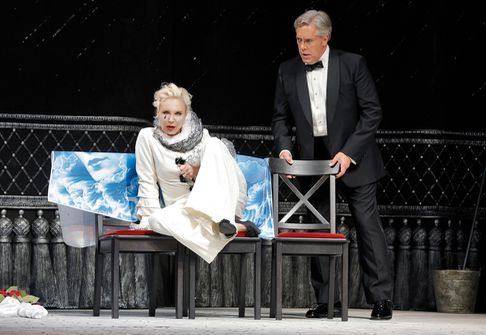 Nadja Michael as Emilia Marty, Stephen Powell as Baron Jaroslav Prus
But it has taken Leipzig born, Berlin based, American educated (IU) Nadja Michael to realize the Emilia Marty (formerly Elina Makropulos et al) in deepest and truest and most vivid essence on the War Memorial stage, aided in no small way by stage director Tambosi in this remount of his turntable, solid-walled production. The lithographic scenic texture grounded the storytelling in timelessness — even with the naive, gratuitous real time clock. The concentrated playing areas forced the action into high theatrical pitch, and the lighting burned through the threads of time with maximum intensity.
Soprano Nadja Michael was one with her costumes and platinum wig, brilliant quotations from historic haute couture, teasing where high fashion crosses into theater (and cinema) and visa versa. Her costumes gave free flow to the supple physical contortions she effected, that took us to a confusion of the real with the irreal, blurring human and the supernatural. Mme. Michael possesses a strong voice and riveting presence that dissolved into moral exhaustion and the finality of her existence. 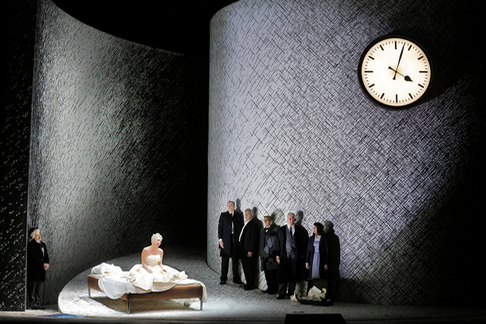 The death of Emilia Marty, Elina Makropolus, et al
But neither the men in her life nor the young singer aspiring to this artistic immortality had the size of personality or voice to illuminate much less confront the very complicated machinations of the plot. I wanted bigger, more important characters to effect the musical gestures of love and longing, hopelessness and realization that Janacek develops in all of his operas. It is possible that this pallid humanity was exaggerated by the naÔvetÈ of the conducting. Young St. Petersberg conductor Mikhail Tatarnikov permitted the primary, primitive motions of Janacek’s orchestral continuum to illuminate the diva but the maestro all but ignored the complex world in which she existed. As well, and disappointingly the young maestro did not achieve the shattering orchestral climaxes that would ordinarily cap each of the acts.
Given the conducting perhaps the supporting characters did not have a chance. Tenor Charles Workman as Berti missed the soaring climaxes of the hapless, incestuous lover, tenor Brenton Ryan, a participant in the L.A. Opera young artist program, does not yet have the chops to muster the intensity of compulsive infatuation. Joel Sorensen brought sharp brittleness to the role of the law clerk Vitek, and as well I found an unwanted caricature in the role of the aspiring singer Kristina, performed by Adler Fellow Julia Adams. As Gregor’s lawyer, Dr. Kolenaty, and Gregor’s opponent, Baron Prus, baritones Dale Travis and Stephen Powell left me wishing for more powerful voices and personages.
Nonetheless it was an exhilarating evening at San Francisco Opera.
Michael Milenski