Giove (Jupiter) has wrought destruction upon the Earth, to punish mankind for their challenge to his authority following their receipt of Prometheus’ gift
of the sacred fire of creation. Accompanied by his trusted Mercurio (Mercury), the all-powerful god descends to inspect the damage and to build anew the
earthly planet, but finds himself enamoured of the nymph Calisto. Discovering his faithlessness, Giove’s enraged wife Giunone (Juno) seeks revenge and
transforms Calisto into a small bear, only for her cosmic admirer to effect another metamorphosis which translates the minor nymph to the heavens to take
her place, as Ursa Major, beside him in the eternal constellations.

Certainly, takis’ designs for Timothy Nelson’s new English Touring Opera production suggest an astral apocalypse: the chaotic stage presents a mechanical
forest of twisted wires, cogs, wheels, out-sized desk-lamps, axles and chutes. But, alongside the whims and wildness of the gods there is scientific order,
rationalism and humanity in the form of the shepherd astronomer Endimione, whose star-gazing leads to his devotion to the moon and to its deific
embodiment, the goddess Diana.

Callisto, the second-largest moon of the planet Jupiter, after Ganymede, was discovered in 1610 by Galileo Galilei. Nelson picks up on contemporary sources
which link the real-life Galileo – who bestowed his telescope as a gift to the city of Venice – to the character of Endimione, and extends the parallel
further by envisaging his rival for Diane’s love, the goat-god Pane (Pan), as the embodiment of Rome and papal authority towards which Venice had a
long-held antipathy and suspicion. Just as theology superseded mythology (‘Pan is dead’), so science has now supplanted theology: a point pressed home by
Nelson, by turning Endimione into an Einstein look-a-like, complete with a mad-inventor wig, violin, and penchant for scrawling differential and integral
calculus on a blackboard, alongside Galileo’s famous retort to the Inquisition, ‘Eppur si muove’ (And yet it moves). So, the Age of Astral Anarchy gives
way to the Age of Enlightenment.

Cavalli had joined Monteverdi’s choir at St Mark’s Venice when he was 14, in 1612, and he was the first composer of opera to win widespread success.
Audiences during the Carnival season, attending performances in the Venetian public theatres which had first opened in 1637, were beguiled by the
composer’s risky combination of rapture, fury and wit with comedy and burlesque bordering on insanity. In La Calisto the heady mix of high and low
passions makes for a challenging whole, and Nelson exacerbated the expressive dichotomy by emphasising the vulgarity of the first two acts so as to sink at
times to the level of low-budget Carry-On bawdiness. Any hint of the work’s Platonic debates about the nature of spiritual love was obliterated by
sexual innuendo.

Cavalli’s musical language can take a while to get used to, as well, and Nelson, conducting as well as directing, adopted a spacious approach which
emphasised the seemingly unvarying nature of the declamatory expression and gently mellifluous accompaniment. Fortunately, after the priapic crudities
pre-interval, Act 3 took a decidedly different turn, as Cavalli’s increased use of overlapping voices and ensemble forms, and what Nelson describes as the
supplanting of irreverence with pathos and intellectual commentary, effected a shift to more cerebral, ethical and creatively enriching realms. In the
latter stages, Nelson pushed the music onwards creating a more captivating muscio-dramatic sweep; there were more flashes of colour from the small
instrumental forces, predominantly continuo instruments, adding sensuousness to the vocal lines.

The Prologue features familiar archetypes, Natura (Nature) and Eternit‡ (Eternity), who introduce the work by foretelling the nymph Calisto’s fate: to be
elevated to celestial dominions. Tai Oney and Susanna Fairburn had difficulty, though, projecting from their positions at the side and rear of the stage,
and this was a recurring problem subsequently as characters manoeuvred around the cluttered set. In the absence of surtitles (only scene-setting titles
were projected), the all-important diction and clarity – Cavalli puts a strong emphasis on the text – were hindered by the acoustic of the box-like stage
which inhibited textual and musical definition, unless characters were placed well to the fore.

But, the cast’s commitment and accomplishment were winning. George Humphrey’s was a vibrant Giove, dressed in gold-brocaded black, and also strong-voiced
in his falsetto, Drag-Queen-Diana transformations. (It’s complicated … but Calisto is the daughter of Lykaon, king of Arcadia and follower of the hunting
goddess Diana, to whom she has sworn to remain a virgin for all her life; Giove pretends to be his wife in order to have his wicked way with the object of
his desire.)

As Diana, Catherine Carby combined a full mezzo of solemn and luxurious momentousness with, by turns, dramatic coolness and fire, to wonderful effect. Tai
Oney’s Endimione was, paradoxically, blessed with other-worldly grace; beautifully expressive of phrasing, the colour more contralto than counter-tenor, he
blended exquisitely with Carby in duet. 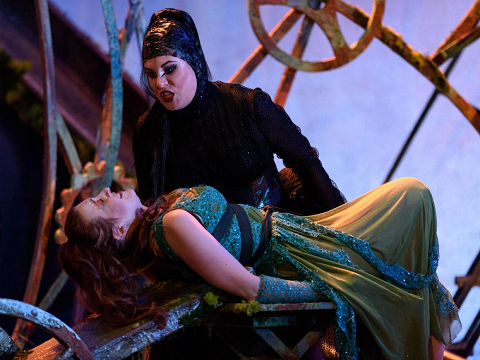 I have sometimes had reservations about John-Colyn Gyeantey’s vocal presence and have on occasion found the tenor wanting firmness of line and evenness of
colour. Not on this occasion though; Gyeantey was superb as the goat-god Pane, raging with rejection and randy petulance. Adrian Dwyer (as Linfea, Diana’s
frustrated warrior nymph), Katie Bray (as a characterful Satirino), and Peter Brathwaite (a sonorous Silvano) breezed raucously through the sub-plots. But,
it was the eloquent avowals of the lovesick Endimione which really touched the heart.

The following evening, English Touring Opera turned the clock back a few years and shifted their attention to the work of Cavalli’s teacher, Claudio
Monteverdi, whose Il ritorno d’Ulisse in patria (here, ‘Ulysses’ Homecoming) was first performed at the Teatro Santi Giovanni e Paolo in Venice
during the 1639-1640 Carnival season.

Once again, we are concerned with the interplay between the immortals and mankind, and as in Cavalli’s opera treachery and deception are outdone by
constancy and virtue. Following the Trojan wars, Ulysses, King of Ithaca, makes a long journey home to find that a trio of iniquitous suitors are harassing
his faithful Queen, Penelope. With the assistance of the Neptune, Jupiter and Minerva, as well as his son Telemaco and friend Eumaeus, Ulysses devises a
trick to defeat the villains, slays all three, and is restored by the gods to his throne and his rightful place beside his loving wife.

Despite the familiar dramatic territory, though, in contrast to the layers of allegory and artifice that had characterised the previous evening’s La Calisto, here takis and director James Conway opt for minimalism and directness, stripping back the opera to its essence. Gone are the gimmicks
and banished is the burlesque. In their place we have an absorbing focus and stillness. The simple set presents a high, white wall, with doors which open
during the Prologue to reveal the gods of Time (Andrew Slater), Fortune (Robert Anthony Gardiner) and Love (Martha Jones); they mock the spirit of Human
Frailty (Clint van der Linde) who, weak and wretched, is subject to the deities’ whims. This construction also has the benefit of pushing the performers to
the fore, whilst, angled, it offers a distanced perspective to the rear. In Act 2 the walls retreat and retract to form three columns, offering useful
hidey-holes for the three suitors.

takis’ colour scheme is gentle and nuanced. The white, mottled walls suggest at once an imposing edifice, a shore-side cliff, and a fragile sea-shell. In
Act 2 the prevailing salmon-pinks and apricots are complemented with aquamarines and ultramarines, Penelope’s vibrant orange adding visual depth, drawing
the eye and pointing to the permanence and unassailability of her fidelity. The unity of design is enhanced when the wooden ‘hooks’ stage-right – the
jetty, the prow of a boat, crabs’ claws? – become Ulysses’ bow, and the red ropes of the ship’s mast, or fishing net, assume the role of the bow’s string.

The cast are unanimously outstanding. Benedict Nelson captures Ulysses’ essential and indomitable strength of body and soul, in a masterful vocal and
dramatic characterisation. Though this is a performance of brooding intensity, Nelson still forms strong bonds with Nick Pritchard’s more energised
Telemachus. Pritchard exhibits tremendous stamina and focus. 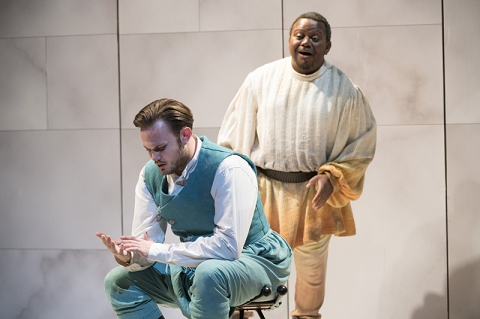 Initially, I worried that the role of Penelope might lie a little low in Carolyn Dobbin’s voice, particularly in the light of the introspectiveness of her
characterisation; but Dobbin proved me wrong, evincing remarkable authority and poise, and thus ensuring that the scene in which she is groped and harassed
by the suitors was cruelly troubling and tense. John-Colyn Geantey once more excelled, as an earnest Eumaeus, injecting great vitality and urgency into the
numbers in which he informs the doubtful Penelope of first Telemachus’ and then Ulysses’ arrival. 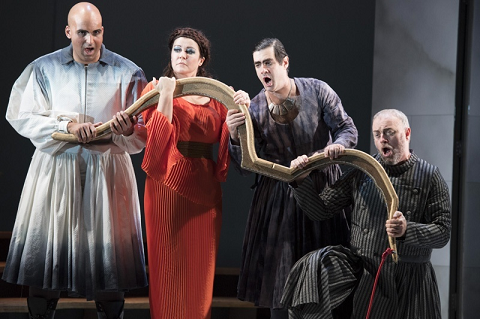 As the suitors’ parasitic follower, Irus, Adam Player (in a garish purple Tweedle-dum fat-suit!) demonstrated good comic timing, but his preening antics
did not overshadow the poignancy of his Act 3 suicide-monologue. Katie Bray repeated her tremendously spirited performance of the previous evening,
surmounting the high-lying line with panache as a commanding Minerva whose rulings and instructions must be obeyed. Robert Anthony Gardiner sang
beautifully as Eurymachus; no wonder he captivated Martha Jones’ high-spirited Melanto. Jonathan Peter Kenny drew playing of compelling vigour and
direction from The Old Street Band.

My only (minor) misgiving came in the final moments when the reunited King and Queen delivered their rapturous duet to celebrate their love. It was
strangely subdued and uneasy. The beloveds were seated side-by-side, gazing forwards – not daring to look, not bold enough to believe, fearful of their
tested feelings? Conway and takis pared things back still further, illuminating the white-clad protagonists in stark white light. This seemed to convey
modernist uncertainty rather than classical consolation?

But, these were mere fleeting hesitations. After last weekend’s fantastic Xerses, English Touring Opera have offered another
two terrific evenings of opera. The productions tour to various venues until 26th November (Autumn tour 2016)