Catherine Malfitano’s production once had a somewhat literalistic yet straightforward integrity to it; now it seems simply to flounder. When I saw it
previously, in 2011, the Personenregie at least proved
generally accomplished; here it veers (too little rehearsal time for a revival, perhaps?) between the non-existent and the all-too-local am-dram. The lack
of any discernible concept thus matters far more than previously it did. We simply have sets and costumes and wandering around. Quite why the Sacristan
looks as though he comes from Shoreditch-cum-Kandahar I have no idea. Nor do I understand the weirdly inter-galactic backdrop for the third act. The rest –
well, the rest is unobjectionable, yet nothing more.

The ENO Orchestra, as usual, was on excellent form. Oleg Caetani summoned up some luscious sounds, especially in the third act, although I found the first
act a little jocular in tone. There was, in general, a reasonable sense of line, although Caetani fell some way short of the more distinguished ‘symphonic’
realisations. (No, it is not really quite the right word, but we all know what it means in this context.) Greater variegation would also have been welcome;
I never felt Caetani was engaging with anything other than the score’s (impressive) surface. Choral singing was also of a high standard; let us never
forget the sterling work the chorus undertakes day in, day out. 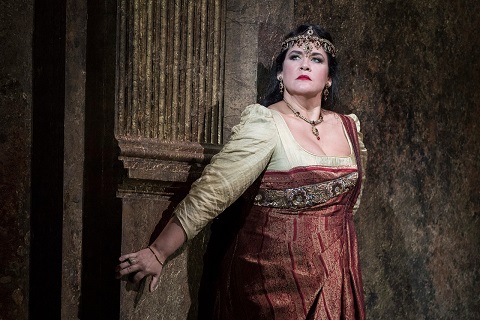 It was not, however, a vintage night for solo singing. Keri Alkema offered an alert performance in the title role, but it rarely caught fire until the
second act, and only intermittently then. Gwyn Hughes Jones clearly has quite a following at the Coliseum. Although he certainly has vocal heft, I was
unable to discern much beyond that in his Cavaradossi: his singing was generalised – far too often a problem in this role, I have found – and his acting at
best rudimentary. Craig Colclough’s underpowered Scarpia came across in strangely camp fashion, at least on those occasions when his voice rose above the
orchestra and/or chorus. I am all for revisionist readings, but pantomime villain faces are not a satisfactory substitute for true malevolence. The smaller
roles, however, tended to impress, Andri Bjˆrn RÛbertsson’s Angelotti, Scott Davies’s Spoletta, and young Alessandro MacKinnon’s Shepherd Boy were all
especially well presented.

There was nothing bad here, then, but nor was there much over which to rejoice. Next time, might we have something that engages with the dramatic
possibilities of the work, rather than pandering to the reactionary ‘taste’ of an imaginary ‘general’ audience? The Arts Council has behaved disgracefully
towards ENO, but timidity never helped anyone, and it certainly does not help Puccini.