Don Pasquale is a most welcome visitor. It is the first of the three operas of the last year of Donizetti’s creative life, and one his few operas based on comedic formulae. Certainly a masterpiece it imposes physical, interpretive, musical and vocal challenges that were somewhat addressed just now in San Francisco.
The bel canto of early Romanticism is ephemeral stuff, far more content exploring the extended delights of fraught emotions than the rapidity and physicality of comedy. Donizetti’s libretto does indeed get serious, the usual triumph of youth over age accompanied by a deeper take on human emotions, though finally their frivolousness is forgiven.
Italian conductor Giuseppe Finzi (former assistant to SFO’s Nicola Luisotti) found the seriousness of musical purpose in Donizetti’s score and its warmth, and sustained the tempo of comedy as well. This gifted maestro discovered the lightness of musical touch, the delicacy of line and the richness of orchestral color that makes bel canto soar, and kept our musical sensibilities on edge for the duration of the opera. 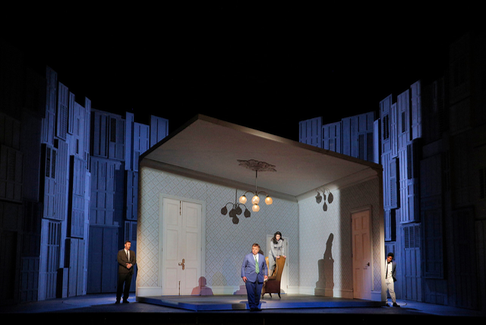 Act I, all principals left to right Lucas Meachem as Dr. Malatesta (no photos of Edward Nelson were provided), Maurizio Muraro as Don Pasquale, Heidi Stober as Norina, Lawrence Brownlee as Ernesto
The Laurent Pelly production ignores Donizetti’s (and comedy’s usual) forgiving humanity, exploring instead the emotional underbelly of spoiled, selfish youth. And finally it dwells on just plain elder abuse. This gifted French stage director divided the opera into two parts, the first (acts I and II) were straight forward comedic antics of contemporary images and sensibilities. It was pure, delightful, mid-last-century humor that melded gracefully into the pit.
Act III (after intermission) moved to comic book colors and imagery, everything upside down — very clever (there was an open curtain set change I did not witness). Norina was now in a crinoline layered, puffed out orange skirt, Ernesto in white, lose-fitting casual shirt and pants, the starry sky was facing up. Mr. Pelly deftly and smoothly managed his actors in crazy antics (Ernesto climbing through a window, though keep in mind that the window is upside down — as was Ernesto!).
Meanwhile however it was the same Donizetti musicality emanating from the pit. The concept short circuited into an abrupt, unsatisfying end because the two Laurent Pelly worlds did not, indeed could not converge, and the coldness of the concept could not reconcile with the intrinsic musical charm of Donizetti’s stock comic characters. We were left dramatically and musically bewildered.
The production was inaugurated at the Santa Fe Opera, with Santa Fe Opera principles, i.e. the back of the stage open into the New Mexico sky, in San Francisco a black void. But the scenery by French designer Chantal Thomas intelligently deployed forced perspective side walls to create the idea of classic comedy’s crossroads. In the center of the stage she constructed an angularly complex revolving structure that focused the story into a small area that wittily moved us in and out of Don Pasquale’s house. The sets well filled the War Memorial Stage.
Even the side walls played their role, the abstracted shapes becoming lighted windows that opened onto the the stage in the last moments of the opera, a hint at least that we were in the finale.
Don Pasquale himself was sung by Italian buffo Maurizio Muraro. A gifted comedian exhibiting genuine Italian buffo style his performance was pure delight beginning to end, his ample girth bouncing lightly off the floor on the several times he was laid out by situation. The role of Dr. Malatesta was double cast, veteran SFO house singer Lucas Meachem for four performances, Adler Fellow Edward Nelson for two performances including the one I attended. This young singer well held his own, but greatly confused the story, his youth and lack of earned buffo gravitas at odds with the dramatic responsibilities of the role.
House singer, soprano Heidi Stober sang Norina. Mme. Stober is a gifted comedian who acted Mr. Pelly’s concept with aplomb, missing however Norina’s youth. Mme. Stober seems to catch all the soubrette roles at SFO, from Sophie in Werther to Magnolia in Showboat, from Pamina in The Magic Flute to Johanna in Sweeney Todd. This fine, demonstrably generic singer did not find the vocal verve for Donizetti’s mid-voice, relying on big, loud high notes for effect. 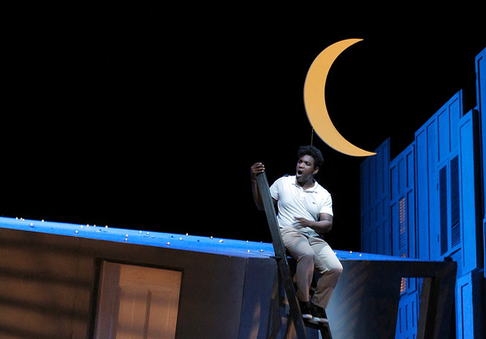 Lawrence Brownlee as Ernesto in Act III
Lawrence Brownlee was the Ernesto in his belated San Francisco debut. Beyond his status as one of the world’s leading bel canto tenors, upheld in this performance, Mr. Brownlee exhibited a surprising physicality and wit that I now understand he has been asked to suppress in recent high-concept productions seen elsewhere (Narciso in Aix, Don Ramiro in Pesaro, Tamino in L.A.).
Of note were the few lines of the Notary appropriately and gruffly sung by Bojan Kneûevi? and the wonderful third act chorus cameo “Che interminabile andirivieni!” delivered with obvious gusto and evident pleasure by 24 members of the SFO Chorus.
Michael Milenski