I’m not sure that I agree, however, with director Kelly Robinson’s claim that both ‘Mavra and Iolanta are variants of the Sleeping
Beauty fairy tale involving a beautiful princess, an enchantment involving sleep and a handsome prince’. Tchaikovsky’s tale of the blind princess Iolanta
and her awakening into light and love certainly presents a dream-like world and a tender portrait of female suffering, sadness and sensual passion worthy
of a sentimental fairy-tale. But, Stravinsky’s Mavra is altogether more down-to-earth, with its pseudo-realistic setting and parodic scorn for the
superficiality of the petty, provincial middle classes.

It’s true that Stravinsky may have had Sleeping Beauty on his mind during the composition of Mavra, for he was working on Tchaikovsky’s ballet
score at this time, devising new orchestrations for Diaghilev’s production of Sleeping Beauty in London in November 1921. But, it was not the myth
itself, rather the aesthetic that Tchaikovsky’s music represented that seeped into Mavra: an open letter from Stravinsky to Diaghilev in The Times in October 1921 avowed the modernist Stravinsky’s admiration for Tchaikovsky, and a further letter to Le Figaro praised
Tchaikovsky and Glinka as being superior to the other nineteenth-century Russian nationalists. Mavra, based on a short story by Pushkin (‘The
Little House at Kolomna’), is dedicated to the memory of Pushkin, Glinka and Tchaikovsky, and Stravinsky described the opera as ‘Tchaikovskian in period
and style’ – by which he meant the blend of Russian folk traditions and Western musical language and form that the older composer achieved in his later
works.

With respect to Mavra, Robinson argues that Beauty’s sleep ‘is analogous to the lethargy and inward-directed focus of the teenager, the time
before becoming an adult. Parasha, with her curiosity and growing fascination with love, but her unwillingness to seek love outside the home, and who draws
the Hussar into the sanctuary ruled by her mother reveals her lack of readiness for the step toward self-hood symbolized in the waking of the “Princess” in
the myth.’ This production did little to convince me of the merits of this reading of the opera – indeed it scarcely seemed to address this notion at all.

Instead, designer Bridget Kimak presents us with a 1950s bourgeois household in which a coquettish, fashion-conscious Parasha – decked out in floral Prom
gown and pink pigtails – runs rings around her mother and their neighbour. The parochial pair – an eye-watering riot of clashing complementary colours and
outlandish red hairdos – slump in front of their vintage TV console and, distracted by their complaints about domestic trivialities, the weather and the
high cost of living, fail to notice when Parasha smuggles her Hussar love, Vassili, into the house in the guise of a new maidservant, Mavra. The update
works well: if we ignore the issue of the servant, bourgeois preoccupations have probably changed little since Pushkin’s day, and Stravinsky’s parody of
small town life rings true. 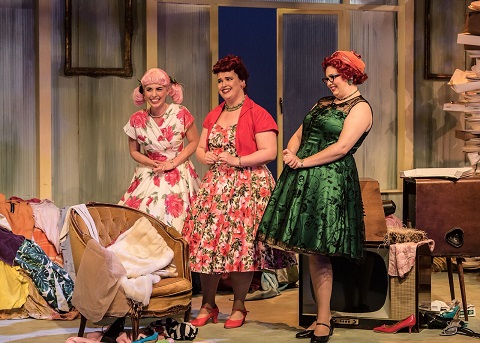 Margo Arsane’s Parasha is no Sleeping Beauty, although the soprano’s free-floating folk tune did – despite, initially, a slightly hard edge to the tone –
evoke a dreamy wistfulness as she flicked through a fashion magazine, nonchalantly scattering random pages onto the tumbling towers of textiles upon which
she was perched. Clearly, the household is in need of a housekeeper to bring the columns of hats and mountains of fabric under control: even the chandelier
is strewn with debris. And, the cunning and resourceful Parasha knows just the person, and the plan, having pragmatically prepared a bra-rope to assist
Vassili’s entrance through the window.

Arsane captured Parasha’s capriciousness and vivacity, and moved easily from the plaintive modality of her folk lament to the decorative exuberance of the
role’s coloratura demands. However, though the opera was performed in English translation, sadly – as one fellow audience member was heard to remark –
Arsane might as well have been singing in Hungarian, so weak was her diction; and this was a failing that was common to the cast, who at times struggled to
be heard above the chugging rhythms and vamps of the wind-dominated instrumental accompaniment.

This was a particular problem for Jade Moffat, as Parasha’s Mother; her complaints about the dearth of good servants lay quite low in her voice and were
lost within the orchestral texture. However, in the more sparsely accompanied passages, Moffat revealed a richly coloured mezzo soprano, and formed a neat
comic double-act with ChloÎ Treharne’s Neighbour. 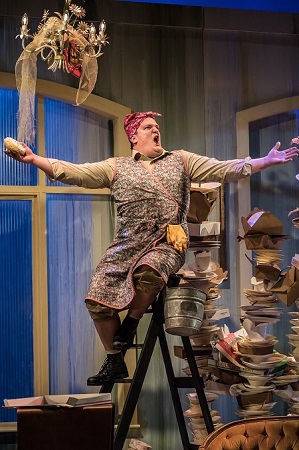 Vassili was exuberantly performed by tenor John Findon who had previously impressed in the role of the flirtatious fop, Oscar, in Martin?’s Alexandre bis in June earlier this year. Findon gave another
characterful and technically assured performance. Vassili’s gypsy song of loneliness was ardent and his manner flamboyantly masculine. It wasn’t clear,
however, why having lathered up shaving suds in a bucket he need to climb a step-ladder to shave; and, though, Vassili scarpered deftly when his cover was
blown by the surprise return of Parasha’s mother, the swift ending felt somewhat anti-climactic.

Wheeler guided the instrumentalists nimbly through the ever-changing time signatures and rhythmic asymmetries, and he drew forth some of the liveliness and
colour of Stravinsky’s inventive score. But there was neither quite enough jazzy vibrancy from the wind and brass, nor breathless excitement in the
ensembles. Moreover, the repetitive, rugged folky accompaniments often overpowered the singers.

Robinson and Kimak swept away the household clutter revealing a minimalist set for Tchaikovsky’s final opera Iolanta, a one-act piece that he
composed to form a double bill with The Nutcracker. Using plain, sliding screens, an invalid’s bed, black and yellow triangular hazard signs, and
some futuristic scientific equipment, they suggest at once a convent, hospital and nuclear laboratory – as the chorus of twenty-six ‘orderlies, armour
bearer’s administrators, nurses, nuns and scientists come and go, gathering fruit, tending the patient, conducting experiments. It’s a world far from the
mountain region of southern France in the 15th century which was the original locale of the libretto, fashioned by Tchaikovsky’s brother, Modest, from
Henrik Hertz’s play ‘King RenÈ’s Daughter’. Gone, too, are the hedge roses and fruit trees which adorn Iolanta’s lush garden – the verdure reduced to a
bunch of red and white blooms atop the coverlet of the princess’s coverlet. But, the retinal imagery – darting, iris-streaking beams of light; swirling
bottomless dark pupil-pits – of K. Yoland’s video designers effect, at the opening and conclusion, a convincing translation to a fantastical zone where
myth, magic, medicine and mystery collide. 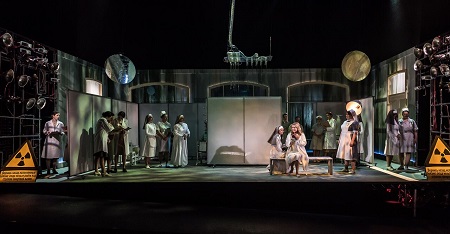 Iolanta, daughter of the ProvenÁal King RenÈ, has been blind from birth. To protect her from knowledge of her affliction, her father has secluded her from
the world; the ladies-in-waiting who attend her are forbidden under pain of death to refer to mention the power of sight, or light. A Moorish physician,
Ibn-Hakia, tells the King that he can cure Iolanta, but only if she realizes that she is blind. Iolanta has been betrothed to Robert Duke of Burgundy; the
latter knows nothing of her condition and wishes to be released from this contract so that he can wed his beloved Mathilde. Ignoring warnings not to enter
Iolanthe’s garden, Robert and his companion Count VaudÈmont stumble upon Iolanta; Robert is afraid and flees but VaudÈmont falls instantly in love. When he
realises that she is blind, he describes the power of the visual sense to Iolanta. Learning of VaudÈmont’s disclosure, the distraught King condemns him to
death. To save her beloved, Iolanta undergoes the cure. Robert persuades the King to abandon the betrothal and the opera ends in matrimonial rejoicing and
a hymn to God’s light. 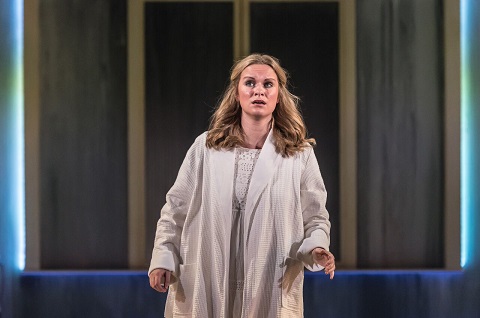 For this half of the GSMD double bill, the Russian text was retained and the cast seemed to cope admirably with the linguistic demands. As Iolanta, Joanna
Marie Skillett negotiated the parlando and arioso lines of the opening fluently. Her soprano has not quite enough lyrical fulsomeness to
allow one to imagine her, yet, as Tatyana, but her fairly light, even voice was well-suited to evoking Iolanda’s outer fragility and inner passion, and as
she gained in confidence Skillett deepened the poignancy of her portrayal.

Dominick Felix was a stirring VaudÈmont, powerful throughout the range and with a glowing top. He wrung every drop of emotion from his affecting encounter
with Iolanta – as when, singing of his infatuation, he asks the princess for a rose the colour of her cheeks and is gifted a white flower by the sightless
girl. Their climactic duet – in which he explains the meaning of ‘light’, only to be answered by her insistence that she does not need light in order to
praise the Creator – was a blaze of music brightness; as the duo’s melodies embraced one to a tremendous orchestral outpouring the effect was wonderfully
affirmative. 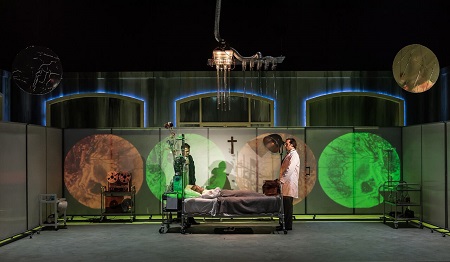 David Ireland communicated both King RenÈ’s stubborn sternness and the softness of his filial love – his prayer for his daughter’s recovery was dark-toned
and moving, and Ireland garnered our sympathy despite the misguidedness of the patriarch’s actions. As the Moorish Ibn-Hakia, Joseph Padfield displayed a
very focused baritone; he made the most of the physician’s modally inflected aria. Baritone Dominic Sedgwick preened fittingly as Robert, launching into an
impassioned panegyric to Mathilde which betrayed the Duke’s self-absorption.

The enlarged instrumental ensemble skilfully created Iolanta’s world of darkness – a world rich in the sensory stimulations of sounds, scents and touch –
notably in the prologue where dark-veiled woodwind gave way to the unfolding threads of solo strings and harp. Wheeler created an atmosphere of
considerable tenderness and sorrow, which only served to make the conclusion, when all share a transfiguring vision of ‘the light’, even more spiritually
uplifting.