The practice of basing both secular and sacred polyphonic compositions on cantus firmi exemplifies this referential symbolism and Josquin’s Missa Di dadi intensifies the use of aural and visual stimuli from the secular world in the service of the sacred to an extreme degree. The liking
of French medieval society for dice games – legislation against which was stringent during the period – would seem at first glance, however, to be at odds
with the purpose of the liturgy: gain without effort was akin to usury, and we might imagine that any musical reference or association was intended in only
the darkest of humorous veins. Phillips links Josquin’s composition to the Milan of the Sforzas, a known ‘hot-house of gambling during the fifteenth
century’, and speculates that the composer possibly ‘joined in with this fashion, at court and in private’. There’s an added ‘gamble’ in that there is some
doubt as to whether the Missa Di dadi is a genuine part of Josquin’s oeuvre at all.

Whatever the conjectures, what is certain is that the tenor line of Robert Morton’s three-part rondeau ‘N’aray je jamais mieulx que j’ay’ provides the cantus firmus, and this aural dimension is enriched by the ‘dadi’ (the Italian for ‘dice’) which appear in the tenor part, signalling
proportionality of form – symmetry in the Gloria and Credo, unpredictability in the Sanctus. For example, the Gloria is preceded by a pair of dice reading
four and one, indicating to the tenor that the notes of the chanson need to be quadrupled in length to fit with the other parts. [1] 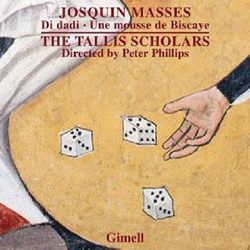 This recording of Josquin’s Missa Di dadi, on the Gimell label, is the sixth album (of a projected nine) in The Tallis Scholars’ project to record
all of Josquin’s masses. Phillips explains the rationale behind the endeavour: ‘I chose to record all Josquin’s masses partly because The Tallis Scholars
have been associated with his music for their entire career, and partly because his masses make the best possible project. 19 masses over nine discs is
manageable – where Palestrina’s 107 masses is not – while their scoring sets them apart in Josquin’s output. Nowhere else did he concentrate so
specifically on four-part chamber-music-like writing, yet every Mass has its own individual sound world.

‘I realised that in his masses Josquin had created a set of pieces of unique quality, designed to explore all the potential within the form, as Beethoven
later did with the symphony. I wanted to gather them all together for the first time, so that the public can appreciate the scope of Josquin’s genius.’

From the first notes of the Kyrie, The Tallis Scholars summon an acoustic richness which is invigorating and dynamic. The balance between unity of ensemble
and the characterisation of individual lines is exemplary. As pairs and groups of voices move apart and come together, with meticulous precision, even bare
fifths have a tension which is released in the succeeding movement of voices. Close-voiced part-writing converges on unisons which then flower into
searching vocal flourishes. Listening to the first Kyrie, one admires the way that the voices enter in turn, adding weight and depth; from the first there
is a stylish confidence in the delivery – epitomised by the purity and focus of the final chord of this section.

The Christe frees individual voices within the polyphonic texture; one is able to focus on the melodic and motivic development of any particular vocal line
while remaining always aware of the symphony of whole. Kyrie II is more ecstatic, with greater rhythmic vitality and a wider registral range; the bass is
especially rich in this movement, and the warm major-key resolution conjures the jubilant effect of a resounding organ.

The Gloria is notable for the seamless movement from chant to polyphony. Rhythmic points gain impetus through repetition and there is a bracing contrast
between rich harmony and unisons at cadences. The setting of ‘Domine Deus, Rex caelestis’ is sparser of texture and darker in tone; and while ‘Domine Fili
unigenite’ descends still further into barer realms, the addition of the upper voices in the ‘Domine Deus, Agnus Dei’ and the greater floridity of the
melodic line lifts the spirit of the music once more. In the ‘Qui tollis peccata mundi, miserere’ we can appreciate what Phillips means when he speaks of
Josquin’s exploitation of the full potential of the four-part texture and mass form: the overall blend of voices seems to soften here, but distinction is
still made between homophonic and polyphonic passages, with solo voices drawn forth, leading to a euphoric climax.

A lovely firm bass in the Credo forms a sure foundation above which the lighter tenors and altos can take flight. The contrapuntal points in the Crucifixus
take on a harder ‘edge’ initially but as the lines become increasingly elaborate they acquire, almost imperceptibly, a mesmerising richness: the emotive
mellifluousness is intensely spiritual, but the homophonic episodes too have great vibrancy.

The freedom and expansiveness of the Sanctus is immediately evident, while the Agnus Dei – especially the second of the three sections – has a refreshing
transparency. This is a tremendous performance of the Missa Di dadi which showcases Josquin at both his most intimate and theatrical.

The disc also includes Josquin’s ‘Missa une mousse de Biscaye’ ≠- a work thought to be the composer’s earliest Mass setting, dating from 1473-75, and in
which there is the same sense of a composer exploring all the possible techniques and forms available to him. Typically, the mass is based on a secular
tune – one with a French and Basque text (Biscay is a province in the Basque region of northern Spain). The French ‘mousse’ is derived from the Castilian
‘moza’ meaning ‘a lass’, and the original song presents a dialogue between a young man, speaking in French, and a Basque girl, who replies to all his
amorous proposals with the puzzling refrain ‘Soaz, soaz, ordonarequin’.

The Tallis Scholars’ enunciation of the text of both masses is characteristically precise and clear. The music of the ‘Missa une mousse de Biscaye’ wanders
quite waywardly through an unusually diverse harmonic palette – perhaps evoking the mis-communication of the lovers in the original song? – but the
singers’ intonation is always true and the progressions sure. Long vocal lines are effortlessly spun, and individual parts come together to form strikingly
plush bodies of sound.

The ensemble brings drama and intensity to the mass. The ‘Qui sedes ad dexterum Patris’ drives forward with rhythmic cogency and the sound is bright and
energising; the singers create grandeur and spaciousness in the ‘Credo in unum Deum’ and expand confidently into the ‘Et iterum venturus est’. Similarly,
after the stillness of the initial setting of ‘Sanctus’ there is persuasive movement into the ‘Pleni sunt caeli’, which in turn swells into a majestic
first ‘Hosanna’ where the light-footed bass line and strong cadence bring a sense of joy.

The Tallis Scholars’ first album in this Josquin series won the Gramophone Record of the Year Award in 1987 and this new addition continues the ensemble’s
masterly exploration of the way the composer’s music reconciles the earthly and the liturgical.

The album is available on CD and from iTunes in their “Mastered for iTunes” format. It is also available in a variety of high resolution Stereo and
Surround Sound Download formats from the Gimell website at www.gimell.com.

[1]
Michael Long presents a comprehensive and persuasive account of the function and meaning of the dice in ‘Symbol and Ritual in Josquin’s Missa di Dadi’, Journal of the American Musicological Society, Vol.42, No.1. (Spring, 1989): 1-22.