Moving forward fifty-two years, we find ourselves in the 400th year since Shakespeare’s death, a landmark which has been celebrated by
such a multitude of cultural events and creations that one might be forgiven for feeling weary resignation when the company of the fictional Barre Players
cry “Another op’nin’, another show!” at the start of Porter’s 1948 musical. But, as Porter’s imagined thespians, led by Landi Orshinowo’s irrepressible
Hattie, rehearse for a new production of The Taming of the Shrew at the Ford Theatre, Baltimore, the toe-tapping magic of Welsh National Opera’s
production is infectious and any sense of Shakespeare-surfeit slips speedily away.

Jo Davies’ production first saw the light of day at Opera North last year, and some of the cast reprise their roles; but the show is a perfect complement
to Verdi’s Macbeth and AndrÈ Tchaikowsky’s new opera The Merchant of Venice with which it forms a Shakespeare-triptych for this autumn’s
touring programme.

Porter gives us a classic ‘play within a play’. As the Barre Players are presenting an adaptation of Shakespeare’s The Taming of the Shrew, life
and theatre, love and drama become entangled. The device provides a commentary on life in the theatre: taming the shrew is as difficult as curing a budding
star of limelight lust. The form also provides a context for the central pair of divorced-but-not-detached artistes, Fred Baker and Lilli Vanessi, who
engage in sexual warfare to rival that of Shakespeare’s shrewish Katharine and fortune-seeker Petruchio.

From the opening number, choreographer Will Tuckett’s mastery of the busy, crowded stage is evident. Soloists come to the fore, small choral groups form
and disperse, dancers whirl, stage-props are manoeuvred. The business is slick, as Tuckett inventively martials the diverse forces. Throughout, the
elaborate stage routines are polished, the complicated manoeuvres deceptively effortless. The chorus blocking is superb, the resourceful choreography
giving the contrasting tableaux great presence and power. 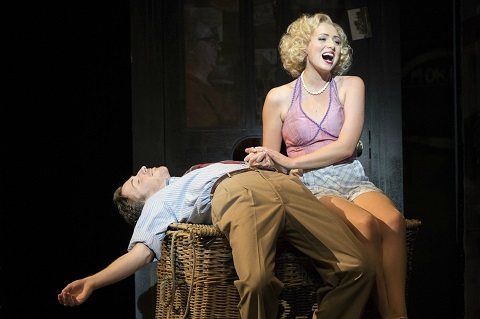 The design is just as suave and beguiling. Colin Richmond captivates us with a striking contrast of dark back-stage – all black flats, staircases,
cluttered dressing rooms, urinals, phone booths and stage doors- and a lustrous performance arena (lighting Ben Cracknell), profuse with rich-hued
Elizabethan green-sleeves gowns, extravagant doublet and hose, a rose-strewn balcony atop Baptista Minola’s colonnaded golden portico, and a sumptuous
parade of lavish nuptial finery. Renaissance-themed tapestries confirm the dramatic dynamic: the elusive legend of The Lady and the Unicorn, which
its motto ‘¿ mon seul dÈsir’, hints at love or understanding, seeming to anticipate the resolution while maintaining the potential for
unpredictability.

The conflict and gamesmanship between the central pair of love-denying, heart-defying protagonists is dynamic. With Jeni Bern indisposed on this occasion,
soprano Claire Wild assumed the role of Katharine – by turns, infuriatingly haughty and winningly capricious. The songs sung by Lilli Vanessi and
Shakespeare’s Katharine showed Wild’s range. ‘So in love’ was sung with fine feeling and sensitive phrasing while the deliciously puffed-up ‘I hate men’
was a feast of feisty fury. Wild’s elaborate vow, ‘Never, never’, was a virtuosic put-down to Petruchio’s demand for a kiss; when Kate’s loftiness earned
her a dressing-down – a bottom-slapping and a humiliating exit atop a cart – Wild was the epitome of injured pride. 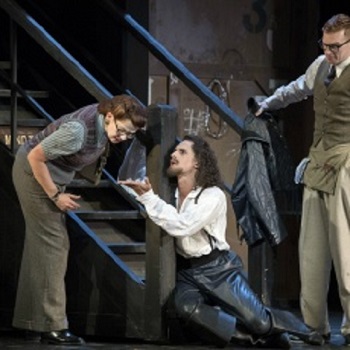 Quirijn de Lang – reprising his Opera North performance (given alongside Bern) – has a versatile and appealing baritone. With his dark, curly locks, and
louche get-up, this Petruchio was a cross between an Elizabethan fop and Alan Rickman’s Captain Hook. New to Padua, Petruchio is looking for a wife and
sees Katharine as a challenge which his masculinity will subdue: he is commanding, rough and bawdy. De Lang struck a fine balance, though, between rakish
confidence and a quieter vulnerability. Petruchio’s ‘Were thine that special face’ and ‘Where is the life that once I led’ were beautifully sung, although
de Lang didn’t consistently sustain the pitch through the held notes. And occasionally, when positioned at the rear of the stage, or when his singing was
directed away from audience voice, de Lang’s baritone was lost within the jazzy orchestration – the role seemed to lie quite low in his voice. But, as the
raffish Fred Graham, he joined with Wild for a sweetly vocalised ‘Wunderbar’, the gentle waltz softly consoling after the dressing-room bitching.

Amelia Adams-Pearce was forthright and jaunty as Lois Lane/Bianca, belting out ‘Always True to You in my Fashion’ with charm and charisma, and sustaining
the sassiness through several reprises. Alan Burkitt was terrific as the all-singing, all-dancing Bill Calhoun/Lucentio. His duet with Adams-Pearce, ‘Why
can’t you behave?’, was playful and sprightly, and in Act 2 he served up a toe-twitching tap routine worthy of Fred Astaire.

The lead quartet were superbly supported by the company of dancers and singers. Max Parker’s nerdy Paul whipped off his waistcoat at the start of Act 2 for
an explosively energetic ‘Too darn hot’ – if he was hot to start with, he and the troupe must have been almost self-combusting after this physical inferno.
Rosie Hay was a portrait of sober pragmatism as the no-nonsense stage manager Ralph whose patience is sorely tried by the over-exuberant thesps. Morgan
Deare was endearing as Kate’s good-tempered, long-suffering father, Baptista, forgiving and indulgent but retaining paternal control over his wilful
daughter. David Pearl’s Harrison Howell was every inch the self-satisfied, stuffy gent from Georgia. 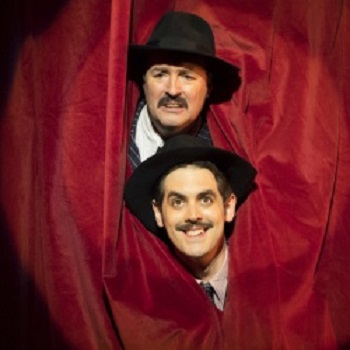 Finding themselves unexpectedly marooned in front of the curtain, Joseph Shovelton and John Savournin ‘improvised’ a fairly restrained rendition of ‘Brush
up your Shakespeare’ – a gentle soft shoe routine with just a dash of camp and a jot of farce – but they relished Porter’s lyrics which explain that
knowing Shakespeare is the key to romance.

Conductor Gareth Jones – who seemed to know every word of the show – led the WNO band in a rousing performance. The overture had plenty of razzle dazzle
and captivating sway, and alongside the glitzy brass, the strings yearned silkily. Jones management of the complex Act 1 finale was masterful.

Amplification was used, but inconsistently, or so it seemed. Some of the numbers sung by the operatically trained singers seemed to be only lightly
amplified, or not at all, and there were some abrupt switches which were disruptive to the vocal colour.

“Another op’nin’!” is the closing cry – all too true given that the cast and musicians were to perform an evening performance just two hours later. And, so
infectious was this terrific Welsh National Opera performance that I’d have liked to have stayed seated in the stalls to enjoy it all over again. Truly
Wunderbar!