The Madama Butterfly of Armenian soprano Lianna Haroutounian may well become recognized as the Butterfly of our time, indeed one of the great Butterflies of all times. It is a role she is just now assuming, thus it is fresh in her voice, mind and body. This freshness makes these performances here in San Francisco unique, an experience not to be missed by operatic lepidopterists — and aren’t we all?
Mlle. Haroutounian arrived at Paris Opera’s young artist program through Moscow, and achieved immediate successes as many of the major Verdi heroines. In 2014 she was miscast as Tosca in San Francisco, a fine singer but simply not the diva Tosca is and must be — in voice and persona.
Mlle. Haroutounian still does not exude the complexities of a diva and this brings the sheen of innocence to her Butterfly that makes it operatically true. The purity of voice that casts her as the unstained Verdi heroine, and the security of her vocal technique sustain the youth and stamina of the 18-year-old Butterfly. The strength and beauty of tone throughout the role’s range underscore the moral certitude of this simple and courageous geisha.
The excited Saturday night audience understood and felt the gravity of Butterfly’s strength and innocence, and awarded Mlle. Haroutounian an ovation the size of which I have never before witnessed in the War Memorial Opera House. 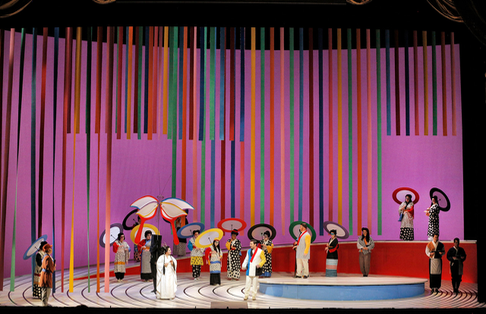 Act I meeting of Butterfly and Pinkerton
The production was a remount of the 2006 Jun Kaneko Opera Omaha production first seen here in 2014. The production is simply a masterpiece. It is/can be pure gesamtkunstwerk — the effective if unlikely synthesis of op art with Puccini’s verismo score. The contradiction of these polar opposite styles relies on a sympathetic rhythm of parallel emotional flows to unite the abstractions of sound with the abstractions of shape. It was perfection in 2014 when the Nicola Luisotti fleetness of musical soul melded with the force of shape and delicacy of movement of the Jun Kaneko colors and images.
Canadian conductor Yves Abel conducts nine of these ten performances. Evidently smitten by the emotional force of Mlle. Haroutounian’s Butterfly he editorialized on the tragedy with volume and bombast. While Mlle. Haroutounian could sail above this much of the rest of the cast could not. Conductor Abel added dramatic pauses (silences) that were annoying, annoying long and confusing — even to the diva.
The actual staging of the singers was once again entrusted to the production’s original director, Leslie Swackhamer, a Seattle based advocate for women playwrights. The production having traveled throughout the U.S. over the past ten years has given Mme. Swackhamer much experience. In this edition Trouble remained on the stage for too much of the second act wrenching focus from Butterfly and Suzuki. Otherwise her staging was without reproach. 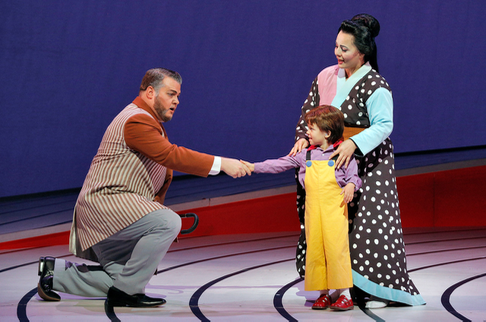 Anthony Clark Evans as Sharpless, Trouble, Lianna Haroutounian as Butterfly
Sharpless was sung by Lyric Opera of Chicago’s Anthony Clark Evans who despite obvious youth succeeded in bringing a deeply felt gravitas to this sympathetic bureaucrat. Mr. Evans possesses a voice of very great beauty he used with intelligence. He moved with a dramatic purpose that did not require the cane he was given, evidently to simulate age.
Pinkerton was sung by young Italian tenor Vincenzo Costanzo who has few if any of the traits of the Italian tenor. The punctuation of such stylistic mannerisms were sorely needed to balance the sheer size of the diva’s performance — the character of a Pinkerton was not vocally etched with sufficient strength to motivate the depths of their joint tragedies.
Yamadori, Butterfly’s ridiculous, old suitor was impersonated by Adler Fellow Edward Nelson who read as about nineteen years old. A lithe, handsome presence he delivered his few lines with elegance, confusing us by presenting a quite presentable, maybe preferable alternative to Pinkerton. Suzuki was sung by Adler Fellow Zanda äv?de. This fine, young singer brought an inappropriate, strongly athletic presence to Butterfly’s passive, compassionate companion, further compromised by a weird, unattractive wig. Goro was sung by Korean born Julius Ahn who contributed a light weight verisimilitude to the role, gratuitous under the circumstance. The Bonze was professionally delivered by Raymond Aceto.
Over the years this splendid production has been seen in many, many cities throughout the U.S., a monument to the high art that can be achieved in American opera. However, in addition to the questionable casting and conducting, the curved background scrim was not carefully stretched, further compromising the integrity of the Jun Kaneko production here in San Francisco.
Michael Milenski