Of those contemporary Bavarian composers who did not go into exile, Hartmann – in contrast to Richard Strauss, Hans Pfitzner and Carl Orff, among others –
refused to cooperate with the National Socialist regime and retreated in a so-called ‘inner emigration’, composing works whose anti-militaristic stance and
utopian socialism condemned them to silent obscurity until after the fall of the Third Reich.

I wonder, too, if Hartmann sensed how prophetic his epic (in both senses) tale of indiscriminate brutality would prove to be. Simplicius predicts that the
peasants will rise up and slay the Governor and his court, and so the rebellion comes to pass. Hartmann, likewise, is often seen as a truth-teller who
could foresee that the Nazi regime would be destroyed by external agents. A general protest against war and also a specific swipe at the social and
political repressions of the Nazi era, Simplicius invites us to imagine that the composer saw the writing on the wall; and this oracular quality
probably accounts for at least some of the interest in a work which, although undoubtedly gripping, is musically uneven.

By the mid-1930s, Hartmann (1905-63) had witnessed his own thirty years of war and social crisis: the sight of injured soldiers returning from the trenches
of the First World War was followed by Hitler’s rise to power, with the unstoppable march towards a new world conflict that the latter seemed destined to
bring about. Simplicius was dedicated to Hartmann’s brother, Richard, who had fled Germany in 1933. It was first heard on Bavarian Radio in April
1948 and staged the following year in Cologne. Hartmann later revised the work – eliminating the extended sections of spoken dialogue, expanding the
orchestra forces and adding three symphonic interludes – and the second version was performed at Mannheim’s Nationaltheater in July 1957.

The libretto was written by Hermann Scherchen, Wolfgang Petzet and Hartmann himself, after Johann Jakob Christoffel von Grimmelshausen’s novel Der abenteuerliche Simplicissimus which written in
the aftermath of the Thirty Years War (1618-48) in what we know today as Germany, where the action takes place.

At the start a Narrator explains the social and political context, and draws attention to the figure of Simplicius Simplicissimus, an unworldly peasant boy
who lazes away his days tending his parents’ sheep. The meaning of Simplicius’s dream about a tree whose branches are so overladen with people that its
roots experience pain gradually becomes apparent to the young boy, and to us, as he experiences suffering at the hands of a Mercenary who evicts and kills
his parents. Seeking refuge in a forest, Simplicius encounters a Hermit who tries to educate the naÔve lad in the ways of the world. The Hermit’s death
leaves Simplicius alone once more, and he is captured by soldiers who transport him to the Governor’s banqueting hall. The Governor, amused by the boy’s
truth-telling, gives him the role of court jester. Asked to make a speech, Simplicius tells of his dream: the painful roots symbolise the oppressed who
will rise up against their persecutors. In timely fashion, the peasants force their way into the hall and kill everyone apart from Simplicius. The Narrator
reappears and closes the frame with a recapitulation of the opening. 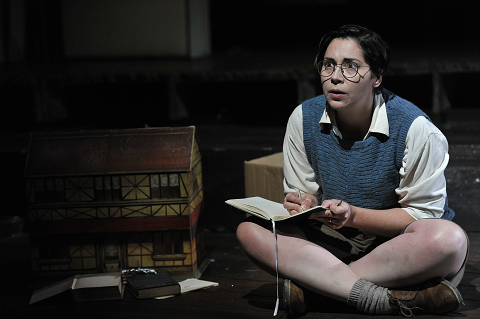 Polly Graham’s production for Independent Opera pulls no punches. It is intense, utterly engaging and all the more impressive for the economical means with
which it achieves its ends. The sparse black cube of the Lilian Bayless Studio at Sadler’s Wells is a fitting venue. Designer Nate Gibson’s split-level set
recreates the particular while inferring the universal. Crates, cardboard boxes and household debris – including a child’s doll’s house that later is
viciously, and symbolically, trampled by a marauding jack-boot – are scattered about a family attic of a war-torn house. Doors to the rear, and a large
picture canvas upon which are projected barren vistas and a burning church, evoke a land beyond the attic walls, ravaged by pillage and war. Subsequently,
a raised circle strewn with suitcases suggests the extent of the ensuing exile. The painting is up-ended at the start of the third and final scene: this is
a world in moral anarchy. Ceri James’ lighting frequently leaves much of the stage in shadow, making the sudden splashes of brightness unsettling
interlopers amid the general gloom. James projects menacing lupine silhouettes to press home that Simplicius, in his ignorance, equates his fear of the
‘Wolf’ that preys on the family sheep, with the pillaging soldiers.

At this performance, the third of four, Hartmann’s score was incisively articulated by players from the Britten Sinfonia, who are nestled on the right of
the auditorium, clearly visible but snaking their way under the raised curving platform. With the percussion placed towards the rear of the under-stage
area, the arsenal of bangs, thumps and clashes bounced with alarming resonance against the platform, creating a disconcerting nerviness. 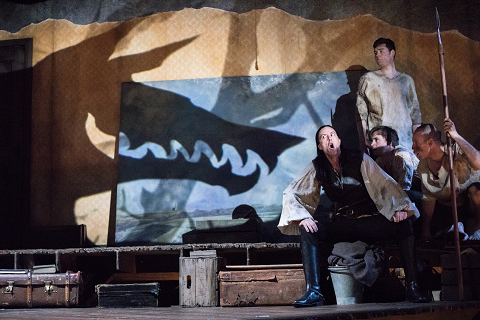 In the long instrumental passages, the music often felt quite balletic, as it shaped the movement and mime. Hartmann’s scenes are essentially tableaux:
there is spoken dialogue, declamatory singing and some songs, but these musical numbers illustrate rather than develop the dramatic action.

During the extensive orchestral prelude, Simplicius enters, innocently playing with simple toys, leafing through a book, chewing a sweet treat; a yearning
Jewish melody, projected superbly by solo viola then solo cello, signalled the context. The string ensemble was fairly small, and at times a greater
richness would have been desirable, but the lean textures and strongly shaped phrases were potent and immediate.

Hartmann’s score is highly allusive; if the overture seems almost an homage to Prokofiev, then Stravinsky, Borodin, Bach, even The Lord’s Prayer, get a
look-in subsequently. This production made use of the 1957 revised score, with a few passages of the first version restored and some debt to Karl
Peinkofer’s 1976 reduced percussion version. Conductor Timothy Redmond did not let one detail escape.

The palette ranged from Weill-like decadence to honest poignancy, by way of many an acerbic march. Perhaps the populist touches do not quite have Weill’s
directness of communication but they make for animated eclecticism. There were moments of pastoralism, as when a flock of sheep rolld in the grass, chewing
the cud, to the bucolic hues of a trio for bassoon, clarinet and oboe. The probing string counterpoint which accompanies the Hermit’s oration becomes a
mis-harmonised Bach chorale, which Redmond crafted – as the pitch rose, repetitive fluttering motifs were introduced and a powerful accelerando took hold –
into a stirring declaration.

Graham makes use of the whole auditorium. The characters – who are to some extent caricatures in the mould of Wozzeck’s parade of grotesques – traverse the
two tiers of the set, wander around instrumentalists, enter from rear of arena; it’s disconcerting to find oneself almost face to face with spear-clutching
marauders. 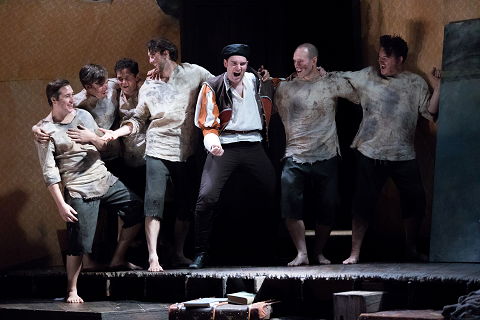 An ensemble of eight men form a flexible collective. Choreographed deftly by Michael Spencely, they are a flock of sheep, a band of mercenaries, gang
rapists, a brigade of Hitler Youth. The Narrator’s opening dialogue is shared between them, and there is a Brechtian quality as they boom their
pronouncements from different placements in the auditorium with chilling matter-of-factness: ‘In Anno Domini 1618, 12 million people lived in Germany … In
Anno Domini 1848, only 4 million people lived in Germany.’

Stephanie Corley’s Simplicius was the embodiment of unaffected unselfconsciousness. In knee-length breeches and knitted tank-top she was every inch the
1930s school-boy. Corley veered convincingly from despair to ecstasy: her carefree songs, sensitive recitative and impassioned aria-moments were equally
compelling. Singing with brightness and lustre, she evoked innocent optimism and candid feeling. Corley’s diction was superb too; indeed, the whole cast
ensured that we heard every word of David Pountney’s piquant new translation, and for once the surtitles seemed unnecessary.

Emyr Wyn Jones’ Farmer states the opera’s core maxim, ‘The peasant plays a noble part/ He is the nation’s beating heart’, singing with a rich tone and full
vibrato which imbue his words with passion. His pocket was picked by William Dazely’s hard-hearted Soldier, who swaggered arrogantly through Simplicius’s
home shredding, if not burning, books, pillaging, razing, and dangling Simplicius by his feet in a painful hand-stand. 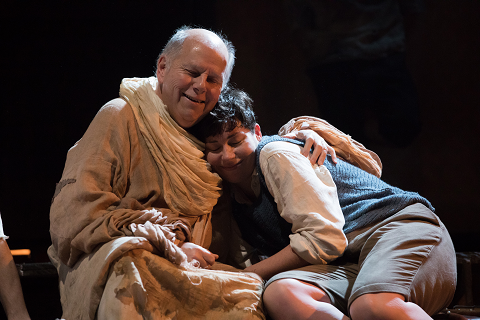 Adrian Thompson emerged from beneath the platform to give a show-stealing performance as the Hermit. His words of Christian compassion contrast with
Simplicius’s unknowing purity of feeling. Singing with impressive steadiness of tone, Thompson grasped every opportunity to project intensity of feeling
and the Hermit’s death scene swelled into a visionary oration of fervent spirituality.

So compelling was Thompson that it seemed a pity to insert an interval between the second and third scenes, thereby breaking the mood established by
Thompson and Corley in the Hermit’s dying moments before the increasingly brutal final episode that sees Chiara Vinci as the Woman (a silent role) abused
and raped. The words ‘Fornication … is a woman’s occupation’ mock her anguish unnervingly.

Marc le Brocq was garish and ghastly as the repugnant Governor, ridiculously conceited in salmon-pink doublet and white tights, terrifyingly deranged as he
devoured the strips of meat lain across the Woman’s bare back and breasts with bestial relish: her flesh is meat, she is an animal – ‘This lady
is a monkey’. Tristan Hambleton’s Sergeant and Matthew Durkan’s Captain ably completed the portraits of nastiness.

The closing moments raged as the unison ensemble, accompanied by violent percussion, bellowed a revolutionary song and the shocking facts which opened the
opera were restated. By this point, we had witnessed a terrible history re-lived, and its images were hard to shake off as one left the theatre.