With Faith Prince as wisecracking Ruth and Nikki M. James as sexy Eileen, Wonderful Town was a fabulous concert that told a story of the “good old days” in Greenwich Village with singing, dancing, and updated jokes.

In the nineteen thirties, Ruth McKenney wrote of the adventures she and her sister Eileen had in New York City. Although they lived in a damp, mold infested Greenwich Village basement for a mere six months, Ruth’s stories of that time have fascinated readers and listeners for three quarters of a century. She first published her tales in the New Yorker, but in 1938 they appeared in book form as My Sister Eileen and the book became a play and movie. In 1953, when Leonard Bernstein added music to Betty Comden and Adolph Green’s lyrics, Ruth McKenney’s tales of life in New York became Wonderful Town. That was the version of the story that Los Angeles Opera audiences saw on December 2, 2016. 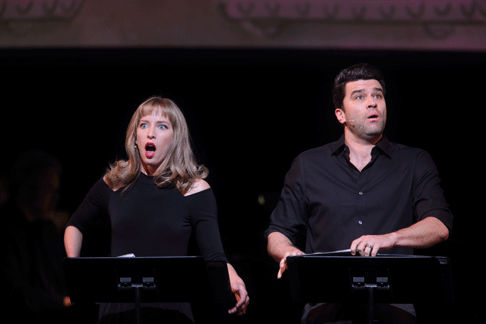 Director David Lee enabled his artists to tell their story in a realistic manner even though their space was severely limited. The projected scenery, consisting of varied watercolor paintings of a remembered Greenwich Village, could be seen over the heads of the cast, chorus, and orchestra. There was always some movement within these Hana S. Kim projections. Although there were no trees to be seen, shadows of their leaves continually moved on buildings at the behest of soft breezes. From my time in the Village I don’t remember any green fire escapes, but they were charming to see onstage. Projected names such as “Christopher Street” were in the iconic font seen on the cover of the magazine, The New Yorker.

Wonderful Town is the first of three Los Angeles Opera presentations of Bernstein musicals, the last of which will be in 2018, the one-hundredth anniversary of the composer’s birth. The story was still set in the nineteen-thirties and Faith Prince was the street-smart Ruth, a role originally played by Rosalind Russell. In the role of Eileen, originally played by Edie Adams, Nikki M. James was as cute as a kitten. Some things never change and Eileen got the attention of every man, onstage and off, even though it was Ruth who wrote the stories for posterity. Both Prince and James created memorable characters and sang with admirable diction. 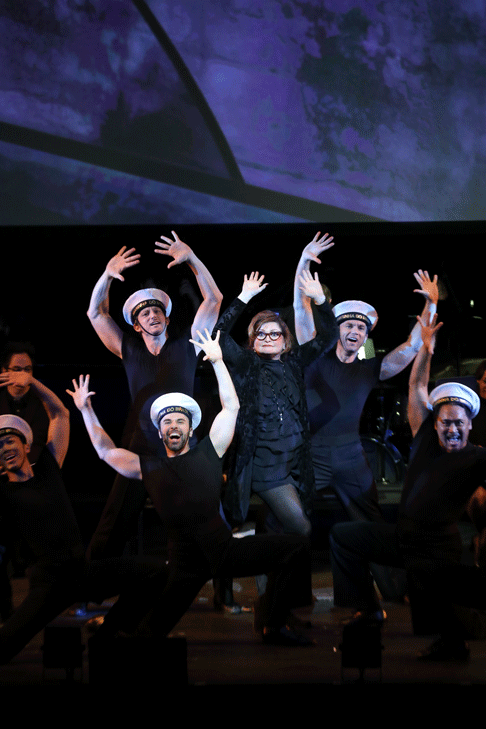 Faith Prince as Ruth Sherwood, with the dancers of Wonderful Town

Nineteen fifties musicals were known for their dance scenes and Wonderful Town was no exception. I was amazed at how much dancing Peggy Hickey’s troupe could fit into a minimum of space afforded them with orchestra, chorus and soloists on stage. The Navy Yard Conga was the whipped cream on a fabulous dessert and James’s cartwheels were the topmost cherry.

One of the stars of this show was the orchestra under the leadership of Grant Gershon who conducted with crisp, forward pressing tempi and took a minute to dance on the podium. Quite a few of its twenty-seven instrumentalists played more than one instrument, too, so the audience heard the sound of a full compliment of musicians. The rhythms were captivating. Bernstein said, “Music can name the unnameable and communicate the unknowable.” It can also keep on communicating for decades after the demise of its composer.