However, the noble — and notoriously fickle — art of comedy can be as elusive as catching a shadow. Often simply boiling down to individual taste, its many stylistic flavours range from subtle irony to full out slapstick. In this case, acclaimed Winnipeg-born director Michael Cavanagh opted for broad(er) strokes, with the production’s crackerjack cast called upon to deliver copious sight gags and cheeky butt jokes a la adult animated sitcom South Park.

Having said all this, the impressive cast of principals is among the finest assembled on this stage, beginning with American baritone Todd Thomas in the title role. Renowned internationally as a true Verdi baritone, this booming powerhouse who also enthralled local audiences as the hunch-backed jester in MO’s Rigoletto in 2012, and Count di Luna during its 2008 production of Il Trovatore performed his third company role with utter conviction. He fulfilled his lumbering protagonist’s emotional trajectory, from his opening declamatory Act I aria “L’Onore! Ladri!” to Act III’s poignant “Ehi taverniere! Mondo ladro,” with the latter solo suddenly revealing the achingly vulnerable, faded hero beneath his fleshy carapace. Thomas’ compassionate portrayal matched by a resonant voice that is its own force of nature crafted a multi-dimensional, all-too-human knight whose shining armor has grown tarnished. 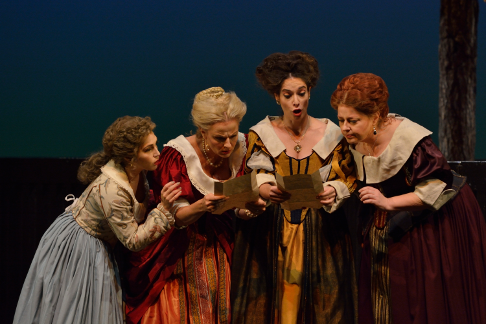 Winnipeg soprano Monica Huisman in her role (and Verdi) debut as Alice Ford infused her character with plenty of sassy backbone, conspiring with mezzo-soprano Lauren Segal’s equally compelling Meg Page during “Alice. Meg. Nannetta” where they mock the “king of all bellies.” Her powerful vocals and own comic chops further testify to this gifted performer’s chameleonic versatility. Mistress Quickly sung by contralto Lynne McMurtry helped machinate the plot like a master puppeteer, sparring and baiting Falstaff with clandestine love notes.

Two MO newcomers were standouts: Soprano Sasha Djihanian as the Fords’ high spirited daughter Nannette radiated with clarion goodness during her Act III aria “Sul fil d’un soffio etesio” while disguised as the Fairy Princess. Her lovesick heartthrob Fenton performed by Kevin Myers brimmed with the impulsivity of youth, his pure lyrical tenor voice seducing the opening night crowed as much as it did Nannette.

The final, triumphant 12-part buffa fugue, in which all come together at the end capped the 150-minute (including intermission) production with its iconic line, “He who laughs last, laughs best.”