For this ‘new’ production at the Royal Opera House, Canadian director Robert Carsen – as he did in Salzburg in 2004 – updates the action from
Hofmannsthal’s mid-eighteenth century, before Enlightenment was superseded by Revolution and Terror, to the time of the opera’s composition, during the
troubled years leading up to World War I.

The curtain rises tantalisingly slowly on designer Paul Steinberg’s Act 1 set, to reveal the formal grandeur of a nineteenth-century Vienna which is
tottering through the increasingly unstable years of the early twentieth. Through the imposing doors of the Marschallin’s chamber emerges Alice Coote’s
Octavian, in crumpled night-shirt; flinging his leg swaggeringly across the arm of a plush Beidermeier sofa in the antechamber, the young Count enjoys a
post-coital cigarette, before RenÈe Fleming’s Marie ThÈrËse appears, drawing him back into her den of sexual intimacy. 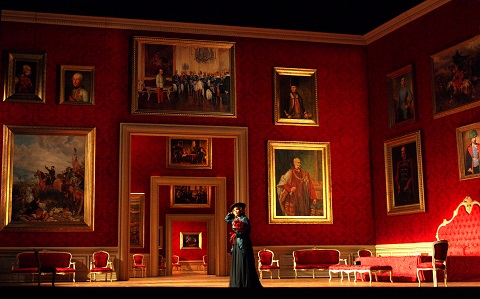 Peeling back the faÁade, Carsen and Steinberg present us with the first of three wide-screen vistas. The angled brocaded walls of the bedchamber span the
stage. The focus, naturally, is the bed itself, larger than most studio apartments in present-day London. The polished parquet floors and plush red pelmets
are reminiscent of the rococo luxury of Hofmannsthal’s original locale; the walls are decorated with portraits of men of measure and might – it’s clearly a
man’s world.

Beyond a door to the rear lie a series of connective antechambers and corridors. Later, when the anxious Marschallin requests that Octavian be summoned
back, so that she can remedy her remissness in failing to bestow her departing lover with a kiss, a dozen footmen appear in a flash, anxiously insisting
that they had done their best, but failed, to waylay the Count’s impulsive departure. Silent servants appear throughout the scene, to move a chair, hold a
salver, or re-position a platter. When the curtain falls on this opening Act, one senses the overwhelming responsibility borne by those charged with
sustaining the identity of a city which, at the crossroads of Europe and the centre of the Austro-Hungarian Empire, has been crumbling for years. 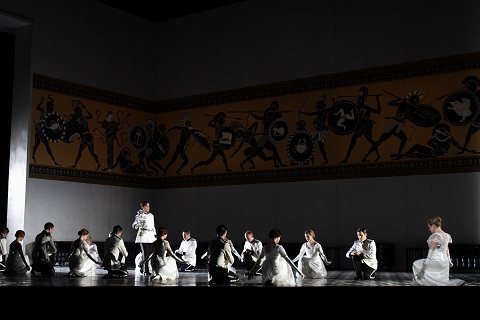 Act 2 takes us to Herr von Faninal’s nouveau riche mansion. He’s an arms-dealer so it’s fitting that this act is all about regiments: of servants and
seamstresses, of dancing duos, of Ochs’ menacing Prussian retainers. The highly ornamented interior of the Marschallin’s mansion is replaced by a more
modern, monochrome palette. There’s an elegant simplicity about the black and white marble floor tiles, while a mustard-toned Grecian frieze tells historic
tales of war and plunder. Not cultural artefacts but two giant cannons – destined for the battlefields of Flanders? – are the centre-piece of Faninal’s
modish interior. When Sophie and Octavian seek respite from the maelstrom of Ochs’ marauding servants, their hiding place – they nestle between the two
grey guns – ominously belies the romance. And, sure enough, Ochs’ nasties return: the choreography (Philippe Giraudeau) of their vicious humiliation of
Sophie is superb. 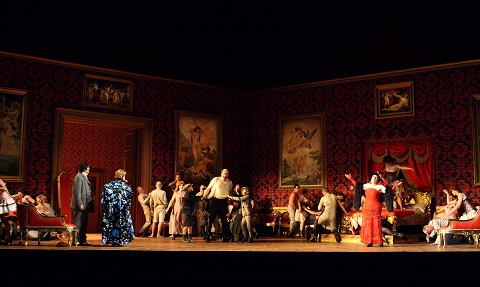 As in Salzburg, Carsen replaces Act 3’s usual rustic inn with a gaudy brothel managed by a male ‘madam’. We begin, like the opening, with a faÁade; for all
the gilt paint and flock wallpaper, the series of doors through which scantily clad women beckon and beguile, recalls the soulless sex-selling of ENO’s
recent Don Giovanni. This is a world of decadent debauchery; at one
wonderfully wry moment, a near-naked man wanders casually and indifferently through the dissipation as Ochs cries in disbelief, ‘Was war denn das?’ (‘What
was that?’). And, Ochs’ temptress, ‘Mariandel’, is no shrinking violet – sporting a blue satin dressing gown atop a cerise corset, she dreams up
indecencies for Ochs that are played out in the neon windows – straight from Amsterdam’s red light district – whose vices push aside the classical
paintings of naked majas, nymphs and Venuses. 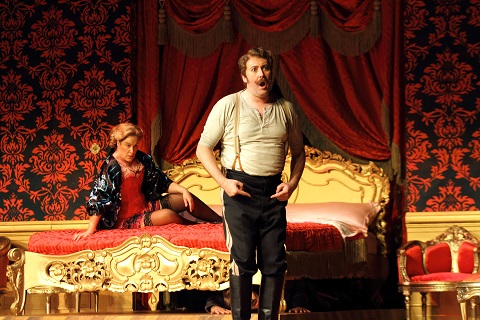 It’s an odd place for the Marschallin to find herself; and the second half of the Act doesn’t quite convince. She should be above such crudeness and
coarseness; and, she knows it. The Murphy bed – confidently flipped down by Mariandel – is again the site of most of the action, as Sophie and Octavian,
bathed in a red glow, canoodle fervently, as the Marschallin graciously, with quiet resignation, accepts that the two youngsters are in love. 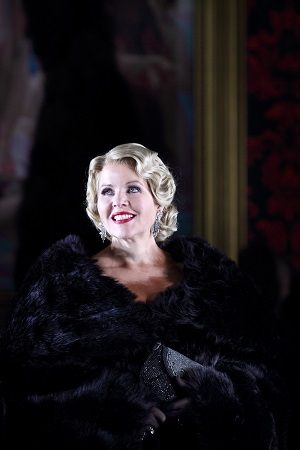 This production was unofficially promoted as Fleming’s London swansong, and there was an autumnal air which straddled real life and theatre. Aided by
Brigitte Reiffenstuel’s gorgeous costumes, Fleming had undeniable stage presence. But, while her bitter-sweet reflections about transience and the
relentlessness of Time avoided a cloying sentimentality, Fleming did not really communicate the Marschallin’s inner life. Her musings needed to be
projected more strongly. She can still glide through a phrase with lovely sweetness and style, and the bloom and lustre are not lost, but they can’t be
sustained. And, Fleming knows this: she saved herself for the big moments, and at times her soprano seemed too reticent to hold Strauss’s ardency. The last
20 minutes of Act 1 saw her tone and timbre recede – the Marschallin’s psychological fragility seemed vocally laid bare. Yet, Fleming showed that she could
still yield the magic: when she gave the silver rose presentation box to her young page for him to take to Octavian, she spun a line of wonderful silky
sheen, a delicious musical anticipation of the formal courtship ritual to come. Conductor Andris Nelsons seemed to quell the orchestral boisterousness and
pace in sensitivity to Fleming (in contrast, in the ensembles he was less judicious and the voices sometimes struggled to compete) and this further lowered
the temperature at times, though during this Act 1 finale Nelsons encouraged some exquisite playing from the woodwind, adding to the sense of
introspection. 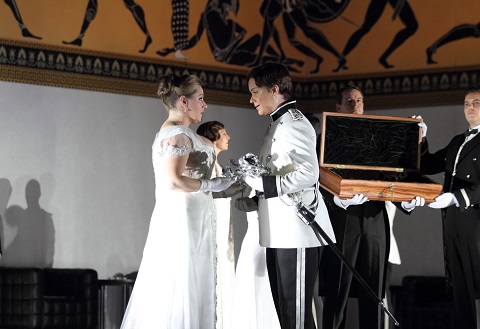 Alice Coote sang the marathon role of Octavian with enormous commitment – some may have found her young Count a touch too uninhibited – and acted well.
Occasionally petulant and over-sensitive to slights to his amour propre, this Octavian was more than a match for Matthew Rose’s menacing Ochs.
Even when upset by Marschallin’s honest prophesying, Octavian summoned his stature, and with a sharp, click of the heels made an authoritative exit, not a
young man to let the public face of masculine command slip. There was a discrepancy, however, between the heaviness and occasional lack of focus of Coote’s
lower register and the rich brightness of her top, and vocally her performance did not feel entirely controlled, but she blended beautifully in the
ensembles and overall this was a persuasive performance.

Sophie Bevan sang her namesake’s soaring phrases with ease, and considerable strength; this Sophie was by turns furiously feisty and – particularly in the
final duet – charmingly innocent. But, Bevan could not offer the slithers of silvery caress that we have come to expect. I longed for ‘Wie himmlische,
nicht irdische’ to linger, just a fraction longer. But, perhaps this was not Bevan’s fault; for though Nelsons often took things fairly steadily, the
presentation of the rose felt far too precipitous. Dressed not head-to-toe in silver, but in military black and white, Octavian fairly charged through the
ranks of ceremonial onlookers. Behind the enchanted young lovers, pairs of dancers swirled in stylised fashion during the duet which should seem to hold
Time still and refute the evidence of the opera, and of life, that the clock’s cannot be stopped. The purple light which bathed the scene was not enough to
transport and translate, and was quickly superseded by the white glare of reality during the ensuing tÍte-‡-tÍte, and later by the lurid green
gleam which accompanied Ochs’ pompous arrival. 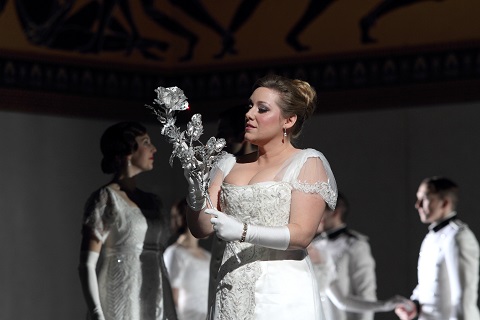 Matthew Rose’s Baron was a revelation. I have never heard Rose sing with such elegance and beauty of tone. Writing in 1942, Strauss recalled the first
performances of Der Rosenkavalier and offered some hints to performers, noting that Ochs was not, as ‘most basses have presented him’, ‘a disgusting vulgar
monster with a repellent mask and proletarian manners’, but rather ‘a rustic beau of thirty-five, who is after all a member of the gentry […] He is at
heart a cad, but outwardly still so presentable that Faninal does not refuse him at first sight.’ Carsen and Rose seem to have heeded the composer’s
advice. Dressed in the stiff military uniform of a Prussian office, this Ochs was no lumbering bucolic buffoon but a threatening lecher, accompanied by a
rifle-toting platoon. Angry at Sophie’s rejection and obvious distaste, Ochs threw her dismissively to the floor. The resonance and charm of Rose’s voice
was an unnerving but rewarding counterfoil to Ochs’ confident menace.

Carsen offers many inventive gestures, quirky details that tickle the imagination but never go too far, and in the secondary roles the cast are
characterful. As the Italian Singer, a matinÈe idol in white suit and hat, Giorgio Berrugi blasted his way through his aria with a little too much bombast,
but did a good impression of Caruso, effusively handing out his latest gramophone recording. The conspiratorial manoeuvring of Annina (Helene Schneiderman)
and Valzacchi (Wolfgang Ablinger-Sperrhacke) is well-choreographed, as is Alasdair Elliot’s spirited abandon as the cross-dressing brothel owner. Jochen
Schmeckenbecher bullied and badgered blusteringly as Faninal, while Scott Connor’s Police Commissioner was a smooth-operator, coolly departing with the
Marschallin at the close – her next inamorato, perhaps. 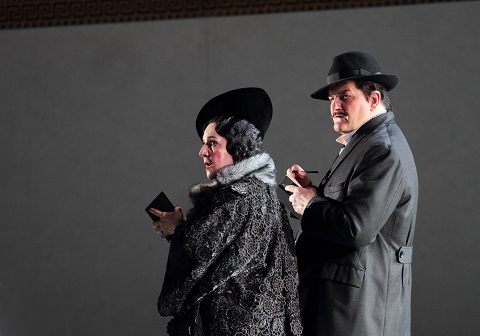 In the pit the Orchestra of the Royal Opera House were fervent but occasionally a little ragged under Nelsons’ baton. Certainly he fired the players up in
the graphically pictorial prelude – indeed, the horns let rip with a little too much vigour at the expense of control, and more punch than blend at times.
But, there was too often a lack of finesse. 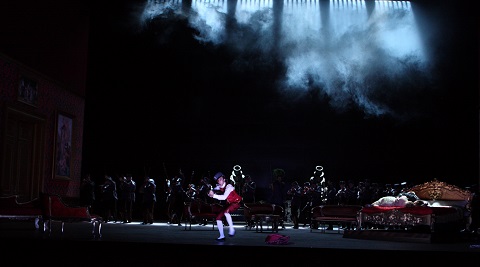 Conventionally, the opera’s whimsical coda consists of a playful dash by the page Mohammed back into the bedroom to search for Sophie’s lost handkerchief.
Instead, Carsen slides back the slanting walls of the garish bawdy house and opens up the expanse of the ROH stage, to reveal a row of ghostly soldiers,
headed by the Feldmarschall and with a green-turbaned Prophet in their midst. Faninal’s cannons, shrouded in mist, point towards the slaughter-grounds of
WW1. The grey platoons fall, in slow motion. The outsized Silver Rose may have sparkled like Swarovski crystal but its dazzle was clearly deceptive. The
frisky pastimes of the bordello are over; it seems that future field manoeuvres offer Octavian only an early grave.