It was worth the wander, though, upon arriving to the venue, the MAST
Chocolate Factory in the Brooklyn Navy Yard. The space was
“wow”-inducing and perfectly shabby chic, lit by the
glow of the neon Brooklyn Brewery sign that indicated where one could get some
craft brew to enjoy with their craft opera.

As the opera began, at least on the surface level, the venue worked well.
The acoustics were a bit cathedral-like, but it allowed the singers and
orchestra to envelope the audience in an eerie wash of sound. The faded brick
wall used as the backdrop of the majority of the opera appropriately hinted at
a crumbling castle, with large brick archways that were likely windows some
time ago. Later in the opera, these arches are lit in a very fine effect that
greatly enhanced the psychological drama of the scene.

Speaking of lighting, it was remarkably well done, used not only to indicate
atmosphere but also to provide projections that illustrated the mental unwind
of Macbeth, or served as flashbacks to emotionally fraught backstory.
Projections can be tricky, as the use of this type of technology can sometimes
err on disruptive rather than enriching, but these were subtle, well designed,
and enhanced the mood of the scenes.

Perhaps I also enjoyed the lighting because it was one of the only aspects
of the opera I was actually able to see fully. There’s partial-view
seating, and then there’s 10-percent view seating, which is what the
majority of the audience outside of the first ten rows was treated to. This
unique space was difficult to work with, certainly, but the addition of a few
platforms onstage would have made the difference between an evening of awe and
an evening of frustration. Multiple major duets and arias occurred with the
singers sitting, kneeling, or lying on the floor, the performers completely
obscured to the majority of the audience.

By the end of the opera, I was barely even watching the stage because it was
a fruitless exercise. The annoyance of the people around me was unmistakable,
with people giving up on their seat and standing on benches to try to get a
glimpse of what was happening.

Of what I could see, many of the directorial decisions were confusing and
detrimental to the heart of the story. There was a montage at the beginning
indicating that Lady Macbeth lost her child before the start of the play,
because it’s not enough that a woman is ruthlessly ambitious because
she’s ruthlessly ambitious—she needs softening by motherhood and
some kind of tragic motivation for her bloodlust. Similarly, not one duet goes
by where Macbeth wasn’t driven mad with lust by Lady Macbeth’s
plans of vengeance (and high notes), performing an awkward from-the-back breast
grab that reduces their deviousness to some kind of sexual kink that’s
activated by murder plans. 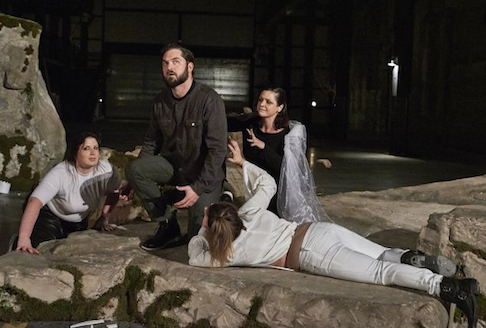 That being said, the musicians made the evening worthwhile and handled some
of the more baffling staging decisions very well. The four principles were very
finely cast, each filling their role naturally with ease—not a small feat
for such vocally and dramatically challenging roles as these.

Craig Irvin as Macbeth has a hugely rich and dark baritone that fills the
space but moves with ease, allowing him for some stunning messa di voce moments
and a real sense of vulnerability lurking beneath the murderous façade.
He’s appropriately brooding but portrays determination to stay fixed to
his murderous path, and neither voice nor dramatics falter through a difficult
three-hour opera. Indeed, his last aria is one of his most stunning moments, a
commendable feat after the demands of the singing of the first three acts.

Elizabeth Baldwin as Lady Macbeth sings a role few would dare with pizazz
and effortlessness. She embodies Lady Macbeth completely, her voice sparkling
through her coloratura passages and her upper range clear and easy. A lingering
high note at the end of her aria in Act II caused awe and delight to ripple
through the audience, yet Baldwin does all of it completely naturally. Her mad
scene was haunting, the final climax echoing through the rafters with unnerving
beauty.

Kevin Thompson (Banco) has excellent control over an enormous instrument,
and gives an exceptional performance with appropriate gravitas. Peter Scott
Drackley as MacDuff brings the performance to an awestruck standstill with his
exquisitely sung Act IV aria. He cuts a fine figure throughout the performance,
with an intense stage presence even in absence of any singing. Ashley Curling
as Dama fills out a small role with a committed performance and gorgeously
blossoming high notes.

The orchestra fared quite well with a full, rounded sound that fills the
space suitably. The coordination between the orchestra and the chorus was the
most noticeable sloppiness of the night, the two regularly getting mismatched
by half a beat, but it may very well have just been the nature of the overly
live performance space. The chorus is small for Verdi but blends nicely,
especially the women’s chorus.

There was something missing in the overall scope of the production, besides
the obvious sightline issues. Perhaps it was an immediacy, or an authenticity,
that as audience members, we hope for in a stripped-down production, especially
when sitting so close to the playing space. Many moments felt quintessentially
“opera-y” and detracted from the thoughtfulness the singers were so
committed to providing.

That being said, Macbeth is an ambitious opera, and for
the excellent singing alone, it’s worth a try. There aren’t many
venues where such fine singing could be heard in this mammoth of a Verdi
composition, and at least you get to go on an adventure to get there.