Set during the height of the Great War, the one-act, through-composed opera directed by Donna Fletcher is based on the beloved Canadian writer’s short story, where an author — Leacock — struggles to pen a Christmas tale while inundated with horrific daily headlines. An all-knowing spirit, Time, and a shell-shocked Father Christmas help him realize that his writing will only help bring joy to a wounded world. 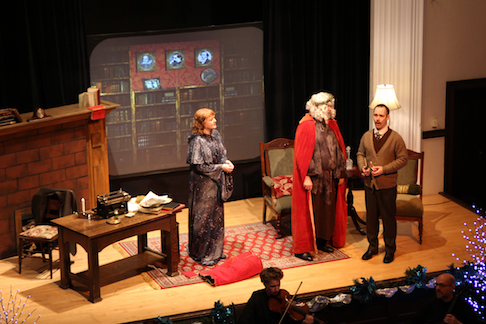 Winnipeg-born, now Toronto-based James McLennan as Leacock, who also recently performed as Bardolfo in Manitoba Opera’s Falstaff first declaims, “The spirit, the beauty, the joy is gone,” with his tenor voice clear and even. He brought requisite angst to his title role, moving through initial despondency to ultimate hope and renewal.

The cast also included two local artists: Rachel Landrecht (and Weisensel’s real-life wife), who sensitively crafted a benevolent Time. Her expressive soprano matched equally by her warm stage presence were immediately apparently during her opening aria, “I am the spirit of Time.”

Winnipeg baritone Matthew Pauls created a shaggy, heart-breaking Father Christmas, who staggers into Leacock’s den with his sack of torn, soaked books and asks for schnapps to blunt his pain. His begging of Time to “Give me back my children” rang with sorrow.

The opera proved at its best during the fuller trios, including its emotional climax. When the ensemble sings, “Children are the future,” greater dramatic impact is created by virtue of close-knit harmonies and vocal counterpoint. Also strong were the more textural sections, including the strings’ pizzicato accompaniment that afforded more opportunity to hear the individual singers in Weisensel’s compact, often densely written orchestrations.

Balance issues proved, at times, challenging, with the two male singers at risk for becoming obfuscated whenever the higher strings came into play. The narrative’s central plot device, a relatively tiny wooden toy horse that gets mended with beeswax, thus becoming a metaphor for hope and healing, did not read as effectively as with a larger prop.

Still, kudos to TLOC for choosing this opera as one of its two seasonal offerings. And its proud, ongoing support of homegrown talent continues to be its own gift to the city’s lively arts community, not just during Yuletide but indeed, all year long.