While the majority of well-known operas probably have a cast of seven or so major roles, the grand operas of the nineteenth century swelled the ranks
considerably. And, there are no limits. Jonathan Dove’s 2015 Monster in the Maze – jointly commissioned by the London Symphony Orchestra, the
Berliner Philharmoniker and the Festival d’Aix-en-Provence – involved 350 singers: children, teenagers and adults; amateurs and professionals.

Opera comes in all shapes and sizes, as do the venues where it has been performed: from the Gonzaga’s ducal palace that witnessed the first performance of
Monteverdi’s Orfeo in 1607 to the the Bayreuth Festspielhaus which opened in 1876 with three performances of the complete Ring cycle.
Nowadays one is just as likely to see opera performed in amulti-story car-park, a disused warehouse, a North London pub, or even on the beach.

Haydn Rawstron’s opera company, Narropera, have reinvented the genre once again. Narropera pares down the operatic experience to its essentials.
There are just three performers, the Narropera Trio. There is a singer (Rawstron’s wife, the versatile soprano, Dorothee Jansen, whose career has
taken her to venues such as La Scala, Bayreuth, and the Wigmore Hall) who represents several different characters. Then, a violinist (or rather, one of
three violinists, depending on where in the world the company are performing) weaves the vocal lines together and or adopts the vocal lines of an actual
character of the story. These two are joined by a pianist (Rawstron himself), who both provides the musical structure and serves as a narrator, filling in
the ‘story’ between the singer’s arias.

The emphasis, as one might imagine from the company’s name, is on narrative. But, while the opera may be ‘pared down’ to 90 minutes or so of uninterrupted
story-telling, there is no lessening of the musical quality or experience. The intimacy of the chamber form and context creates an immediacy and
directness. Knowledgeable listeners may hear afresh and discover new details; those unfamiliar with the work, or even new to opera itself, will be beguiled
by a story clearly told through words and music.

Rawstron, a New Zealander, read music and was organ scholar at Christ Church, Oxford, before working at the Oldenburg State Theatre and developing a career
in opera in Germany. Later, he established a successful agency for opera singers, conductors and stage directors, developing and managing the international
careers of performers such as Anne Schwanewilms, Katarina Dalayman, Hillevi Martinpelto, Kathleen Kuhlmann, Birgitta Svenden, Renate Behle, Robert Gambill,
Rainer Trost, Klaus Florian Vogt, Benjamin Bruns, Eike Wilm Schulte, Kristinn Sigmundsson, Willy Decker, Andreas Homoki, Gˆran J‰rvefelt, Heinz Wallberg,
Arnold ÷stman, among others. When he retired in 2009, Rawstron wished to return to performing. As he puts, it ‘Out of that desire has evolved narropera’. 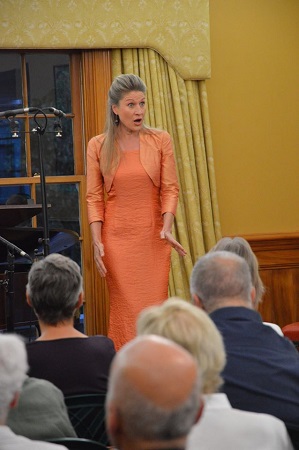 Rawstron explains the concept of narropera: ‘Whereas opera is understandably inflexible given the numerous forces that require coordinating, narropera’s
chamber-music trio-presentation and its story-telling/singing interaction allow for considerable flexibility and creativity, not only in the preparation of
the individual narroperas, but also in terms of a certain improvisation in actual performance. […] It is not necessary for the public to bring any
special knowledge to narropera performances, neither of the opera being performed nor of opera in general […] the opera fan and the opera novice share in
the same clarity and at the end of a narropera performance there is a great deal less difference between that which the fan and the novice respectively
knows about the opera they have just experienced, and frankly that is just how it should be.’ This short interview confirms Rawstron’s creative spirit and commitment to the genre.

The company was created in response to the 2010-11 Canterbury earthquakes which damaged or destroyed many of the region’s cultural and performance venues,
leaving the area without theatre, opera house or concert hall. Initially planned as a ‘stop-gap entertainment’, the first narropera – an adaptation of
Mozart’s Le nozze di Figaro – was performed at the Old Tai Tapu Road-based Lansdown House near Christchurch in early 2013, by Rawstron, Jansen and
violinist Jan van den Berg. Narropera has out-lived those early intentions, however, and Rawstron and Jansen have not only established an annual festival
at Lansdown but have also exported the concept to Germany, England and the Isle of Man.

The current format evolved gradually during the three years leading to that first narropera performance. First, Rawstron mounted a series of
programmes, entitled Caccini to Puccini, which charted four centuries of Italian bel canto. Each programme presented arias from twelve different
Italian composers metaphorically ‘holding hands’ through the centuries, and each aria programme came with a narration, setting the arias in their
historical context, with a literal text translation preceding each aria. 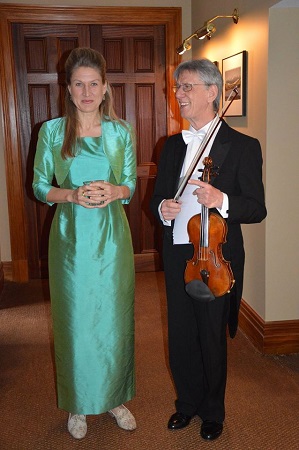 The popularity of these performances encouraged Rawstron to expand the format to encompass the presentation of whole operas. Eighteenth-century Italian
works proved well-suited to the concept, and Handel and Mozart have been the mainstay of the company’s repertory. Handel’s aria cycle, Neun deutsche Arien, setting poems by B. H. Brockes, followed that first Figaro. Since then, the composer’s Giulio Cesare and a
‘medley’ – wryly entitled Handeling the Old Testament – presenting ten arias from five of Handel’s oratorios (Esther, Athalia, Saul, Samson and Jephtha) with accompanying biblical stories to link the arias, have followed.

Mozart has been represented by La clemenza di Tito, Don Giovanni and, most recently in 2016, CosÏ van tutte. Moreover, Rawstron
comments that once created, the narroperas ‘evolve’ in subsequent performances: ‘For instance, we have added three additional pieces to the overall musical
component of Don Giovanni, one extra piece in Figaro and made various changes to the narrative texts of both.’ 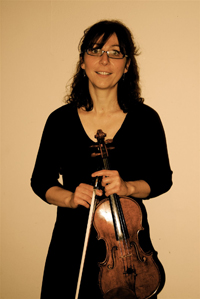 Floriane Peycelon who has recently joined the Narropera Trio as the company’s UK-based violinist.

A review in the Manx Independent of the company’s CosÏ at Peel’s Centenary Centre in October 2016, by Dr Peter Litman, the
director of music at Peel Cathedral, captures the flavour of a Narropera performance: ‘Rawstron’s ability to weave the complex tapestry of plot
with the music of Mozart was quite mesmerising. Soprano Dorothee Jansen displayed both a beauty and dexterity, effortlessly moving between head and chest
voice, and playing out her various roles through compelling facial expression. Having an intimate feel -rather like a soiree in a grand house in a lost era
I was surprised by how much Jansen brought the plot of the opera to life drawing the audience into the story, even though she was singing in Italian. […]
Joining the singer and pianist, Hanns Heinz Odenthal’s silvery violin complemented the voice like lace icing, and gave us a real sense of chamber
performance. […] The diverse talents of Rawstron as a dramatic reader provided not only entertainment but gave real depth and accessibility to the plot
during the narrations. He presented himself as impresario and performer and we were amazed at the fluidity and ease with which he could move from wistful
storytelling to the piano.’

There have already been four narropera performances in the Isle of Man, nearly twenty performances in the UK and three in Germany (includingLe nozze di Figaro at the festival Musica Bayreuth), while the remaining performances have been in New Zealand, home to Lansdown Summer, an indoor festival of narropera presented in a magical heritage setting in rural
Christchurch. In October 2016 Narropera gave its 50th performance since Rawstron and Jansen invented the new genre, at Eastwell Manor
near Ashford, in Kent.

The 4th Narropera Festival takes place at Lansdown in February/March 2017, where the company will perform a new narropera
derived from Weber’s Der Freisch¸tz. It will have its UK premiere in spring 2017.