Fascinated, I witnessed the vastly different, but equally persuasive,
styles of Thielemann’s slight aggression in his artistically
authoritarian ways as opposed to Rattle’s inviting and democratically
inclusive approach.

Kremer appeared to have a Herculean task in Gubaidulina’s enchanting
cosmos of extremes. When you see her for the first time, you cannot help but be
surprised by her tiny frame as the vessel for such fiery music. She channels
her coarse, instinctive energy through an uncompromising intellectual curiosity
that makes her compositons sound extreme, yet familiarly approachable. 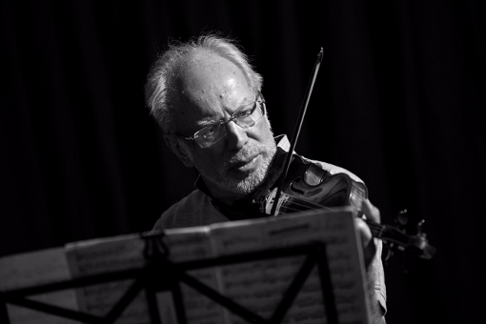 Sophie Ann Mutter and Rattle premiered the work at the Lucerne Festival ten
years ago. Then, it was perceived as a nurturing work, but tonight Kremer
infused it with an inexhaustible rawness emanating from his aged musicality.
Highly dramatic and elaborate, it was not what I expected from the legendary
violinist. In fact, tonight’s rendition would have suited the horrors of
humanity of a Stanley Kubrick film. Absolutely thrilling!

As if his life depended on it, Mr. Kremer turned into a technical wizard on
the violin. The Latvian soloist thrived in Gubaidulina’s states of
frenzy, as he crevassed up and down her icy hot spikes. He had few moments
where he could catch his breath. In an exhilarating crescendo, passion flowed
as Emmanuel Pahud quarrelled with Kremer back and forth on the flute, producing
one of the orchestral highlights of the evening. During the cadenza Kremer
sustained razor sharp focus. He turned his play into a thirty-minute sprint,
rather than a steady marathon.

Containing the violent outbursts from the percussion and the horrifyingly
shrieking edges yelped by the trombones, Thielemann kept clear tempi for
Gubaidulina. His tight control created a serrated edge to the Berliner sound.
In a disorienting novelty, reverberating overtones seemed to dampen each other
creating unusual pockets of deafness.

In Bruckner, Thielemann let himself shine as he disclosed his inner-artistic
exuberance. The Mass No. 3 in F minor for soloists, choir, and organ
was performed with Paul Hawkshaw’s 2005 edition. It includes Robert
Haas’s sonorous organ passages. The brilliance and depth of the Berliner
strings burned in the “Credo” as they repeated their motifs, a
typical building block of Bruckner’s industrialism. Christian Schmitt
guested on the organ, his vibrations grounded the Mass, adding heavy depths
underneath the light tone of the orchestra.

In the beginning, the Bayreuth soprano Anne Schwanewilms seemed to phone in
her performance. She did not hit her stride until the Benedictus, and
ultimately proved her worth and then some with the final verse “dona
nobis pacem”. Michael Schade’s tenor voice sounded sturdy and
decent, but he just did not seem too involved.

On the other hand, Franz-Joseph Selig’s bass charmed with character as
an ameliorating contrast to Schade’s missing. And one must not forget,
Wiebke Lehmkuhl’s alto role! With her tree trunk of a voice, she grounded
Bruckner with an earthy gravitas. When she sang, she became a backbone to the
voices, connecting all the branches, bringing about a determined sense of
cohesion.

Above all, the Rundfunkchor Berlin prepared by Gijs Leenaars, proved vital.
As one breathing organism of Bruckner’s vocal brilliance, this tremendous
choir blew me away. In the Gloria and Credo their voices induced a thrilling
current in Thielemann’s momentum. Fortissimo and pianissimo, these
singers provoked skin crawling effects over my arms throughout the evening.

Now without baton and much more instinctual, Thielemann basked Bruckner in
glory. He conducted with both hands free. While leaning back like a painter
observing his work in progress, his other hand curved slight nuances on his
orchestral canvas. He was clearly more at home in Bruckner than
Gubaidulina.

With all the noise from Bayreuth over Thielemann’s reign, the
conductor came across much less stolid than I had anticipated. Although in his
violently incisive gestures I recognised an authoritarian, I also detected a
surprisingly warm heartedness that effectively permeated through the BPO.
Thielemann elucidated the many virtues of the BPO, especially from the
brilliant brass in the Gloria that might as well have reflected the splendour
at Heaven’s Gate.