No strange German regietheater here, but a decent and traditional take on
Puccini’s classic. Eun Sun Kim brought out all the colours and exotic
spices in Puccini’s score. The Berliner Staatskapelle was in top shape.
Clearly, Puccini is part of its DNA.

At the end of Act II, “Un bel dì vedremo” by Alexei
Voulgaridou’s vulnerable Cio-Cio-San did not have the maximal impact of
this aria’s potential. However in her duet with Katherina
Kammerloher’s Suzuki, “Or vienmi ad adorner”, they churned
out one of the evening’s touching highlights; quite moving and greated
with the loudest bravi. 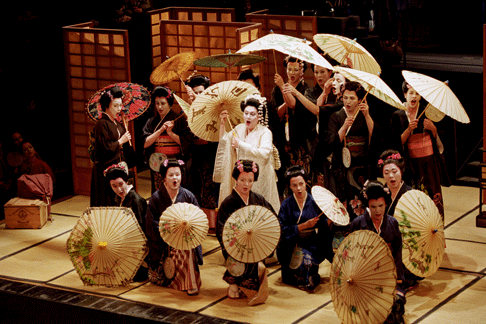 Act III overflowed with melodrama. Pinkerton returns with his wife, about to
take his son away from his mother. Here the pace sagged a bit, and the audience
became audibly restless. But Dmytro Popov as Pinkerton impressed conveying an
American naivete, convinced of his own good intentions in his sweetly sung
“Addio, fiorito asil”. He produced great vocal chemistry with
Voulgaridou, especially in “Bimba, Bimba, non piangere”, the famous
love duet that closes Act I. Though she did not have the emotional intensity in
her acting, instead her vocal skills prevailed with feeling.

I was also impressed by the strong supporting cast. Kammerloher charged
Suzuki with highly neurotic presentiments. Her fearful vibrato added a
foreshadowing spell, her voice rich and commanding, alarmed by wisdom and
concern.

Alfredo Daza as Sharpless stole the spotlight with the glowing humanity in
his comforting voice. Through his skilled acting chops, he exude the sad
realisation of the bigger picture and eventual tragic ending. He gave much
heart to his scenes. Daza’s vocal humanity worked equally effective in
his comedic timing. Comical moments also came from cultural caricature
Yamadori. Sung intentionally off-putting and sycophantic by Vincenzo Neri. His
foolishness coaxed some downplayed snickering from the audience.

Eun Sun Kim, for whom I have had sympathy ever since I saw her try so hard,
but to no avail, conduct in the impossible lateral orchestral set-up next to
the stage in the production of Cologne’s recent Nazi-oriented Lucia
di Lammermoor. Tonight, she did not have to deal with any odd displacement
of the orchestra. She kept the brilliance and momentum in Puccini’s score
thrilling, while she made the soloists create several great emotional nuances.
She cultivated the mood of American patriotism effectively, but also reflected
the romantic anguish and despair at Cio-Cio-San’s death.

Swooning in its romance under a the staged starry night, the opera’s
romantic mood continued as you left the Schiller Theater. The many young
couples that I observed leaving, seemed particularly inspired by the
performance, as their giddy displays of affection had no bounds. This
production returns in March, and I highly recommend it to any opera newbie or
just plain old traditionalists.