Under the neon-glare of laboratory strip-lights, the scientists and literary archeologists rout through the relics, scrape away palimpsests, shatter the printing presses, and uncover a shocking tale of violence, sex, suicide and cannibalism. ‘Strip the cities of brick,’ they cry; ‘Cancel all flights from the international airport.’ Yet, despite its ‘distance’ – both historical and aesthetic – this disturbing juxtaposition of innocence and monstrosity unsettles and seeps into our modern consciousness, like ink staining parchment.

Crimp’s spare, harrowing, unsettling libretto – replete with deliberate
artifice – adapts a medieval Occitan legend about the Catalan troubadour
Guillem de Cabestany, a tale previously treated by such diverse authors as
Boccaccio and Ezra Pound. Cabestany was the lover of the wife of Raimon of
Castell RossellÛ; when their adulterous treachery was discovered, Cabestany
was murdered and his heart was cooked and fed to his beloved
Seremonda. On learning of the derivation of her feast, she threw herself
from the window to her death.

Ironically, while the words and images which are etched by the Boy onto
vellum and into AgnËs’ spirit are indelible, and their effects irrevocable
and permanent, all else in Benjamin’s and Crimp’s shifting world is
permeable and fluid – like ink which never dries. Time and space ebb and
flow: the Boy has a vision of the future, in which ‘this wood and this
light’ will be ‘cut through by eight lanes of poured concrete’. The
archivists become Angels as the opera fuses modern and medieval, sacred and
secular; interior and external worlds amalgamate – literally, as a forest
springs up within the Protector’s medieval hall. Crimp’s mannered elegance
sits alongside mundane pragmatism – reference to car parks, shopping malls
puncture the poetic conceits.

Similarly, narrative leaks into the dramatic. Characters serve as
third-person commentators – ‘said the Boy’ – or explain their actions, ‘The Boy takes from his satchel an illuminated page.’ So
compelling is the story that the archival researchers resurrect that they
are sucked into its unfolding events, finding themselves serving as
supernumeraries, rearranging or removing props, or finding a costume.

Vicki Mortimer’s two-tiered set compartmentalises various rooms and time
zones, but these periods and locations oscillate with quasi-hallucinatory
equivocation; they converge but never quite coalesce. Jon Clark’s vivid
lighting juxtaposes the earthiness of the medieval world – all warm ochres
and browns – against the monochrome coolness of the present.

Mortimer and director Katie Mitchell offer many striking images: not least,
AgnËs’ slow ascent of the white stairwell in the opera’s closing moments is
impressed in my mind. There is a lot of personnel movement – or perhaps one
should say ritualised slow motion; and the purpose of the stage business
within and betwixt the compartmentalised chambers is not always clear, and
can be distracting. It is therefore sometimes hard work to connect the
musical discourse to the theatrical niceties.

Composer George Benjamin conducts this London revival. The words most
commonly used to describe Benjamin’s music include ‘meticulous’,
‘fastidious’, ‘exquisite’, but all sound far too precious and passionless
for a score which has sensuousness at its core. Benjamin has given us a
vibrant, glowing musical illumination, albeit one undercut by dark
undertones: an aural image which gleams with the lucidity and brightness of
a medieval Book of Hours, and as dense a coloristic canvas as an
Impressionist masterpiece. Even more impressively and wondrously, the
details cohere to form a grand dramatic sweep.

Not surprisingly, Benjamin’s conducting meets the requirements for both
technical precision and expressive spontaneity. The score abounds with
complex polyrhythmic interplay, yet despite the strict rein that is needed
to coordinate such complexities, Benjamin still managed to create an
impression of an impulsive sonic response to, and commentary on, the
unfolding story. The deliberate artifices of the libretto never weaken the
ever-mounting tension which, like an insidious inflammable liquid, seeps
into the dramatic canvass until a conflagration is inevitable. 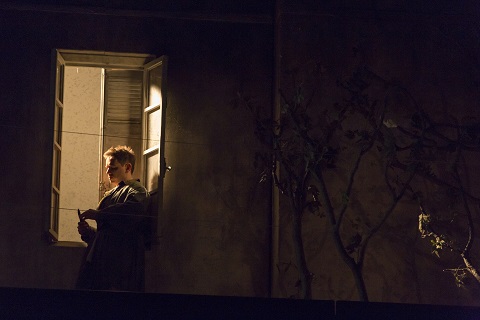 Delicacy and tempestuousness are juxtaposed. The brass chords of the
opening bars cast a prophetic look at the drama’s conclusion, and though
the soloists’ melodies – lyrical, naturalistic settings of the English text
– are sensitively supported by carefully crafted instrumental groupings
(and bass viol, verrophone and steel drums make their mark) the climactic
moments appropriately unleash the full force of the ensemble. There is
‘poetry’ in Benjamin’s harmonic and orchestral medium: he is profoundly
concerned with the essential implications and inferences of the harmonic
and timbral qualities of his music in terms of their expressive, dramatic,
ethical, and communicative meaning and effect. 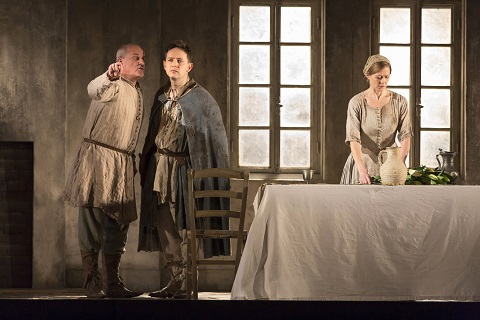 What I found most striking and stirring was that while Benjamin’s music –
utterly absorbing and strangely disorientating – seldom possesses a strong
pulse there is undoubtedly unerring forward momentum: towards an
unstoppable tragedy but also lulling the listener towards catharsis. I
felt as if I were floating between worlds, though the natural speech
rhythms of the vocal lines provide some sort of anchor.

The cast of five included several of the opera’s role-creators. Christopher
Purves was a startlingly compelling Protector, by turns aggressively
belligerent and bunglingly inept; both mellifluous of voice and
daringly forthright as the role lurched towards the upper reaches of the
baritonal head-voice. Purves’ diction was superb: he blustered with bold
machismo and blundered with anguished disquiet. He created a figure who was
absolutely terrifying in both his lack of self-awareness and his
compensatory vindictiveness.

Barbara Hannigan was wayward and headstrong as AgnËs. The
luminosity of her soprano implied both naivety and nascent passion; her
vocal line conveyed and impaled emotion. Hannigan’s impassioned commitment
to the final scenes was breath-taking. Informed of her cannibalistic
indulgence, she declared with triumphant vigour and ascent: ‘Nothing I ever
eat, nothing I drink, will ever take the taste of that boy’s heart out of
this body.’ But, troublingly, the listener was simultaneously assaulted by
the gastric cogitations of the orchestra – a panoply of sliding, burbling
digestive onomatopoeia. 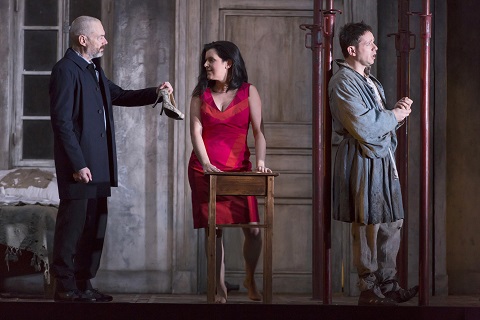 With Victoria Simmonds and Mark Padmore taking the roles of the Angel
2/Marie and Angel 3/John respectively, the vocal feast was similarly rich.
But, it was Iestyn Davies, who sang the role of the Angel/Boy in Munich in
2013, who brought an utterly winning vocal contrariness to this production.
It is hard to imagine a more perfect fit of voice and role. Davies’ pure
tone suggests a figure who is untouchable and celestial but, paradoxically,
the beauty of his voice and the directness of its communication are
bewitchingly erotic. There was a magical glow to the duets between AgnËs
and the Boy, which was utterly compelling.

When AgnËs has jumped to her death, the Angel – the murdered Boy – explains
that he has transfixed her image in an eternal illumination. We, too, are
left with a timeless message, or question. Since its premiere at the
Aix-en-Provence Festival in 2012, Written on Skin has travelled to
London, Amsterdam, Toulouse, Munich, Vienna and

, accumulating five-star reviews along the way, and working its way
unchallenged into the modern operatic canon.

Written on Skin
might have been named Etched in Blood; it is chillingly refined and brutal.
It carves its way disturbingly into one’s mind and memory, and is not
easily – or willingly – eradicated.