The exact proportions of the blend in any given staging would of course vary
according to the character of the work in question. Le comte Ory,
whatever else it is, is frivolous entertainment, and received a hyper-frivolous
staging, with doll-like puppets gamboling in a toy-store window setting.
Nabucco, whatever else it is, is achingly serious drama, and got a
suitably solemn approach.

La traviata is quite a different matter. There are literally dozens
of productions available for remounting, most of them fairly bland, set up to
frame conventional notions about Verdi’s pathbreaking music drama, with
thought, if employed at all, goes into decorative details

For his Traviata, Lang chose to revive Peter Konwitschny’s
2011 Graz staging, which was quickly taken up at the English National Opera and
just as quickly revived there. 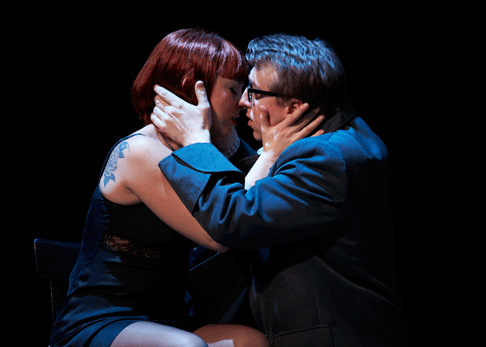 Seeing the Seattle Opera staging beside the Graz original on video, makes it
perfectly clear that Konwitschny, as proudly high-handed in his approach the
the operatic classics as any director living, requires the most meticulous
adherence to his own instructions. I don’t think I saw a moment or
movement on the McCaw Hall stage which varied by a hair from what’s to be
seen in the live video.

It was nevertheless revelatory seeing this stereotyped staging in full.
Choices which once were puzzling to me now seem explicable, moments I thought I
grasped now seemed odder when viewed in context.

The most successful directorial intervention is playing all four scenes
without a break. Traviata is a remarkably short opera considering the
dramatic range covered, and if a soprano is willing to submit herself to such
unrelenting exertions, the audience’s hour and fifty minutes in their
seats are amply recompensed in the continuing tension of the drama.

But two other major interventions damage the overall impression badly, which
suffers badly from the unshifting point of view of a theater seat. Konwitschny
sees Alfredo Germont as a . . . a what? A dweeb? A geek? Not, externally at
least, a passionately romantic nature: This Alfredo wears cardigan sweaters,
horn-rimmed spectacles, in never seen without a book even while being
introduced to a famous courtesan whom he has long worshiped from afar. Franco
Corelli would have been hard-put to overcome this handicap; and Joshua Dennis
is too honorable to work against it. 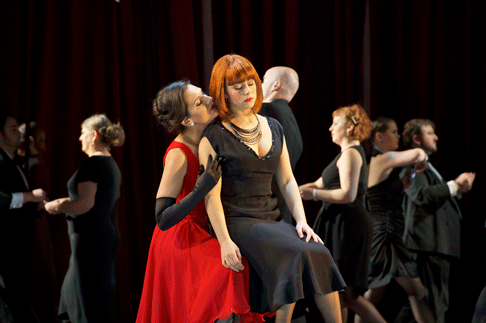 The second interventions begins promisingly but veers fatally off-course.
Speaking about Traviata as a work, Aidan Lang rightly identifies the first
scene of act two as the dramatic and emotional heart of the opera and Germont
père as the most crucial character. Where, on the spectrum from paternal
love to cold calculation, sincere appeal to relentless manipulation, does his
heart lie?

Konwitschny’s approach renders him an utter enigma. Weston Hunt uses a
warm, enveloping voice and his imposing physical bulk to present a classic
troubled father. Even the director’s decision to bring Alfredo’s
(much) younger sister on stage to reinforce the father’s appeal to the
honor of his family (and loss to her marital prospects) seems defensible.

Then, in one gesture, the who picture collapses. Pestered by the child while
making a point, Germont strikes her savagely across the face, knocking her to
the floor. Then, while Violetta (and the audience) stare at him in horror,
suavely continues his appeal.

The violence recurs, with as little motivation and effect as before.
Violetta cuddles the child protectively but hands her passively back to Germont
in agreeing to his terms for abandoning Alfredo. The contradiction created by
Germont’s action engulfs her as well. To the end of the scene nothing
that happens makes sense. 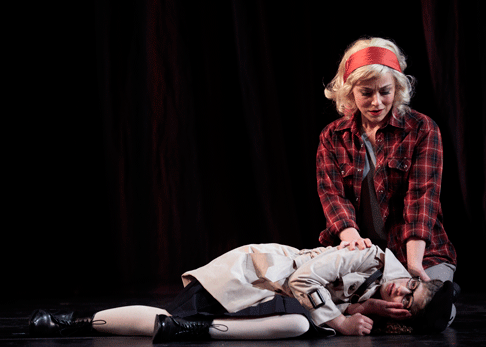 From this point onward oddity and bizarrerie intrude more and more deeply.
The movement of the chorus in the first scene at Violetta’s party was
stylized to the point of parody; in the second scene of act twotheir behavior
goes beyond the parodic as they first constantly parade across the stage during
Alfredo’s encounter with Violetta before collapsing to the floor in a
heap and crawling off the stage on their bellies during the celestial prelude
to act three.

After this, one barely asks why Doctor Duphol is wearing a party hat covered
with green glitter when he comes to attend Violetta. Cause and effect are no
longer a consideration. For me, the little has was the last straw. I suddenly
saw the show as a conventional, even routine walk through of a masterpiece, the
spare stand-and-deliver blocking dotted with conspicuous peculiarities to
distract from the lack of contact between the players and lack of development
within them.

The fearless soprano Marliss Petersen, in almost constant close-up, punches
right though this inertia in the Graz video. On the McCaw stage, bare and
draped in interminable red, Corinne Winters can’t escape the chill of the
void, the clichés of her costuming (black Lulu wig in scene one, Doris
Day ditto in scene 2 . . .), the hollowness of the dramaturgy. Her effort is
nonetheless heroic. I hope that she is better supported by the new production
of Jen?fa here which opens in late February. With little emotion and
next to no serious thought, this Traviata doesn’t meet the
ambitions declared for the company by its director and board.