Both earlier productions designed by his long time operatic scenic collaborator Margarita Palli.
This Luca Ronconi Falstaff production was first seen in Bari in 2013 (then in Naples and Florence). It is designed by Tiziano Santi, normally a collaborator in Ronconi’s non-operatic theater projects. Santi’s set is nothing more than walls of blank canvases, including the show curtain itself, against which walls Verdi’s gigantic comedy takes place. It is minimalist staging, the scenes traveling presentationally back and forth across downstage. Finally it was a purely verbal Falstaff, staged so the we heard every word uttered both by the voice on the stage and by Verdi’s orchestra in the pit. And we clearly saw every word lived by the opera’s protagonists.
29 year-old, wunderkind conductor Andrea Battistoni was in the pit engaging the hyper alive Genoa orchestra with the stage, magnifying the “Falstaff immenso! enorme Falstaff!” announced by Sir John Falstaff into monumental proportion, driving the punctuating cadences to every last one of Verdi’s intended exclamation points, delighting in the sweet, fleeting encounters of the young lovers, encouraging the female chatter and indulging the Italian male cuckold fetish to its absolute maximum. It was a conducting tour de force, sparks still flying from the tip of his baton (stick still in-hand) at his stage bow. 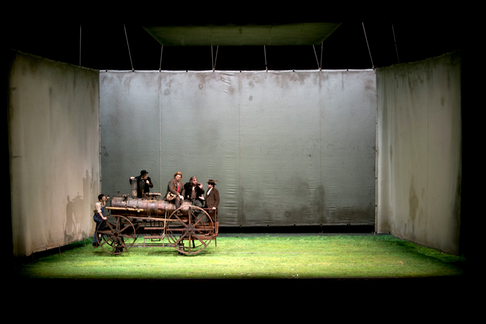 Ford’s tractor, Fenton extreme left, Ford in hat with feather extreme right
The Genoa cast of January 28 found a distinctly Mediterranean bias for Ronconi’s simple English farm life — The Italiano Alberto Mastromarino as Falstaff, Brazilian born, Spain finished baritone Rodrigo Esteves as Ford, Serbian born and trained Nenad ?i?a as Fenton, Livorno born Valentina Boi as Alice. Plus two Russian born artists who have become Italian artists — Anastasia Boldyreva as Dame Quickly and Daria Kovalenko as Nanetta. Add to these the bevy of Italian male buffo character roles that were plumbed to perfection in the inimitable Italian buffo tradition.
Interestingly this was the second cast, singing two of the five performances, but you could not imagine or wish for more finished performances. Sir John Falstaff was of believable girth, of quick spirit and of powerful voice. You could, for moments from time to time, even believe that this Falstaff was an honest predator and not simply a caricature of delusion. He quibbled with Ford as an equal, triggering Rodrigo Estives, a very smart-looking, too handsome farmer, to go-off-the-deep-end in forceful hyper-baritonal terms. Note that the Ford disguise was dark glasses and, wittily, a pillow stuffed under his jacket to add girth. Fenton was dressed in bibbed denim trousers, the classic piece-of-straw chewin’ farm hand, tenor Nenad ?i?a’s “Dal labro il canto estasiato vola” exquisitely wrought in tenorial flight.
The Alice Ford of Valentina Boi was ever so slightly maternal, her ample lyric voice buoying the fracas of female voices in Ronconi’s barnyard (sketched by nothing more than four geese in a line), pedaling on and off on fantastical antique bicycles with her daughter, Nanetta, sung by Daria Kovalenko in her little-girl operetta-like voice. Anastasia Boldyreva found the richness of tone to vocally convey Verdi’s satiric Quickly, yet it was the voice of a real woman (and gratefully not a cameo appearance by a famous over-the-hill diva). Meg Page did what she always does — stayed out of the way except when needed. 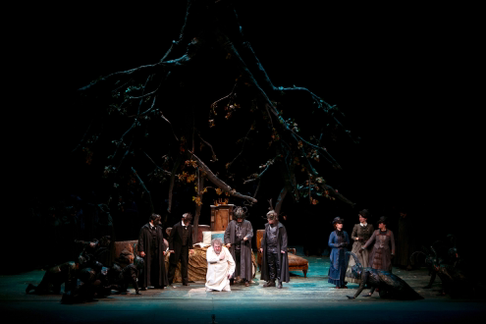 The upside down oak tree
It was perfect theater, well until Act III when the Herne, the Hunter’s Oak inexpicably flew in upside down and dramatically the carefully entwined threads lost direction. Focus was further diluted by Nanetta’s anemic delivery of “Sul fil d’un soffio etesio.” It is possible that the slight musical insecurities inherent to a second cast noticed throughout the evening became more pronounced. We were left musically and dramatically adrift until finally the 10 protagonists walked across the stage apron to sit on the lip and deliver Falstaff’s immense and enormous fugue “Tutto nel mondo Ë burla, l’uomo Ë nato burlone” directly under the conductor’s baton. It was indeed Verdi’s 10 voiced fugal joke as never before, his response maybe to Wagner’s 50 voiced Meistersinger riot and certainly a bit of well-meaning one-upmanship to the great ensembles of Rossini himself.
Michael Milenski