ENO had put together a strong cast, at the London Coliseum 9 February 2017,
which combined youth and experience. Frederic and Mabel were played by ENO
Harewood Artists

and Soraya Mafi
with Ashley Riches, a
former member of the Royal Opera’s Jette Parker Programme, as the Pirate
King, plus Johnny Herford as
Samuel, Katie Coventry
as Edith,

as Isabel. Experience was represented by

and Lucy Schaufer
returning to the roles of the Major General and Ruth, and Sir John Tomlinson
who sang the role of the Sergeant of the Police. The revival director was

, lighting by Paul Pyant
revived by Andrew Cutbush and choreography by

Leigh’s production had the virtue that it had no particular axe to grind,
and there was no re-writing or updating. It was not presented straight,
evidently when Gilbert directed the piece he wanted the pirates to be
serious in the intent and the comedy came from the unlikely combination of
events; Gilbert’s plots work from such unlikely juxtapositions. Leigh’s
pirates had a distinctly theatrical element to them, certainly larger than
life and Chitty’s designs, with the areas of plain flat colours in the sets
and cut-outs, rather emphasised the cartoon nature of the piece.

The opening scene had a vivid blue drop, with a cut-out revealing a
vermilion ship’s deck, populated by some very colourful pirates. Ashley
Riches’s pirate king, wearing an elaborate outfit which would have made
Johnny Depp’s Jack Sparrow proud, was wonderfully theatrical and Riches was
almost unrecognisable under a forest of facial hair. With his height he had
the physique du role, and combined command with charm, though perhaps he
was just a little too nice veering towards the picture-book rather than
real pirate. He was ably supported by Johnny Herford’s Samuel; clearly
Herford had been watching Hollywood films. Slightly apart but still
dutifully a pirate was David Webb’s Frederick, looking rather dashing and
displaying a fine lyric tenor voice. Lucy Schaufer’s Ruth followed him
round gamely, creating comedy by really taking the character seriously.

Part of the reason for the enduring popularity of G&S with amateur and
semi-professional companies is that the operas give these sort of
opportunities for ensembles, with each group having a carefully delineated
sense of character. So in addition to pirates, here we had a delightful
chorus of Major-General Stanley’s daughters, led by the pert Mabel of
Soraya Mafi and supported by Katie Coventry, Angharad Lyddon and Lydia
Marchione who stepped out of the ensemble with deft charm. And in the
second act of course, the timid Policemen led with brilliant comic timing
by Sir John Tomlinson.

The second act also showed another reason why people love these operas,
after a toe-tapping chorus from the policemen, the pirates enter with
another memorable chorus and then with a deft hand Sullivan puts the two
together, to create a truly memorable ensemble. The production responded to
this with a wonderful image. The policemen retreated behind the flat, which
had a circular cut out, and when they made their contributions to the
ensemble heads popped up from all around the circle in a surreal manner. 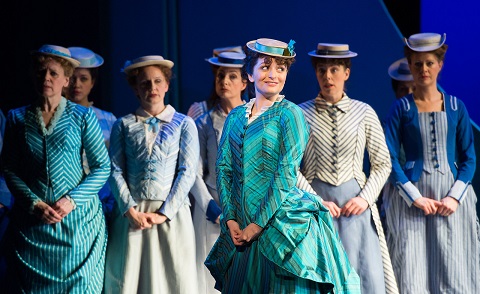 This was the charm of the production, the way Leigh and Tipple had
re-thought the staging so that it provided a series of striking images
which matched Gilbert’s proto Theatre of the Absurd. We were encouraged to
revel in the unlikely juxtapositions, rather than trying to make them
relevant or provide social comment. I have to confess, I rather wondered
what audiences in the co-producing cities thought as the production was
shared with Les Theatres de la Ville de Luxembourg and the Saarlandische
Staatstheater Saarbrucken.

The London Coliseum is frankly rather too big for Gilbert and Sullivan, an
ideal performance requires a more intimate communicability than is possible
in the space. But this is the sort of piece which English National Opera
should be including in its repertoire, and I was impressed with the way the
cast all worked very hard to make the piece work. The sung sections had
surtitles, the dialogue not. Diction varied from the creditable to the
superb, with John Tomlinson and Lucy Schaufer really demonstrating peerless
communicating skills. 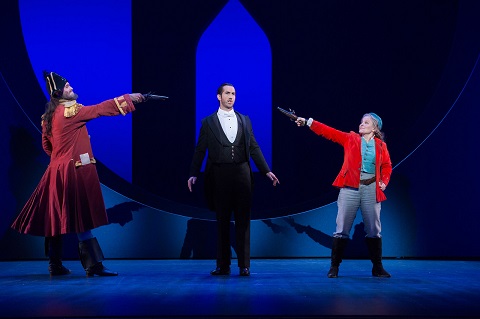 Musically this was a very strong performance. It helps that Sullivan’s set
piece send up the various operas of the day, and everyone clearly relished
the cod-Verdi and cod-Donizetti moments. There were a number of dramatic
accompanied recitative moments which were funny because they were done so
dead-pan; again the juxtaposition of the unlikely.

Soraya Mafi was a brilliant, feisty Mabel, combining pertness and winning
charm with a brightly accurate coloratura. The way she stepped out of the
chorus for her first entry was both visually and vocally dazzling, leading
into a lovely confident account of ‘Poor wandering one’ complete with
sparkling vocal decorations. David Webb brought out the right sense of
lyric charm and serious intent to the role of Frederick (the opera’s
subtitle ‘The Slave to Duty’ applied to Frederick). Perhaps his voice
lacked ideal ease at the very top, but he made a lovely pairing with Mafi,
a winning pair.

Andrew Shore is a consummate theatrical animal and his Major-General
Stanley was a superb creation, from the way he played ring-a-roses with his
daughters to the telling ‘asides’ to the audience. Even his crying was
funny. I am the very model of a modern Major General’ was perhaps a trifle
to steady in tempo, but again we have to consider the effect of the large
theatre, and overall Shore showed can also bring out the text in just the
right manner.

Lucy Schaufer demonstrated the sort of real contralto voice for which
Sullivan wrote the part of Ruth, using her lower register to devastating
effect. Yet Schaufer brought a poignant charm to Ruth as well, making her a
real person, bringing our sympathy and taking the sting out of Gilbert’s
fascinating with ‘elderly’ women (Ruth is 47!) in love. Sir John Tomlinson
brought his familiar combination of charm, character and devastating
clarity of diction to the Sergeant of Police, but this was a characterful
creation of a personality and certainly not a celebrity turn. Tomlinson
showed himself in fresh vocal form and brought great fun to the music. As I
have said, the smaller roles were all well taken combining character with
vocal enjoyment; Sullivan is careful to provide opportunities for his
smaller roles and all took them.

The chorus was similarly on great form, delivering vocal finesse, character
and words, whilst executing the busy choreographic staging. There were
moments when ensemble was not quite as sharp as it could have been and you
sensed that Gareth Jones, vocal ensemble, chorus and orchestra needed a
little more rehearsal to bed in properly but that will come in subsequent
performances.

Jones showed a deft hand with Sullivan’s music, keeping things moving
whilst ensuring there was a nice rhythmic bounce and a space for the
decorative moments in the vocal lines.

This seems to be one of those productions which is ripening as it is
revived, and the latest incarnation is providing some fine opportunities
for young artists. There is scope for a more pointed attitude to Gilbert
and Sullivan’s comic operas and I hope the ENO considers mounting a
production of another one. But this revival has the virtue of taking both
Gilbert and Sullivan seriously.

Gilbert and Sullivan: The Pirates of Penzance