Shakespeare created Falstaff to be an amusing companion to the young and somewhat frivolous Henry IV. Falstaff is gone when Henry becomes a serious ruler. Falstaff lives only for today and indulges in actions that members of the audience forego because they don’t want to deal with the consequences. San Diego Opera’s Falstaff, Roberto de Candia, sang with moderately sized burnished bronze tones. He gave a masterful interpretation of the lovable ‘drinking buddy’ who had no compunction about seducing married women. He even tried for two at once. Thus, the audience almost felt sorry for him but laughed vociferously when he had to hide in a laundry basket that ended up in the river. 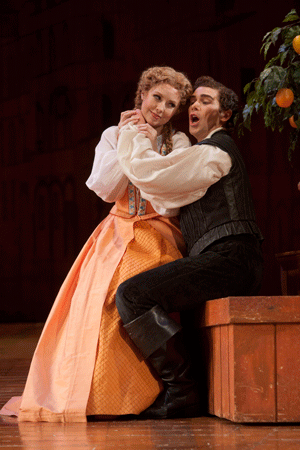 Maureen McKay (Nannetta) and Johnathan Johnson (Fenton)
Olivier Tambosi’s electric direction had Falstaff and his rollicking pals cavorting all over the wide Civic Theater stage even though designer Frank Philipp Schlˆssman placed the Garter Inn in a small area a few steps below stage level. The younger ladies were refined and demure, but Mistress Quickly was an earthy, Grandmotherly, arm twirling comic character.
San Diego Opera had built Schlˆssman’s three-sided, roofed wooden set for Chicago Lyric Opera, so it was a treat to have it back where it was born. It did a fine job of helping the voices resonate and throwing their sound out into the auditorium. Not only did the center section open up to form the Garter Inn, panels on the sides opened for various functions. 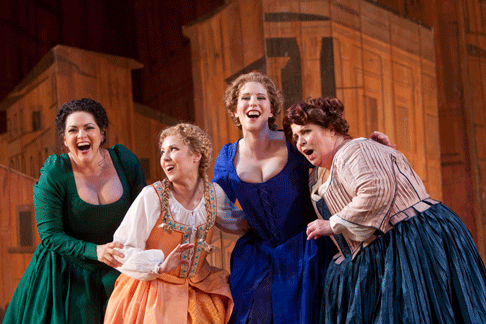 (L-R) Kirstin Chavez (Meg Page), Maureen McKay (Nannnetta), Ellie Dehn (Alice Ford), and Marianne Cornetti (Mistress Quickly)
Schlˆssman’s costumes included jewel-toned silks for the ladies and the upper class men. For much of the opera, Falstaff and his friend wore what looked like rag pickers’ left-overs, but Sir John wore a new neon red suit with a prominent cod piece for his assignation.
Falstaff’s devil-may-care friends, Bardolfo and Pistola, sung by Simeon Esper and Reinhard Hagen were impressive, both vocally and physically. Marianne Cornetti is a trumpet-voiced mezzo who has sung in the world’s most important opera houses. She is a formidable comedienne, and her performance was enchanting. Her low tones are smooth as chocolate cream , so her ‘reverenzas’ were a special treat. Ellie Dehn who had sung Mozart and Puccini with San Diego Opera, was a clear toned Alice Ford who sang with an opulent, voluminous sound. I would love to hear her sing one of the lighter Richard Strauss roles. 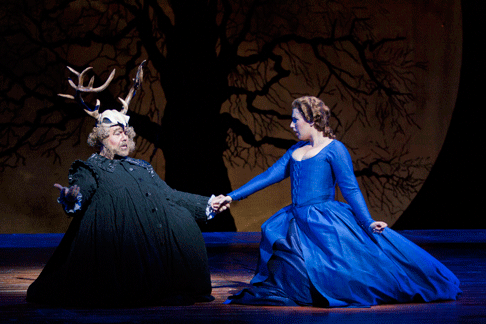 Roberto de Candia as Falstaff and Ellie Dehn as Alice Ford
As Nanetta, soprano Maureen McKay sang with crystalline tones. She and the Fenton, sweet-toned tenor Jonathan Johnson, were perfect young lovers with all the energy youth implies. Kirstin Chavez, who sang a sultry Carmen in Arizona, was a seductive Meg Page who sang with creamy tones. Joel Sorensen was a crafty Dr. Caius who sang his thankless role with character-driven tones. Conductor Daniele Callegari brought out many sonorities that are unique to late Verdi operas such as Don Carlo and Otello. His tempi always pressed forward and supported both the voices and the drama. Despite the presence of a large orchestra, he never covered any of the voices.
Maria Nockin