Several notable debuts contribute to the unqualified success of this production: Andrew Staples appears as Tamino in the initial part of the run, and Kathryn Lewek sings the Queen of the Night in all performances. Christiane Karg performs the role of Pamina and Adam Plachetka sings Papageno. The three ladies are Ann Toomey, Annie Rosen, and Lauren Decker; Sarastro is performed by Christof Fischesser. Mmes. Toomey and Decker and M. Fischesser also make their debuts at Lyric Opera in this production. Monostratos is sung by Rodell Rosel, and Diane Newman performs as Papagena. The set and costume designer is Dale Ferguson and lighting is by Damien Cooper. The Lyric Opera Orchestra is conducted by Rory Macdonald and the Lyric Opera Chorus is prepared by its Chorus Master Michael Black.

During the overture to the opera the premise of this ingenious production becomes apparent. When the curtain rises, a large, two-story house dominates the stage, whereas ample space is left for a performing area outside the dwelling. Some individual performers appear in the process of costuming, while the adults in 1960s dress are shown to their seats in several areas facing the house. Even at this moment at the beginning of the performance, one’s attention is variously lured to the performers, to those who are witness to the performance outside, and to those individuals inside the house rapt in their duties and visible through the windows of the large rotating structure. By the close of the overture the last person has been shown to a seat, those inside the house can watch from their unique vantage, and all attention is focused on the menacing chords accompanying Prince Tamino’s entrance – appreciated by both onstage audience and by us. In the role of Tamino Mr. Staples appears dressed as the Prince from Disney’s Sleeping Beauty, here fleeing a mock serpent manipulated from beneath by several of the children. As he cries for aid [“Zu Hilfe!”] with excellent German diction, Staples moves with nimble strides if only to fall into an exhausted faint. The three ladies, who vanquish the serpent and find Tamino, blend well sonically, while each retains her individual identity in the competition to remain standing guard over the “holder J¸ngling” [“handsome youth”]. The curiosity evoked by this scene is enhanced in Lyric Opera’s staging: Tamino’s encounters first with the dragon and then with the victorious ladies both take place near the house’s porch; a trio of neighborhood adolescents looks down on the second action from an upper story. Our attention is drawn to both groups on the stage until the ladies vanish, Tamino awakens, and the bird-catcher Papageno arrives. In this latter role Mr. Plachetka acts naturally, his movements showing consonance with Mozart’s musical gestures. In the signature aria, “Der Vogelf‰nger bin ich ja” [“I am the bird-catcher, that’s me”] Plachetka sings with a consistent legato, while he draws out phrases to give the effect of extending his net to encompass “alle M‰dchen” [“all the girls”] as well. Plachetka’s interaction with Tamino allows here sufficient opportunity for boasting until the three ladies return and remind him of his subordinate position. Once the three ladies silence Papageno, they declare their association with the Queen of the Night and reveal to Tamino the portrait of her daughter. In his reaction, “Dies Bildnis ist bezaubernd schˆn” [“This portrait is enchantingly beautiful”], Tamino is stricken immediately and concludes that his emotions must be a signal of love. When Staple asks if the “Feuer brennen” [“burning fire”] in his breast could be love, his voice rises magically on “die Liebe,” only to glide comfortably down on its repetition and realization that he must find the maiden. The same progression is exquisitely used by Staples in Tamino’s final lines with the repetition of “ewig w‰re sie dann mein” [“she would then be mine forever”].
Once the three ladies announce the arrival of the Queen of the Night, a primitively ominous waft of smoke is visible from the doors of the second-story porch. The portal opens to reveal the Queen dressed in a fashion similar to her ladies yet with a higher collar and characteristic touches reminiscent of dominant, negative personalities in animated films made popular through the Disney studio. As Ms. Lewek’s demeanor and command of the role demonstrate, she is ideally cast to portray this pivotal figure. Not only are the top pitches produced effortlessly and as a natural extension of her voice, but Lewek also creates an unforgettable portrayal through vocal color and interpretive effect. Aside from conjoining her introductory verses by means of a faultless legato, Lewek’s emphatic trills on “all mein Gl¸ck verloren” [“lost”] depict a pronounced lament of deprivation. When singing here to Tamino of her daughter, Lewek’s vocal decoration and heartfelt flourishes inserted into “so sei sie dann auf ewig dein” [“she shall be yours forever”] create a fresh approach to the Queen’s manipulative character. 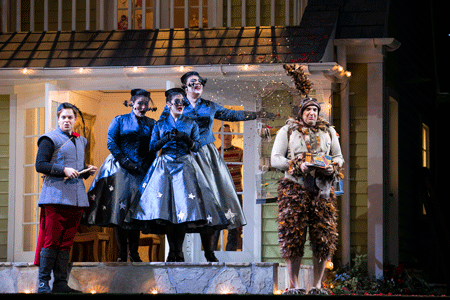 Andrew Staples, Ann Toomey, Annie Rosen, Lauren Decker, and Adam Plachetka
The exit of the Queen and subsequent reappearance of her ladies allows for several significant dramatic developments. As if part of a further adventure narrative, the ladies release Papageno from his enforced silence and present Tamino with the magic flute while delineating its special powers. In keeping with the spirit of this production, three of the neighborhood youths watching the action from an upper porch now function as the three “Kn‰bchen,” or genii, to guide Tamino and Papageno on their quest. In a scenic shift with a briskly delivered orchestral accompaniment Pamina, daughter of the Queen, attempts unsuccessfully to flee her guard Monostratos. At the entrance of Papageno, the captor flees while Pamina-costumed here to resemble Disney’s Snow White-discovers that this newcomer acts in the service of her mother. Once she recognizes his “gef¸hlvolles Herz” [“tender heart”], Pamina together with Papageno perform their sympathetic duet on the hope of forthcoming love. Ms. Karg’s bright, unforced voice glides through the arching melody of “Bei M‰nnern welche Liebe f¸hlen” [“Men who feel the call of love”]; at the same time, Plachetka’s role interweaves a sonorous accompanying line so that both parts merge and end on the optimistic note of humans attaining “Gottheit” [“divinity”].
The start of the Finale brings Tamino led by his genii into the vicinity of the temple, for which the suburban house now functions. When left alone Tamino declares that his goal is pure, to save Pamina. Here Staples embellishes “Pamina retten” with a repeated melisma in his affirmative statement. Voices from within the house/temple warn him away until the Sprecher [Speaker] steps out to comfort the youth. Mr. Govertsen’s dialogue with Temino, in which the noble goodness of Sarastro is clarified, shows a masterful command of German intonation and dignity of delivery. Once Tamino hears from the male chorus concealed inside the house that Pamina is alive, he plays his flute in joyous response. As if in answer to the call, the children of the neighborhood parade beneath makeshift representations of animals – this to the delight of the adult audience onstage and to those watching the Lyric production. The rapid succession of scenes brings Pamina and Papageno to the temple, as Karg reminds her decidedly timid companion with clear top notes that “die Wahrheit” [“truth”] must be their guide. Sarastro’s men – adult denizens of the neighborhood – emerge from the front door of the house sporting white and gold robes. As Sarastro, Mr. Fischesser’s demeanor is both fatherly and dignified, his vocal range ideally suited to the role and his projection of low bass notes especially clear. As soon as Fischesser directs with rising pitches “F¸hrt diese beiden Fremdlinge” [“Lead these two strangers”] into the house to further the instruction of Tamino and Papageno, Karg’s Pamina looks despondently at the front door as the act ends.
While the young characters are gradually tested and purified in the second act, sentiments are intensified and individual goals are ennobled or cast aside. At first, Sarastro’s men stand with horns in the second-story windows as he sings his appeal, “O Isis und Osiris,” asking for wisdom and strength to be granted by the gods to the two initiates. Once Tamino and Papageno receive instruction from Sarastro’s men, the house rotates to reveal Pamina asleep. At the arrival of her mother, an appeal for Tamino’s life is made, in reaction to which the Queen sings her second showpiece aria, “Der Hˆlle Rache kocht in meinem Herzen” [“The vengeance of Hell boils in my heart”]. Lewek’s security of pitch and well-chosen decoration are here intensified, just as her character’s fury and resolve have grown over time. The subsequent vocal response of Sarastro balances the Queen’s suggested violence. When he intercedes to protect Pamina from the advances of Monostratos, Sarastro banishes the assailant and sings “In diesen heil’gen Hallen” [“In these sacred halls”]. Fischesser’s performance of this aria is a seamless praise of humanity and forgiveness, his sonorous and varied pitches on “Freundes Hand” [“hand of a friend”] and “Mensch zu sein” [“to be a human being”] acting as conclusory watchwords for both the initiates and the audience(s).
While Tamino bravely and Papageno reluctantly follow the tenets of Sarastro’s teaching, Pamina’s despair gradually intensifies. At first Karg laments her perceived abandonment with aching languor in “Ach, ich f¸hl’s” [“Ah, I feel it”]. When in the Finale Pamina considers suicide, she is dissuaded by the magical, glittery intervention of the three genii who communicate the love of her prince as a reward for patient trust. This final transformation concludes with both characters wrapped in white robes leading a procession about the house. The ending is a celebration of the spirit of Mozart’s music and the ingenuity of this production which brings it to a renewed level of humanity.
Salvatore Calomino