Pairing Ligeti with Mahler may seem odd at first, but they both shared the suffering of great family losses. Mahler mourned the deaths of several of his children, while the Hungarian Jew lost more than twenty family members during the Holocaust,. Those trauma’s resonate within the sorrows and horrors of their creative output. Where Mahler’s grandiose symphonies portray humanity and nature through beauty, Ligeti’s microtonal excursions seem attempts at unravelling the quantum fabric of the universe, as well as reflecting the capacity of horror in human beings.
For those lured by Mahler’s Symphony No. 4 in G major and unfamiliar with Ligeti’s extremes, his Violin Concerto must have been a nerve wracking confrontation. Though not immediately easy on the ears, Ligeti’s strangeness grows on you. Even with its extra-terrestrial tones, which the musicians bring to life through wild techniques, this concerto never alienates likes some of Ligeti’s other works.
A late work, Ligeti’s concerto is laced with hints of unexpected optimism. Through unsettling vibrations and microtonal subtleties, Ligeti’s journey alternates from dense to nearly transparent textures, culminating in an otherworldly musical realm. In search of nostalgia, acerbic passages pop out throughout the unsettling current, perhaps Ligeti’s wicked humor in his music helped with his coping. Rattle sustained a grounded focus; I never felt lost in Ligeti’s extremes. 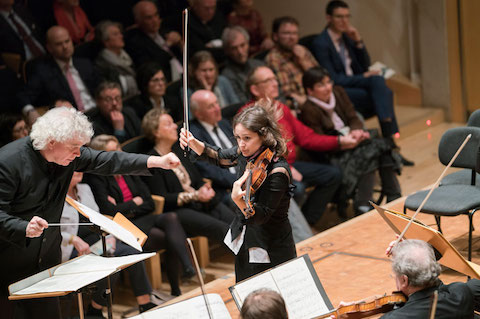 Patricia Kopatchinskaja in Ligeti’s wildly dramatic Violin Concerto
With the look of a poor fiddler, the French tomboy violinist performed barefooted in a shredded tuxedo that made her seem like a vagabond perhaps the most fitting for a Ligeti adventure. With dazzling virtuosity and a technical mastery, her raw theatricality played right into Mr. Rattle’s love for unconventional dramatic performances. The two had great chemistry. After she launched into the riveting cadenza, Sir Simon threw up his hands and left the stage, as if to say what do you still need me for? He returned later and conducted from the percussion section. Her Kurtag encore with the concertmaster was another delight.
In Mahler’s Fourth, Rattle’s supercharged intensity left me untouched till the final movement. He tackled it without score, and enforced Mahler’s frenzied tempos, while steadily slowing down in the quieter passages that often stirred in their romance. Skidding and slipping through the Viennese styles, Rattle’s fast-paced momentum reminded me of a highspeed merry-go round on the verge of spinning out of control. The complicated solo passages by the concertmaster were delivered with the illusion of perfect ease. Rattle fleshed out Mahler’s melodies with illuminating clarity.
Full of heart, Camilla Tilling sang “Das himmlische Leben” from Mahler’s Knaben Wunderhorn Songs. With resonance determined by a naive hope, she evoked the innocence Mahler intended. Towards the end her tone hinted at the threat of the end of childhood. She made a deep connection to the other musicians. In few instances, Mr Rattle’s volume drained out her voice.
After the adventurous thrills of Ligeti, Mahler’s Fourth felt more like an extravagant dessert than a main course. The symphonic ode to childhood innocence on the verge of being corrupted, had nothing on the horrors of Ligeti. The next day in Essen at Ligeti’s Le Grand Macabre, behind me two giddy ladies recounted their surprised joy of Ligeti: “Ah, aber das war sehr toll!”.
David Pinedo