Bohmler’s one-time teacher, Carlisle Floyd, was present at the Phoenix opening. At the pre-performance lecture, Bohmler recalled some advice that Floyd had once given him, “If an audience has a vocabulary of 200 words, give them those 200 words plus 200 they don’t know.” With this opera he gave the audience what they knew and a great deal more in beautiful, original music.

Conductor Joseph Mechavich brought out Bohmler’s suave melodies and the distinctive motives that will hopefully become more familiar when we get to hear this well constructed music drama a second time. I, for one, hope the chance to hear it again happens very soon. Riders is a fascinating work that deserves to be heard often.

Kohn based his libretto on the Zane Grey novel of the same name and there is conflict in every scene of this work. When a woman inherits important land with herds of cattle and a spring on it, leaders of her church want to control it and her. However, she will not marry the husband they have chosen for her and she refuses to let them control her or her property. This opera even contains a major aria about a man’s place in the American West and his perception of value of a gun. 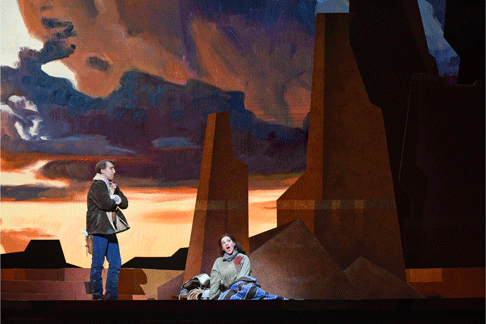 Amanda Opuszynski and Joshua Dennis as Bess and Bern Venters

One of the lines on the supertitle screen described the white-hot intensity of the characters, “Maybe we all got scraped raw by the world.” The opera’s opposing views are as old as the Bible and as new as the latest Facebook page. Bohmler told AZ Central.com, “I wouldn’t have adapted Riders if I didn’t think that it spoke directly to what is going on today—which is religious fundamentalism, women’s rights, guns, and society.”

Stage Director Fenlon Lamb told the story in a realistic manner and the gorgeous skies behind Ed Mell’s distinctive, stylized sets blazed with an intensity that matched the heat of the drama. Kathleen Trott’s plain, functional costumes set the action in rural Utah at the beginning of the twentieth century.

Bohmler’s expansive score and its detailed orchestration called for dramatic voices and Arizona Opera answered with finely skilled artists who probably should be better known than they are at the moment. As Jane Withersteen, Karin Wolverton’s opulent voice flowed into the hall with golden radiance and she never seemed to tire, even though she had very little time off stage.

As her helper, the gunslinger Lassiter, Morgan Smith gave us a stunning performance of a role in which the character’s personality gradually unfolds and grows in complexity. These two artists played off each other and made exquisite music together. The younger couple, Joshua Dennis as Bern Venters and Amanda Opuszynski as Bess, sang with lighter, more lyrical voices that floated seamlessly above the audience.

As “bad guys” Elder Tull and Bishop Dyer, bass-baritone Kritopher Irmiter and baritone Keith Phares provided more than enough dark tones and evil opposition to contrast with the love of both couples. Hugo Vera was a capable Judkins and Henri Venanzi’s choristers provided small groups of harmonic townspeople. At the end of the evening the sound of the applause and the cheers for this important new work was deafening and it lasted for several minutes.