The company makes a fair job of the task too. There is much to admire and
enjoy in this production, but ultimately an overly complicated design
scheme impedes rather than assists dramatic momentum. Moreover, at the E.M.
Forster at Tonbridge School the cast struggled both to create credible
characters and relationships, and to communicate the text with sufficiently
clarity.

To be fair, the singers may not be entirely to blame. Delius concentrates
on the opera’s central lovers – Sali and Vrenchen – and the other
characters are only lightly sketched. There is little to differentiate them
musically and, in any case, the characters’ vocal lines are shaped by
harmonic imperatives rather than given individual melodic identity.
Furthermore, the lovers themselves are more ‘emblems’ – of, paradoxically,
both childhood innocence and, in the opera’s final moments, consuming
passion – than ‘real’ figures. The composer seems to have been more
concerned with what might be termed the ‘emotional landscape’, as evoked by
the instrumental preludes that precede each of the six scenes.

Moreover, the E.M. Forster Theatre itself did not prove the most
sympathetic venue for opera. The auditorium is fairly small, and there is
no pit, which meant that the audience were seated very close to the
orchestra – the excellent 24-piece Kantanti Ensemble – which served to
distance the action. It did not help that conductor Lee Reynolds, who
displayed enormous sensitivity to Delius’s musical rhetoric and no small
skill in guiding and encouraging his instrumentalists, is himself rather
tall. It was hard to avoid the visual distraction in the centre of one’s
vision and focus on the stage action, particularly as the stage drapes at
the rear of the stage further hindered the projection of the vocal lines.

The playing of Kantanti Ensemble was one of the strengths of the
performance. Although Reynolds occasionally allowed his players a bit too
much free rein, it was a treat to hear the textural and melodic delicacies.
Tom Pollock’s horn playing was superb (he can be forgiven for tiring a
little towards the close), and he was matched by Sacha Rattle doubling on
clarinet and bass clarinet; the double basses’ tone was deliciously dark
and there was some explosive drama from timpanist Will Renwick. If the
sixteen string players inevitably could not generate a luxuriant stream of
sound, then the accuracy of their playing was impressive, and leader
Beatrice Philips offered sure, sweet-toned solos. 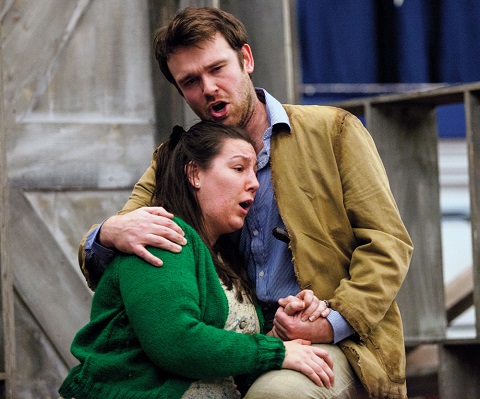 Director Susannah Waters and her design team told Delius’ tale clearly. The
composer’s libretto, drawn from a short story by Gottfried Keller, reprises
Shakespeare’s themes of family feuds and doomed love. Two farmers, Marti
and Manz, contest the narrow strip of wild land that separates their fields
and which is owned by the Dark Fiddler who, as an illegitimate son, cannot
inherit. Though prohibited by their fathers, during the bitter dispute that
bankrupts both farms, Sali and Vrenchen meet secretly. Friendship blossoms
into love, while their fathers surreptitiously encroach onto the fallow
land, inch by inch. The Dark Fiddler reappears and cautions that they
should beware the time when the land is no longer a haunt of birds and
animals, a warning which presages the tragedy that unfolds.

Anna Driftmier’s set is evocative. At the rear, distressed windmills flap
and whirl, beside denuded tree trunks; in this barren world, one can
imagine why the two farmers stake their claim for the wild pasture.
However, Driftmier’s design – while ingenious – is over-complicated: the
persistent choreographed re-arrangement of wooden planks and slats – they
form pathways, platforms and are assembled into raised frames to suggest
homes and bridges – must have caused the community chorus, effectively
reduced to stage-hands, no end of trouble in rehearsal. It’s just as well
that the chorus don’t have an awful lot of musical business but they sang
warmly and with confidence in the marriage scene, though the communal
festivities were a bit stiff. 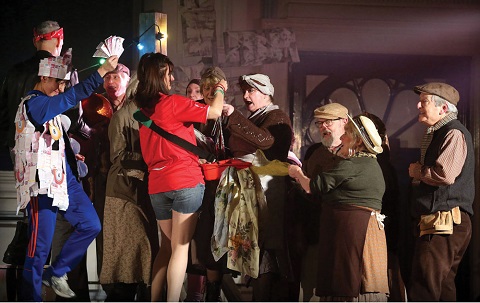 While the chorus effected the set transitions slickly, their complicated
reshuffles could not help but be a distraction during the instrumental
episodes. In the fairground setting of Scene 5 the necessary manoeuvring
undermined the tense jollity of the scene, though the garish costumes were
a welcome splash of colour emphasising the fickle unpredictability of this
uncanny world. Even the famous ‘Walk to Paradise Garden’ was not spared: we
witnessed a dumb show as Sali forged a stepping-stone conduit, stopping on
their arduous journey to remove one boot and bathe his foot in a stream.
And, in truth, despite the strong greens, purples, reds of Jai Morjaria’s
lighting design, which created an eerie otherness, the plywood boxes and
boards never looked like anything other than very real Ikea bookcases.

Tenor Luke Sinclair was buoyant and managed the high tessitura well,
conveying Sali’s irrepressible impetuousness, while Kirsty Taylor-Stokes’
richly coloured mezzo and full vibrato suggested the ardour blossoming in
the innocent Vrenchen’s heart, and captured her despair at the start of
Scene 4. Ian Beadle’s baritone needed more nuance and portentous resonance
to capture the Dark Fiddler’s enigmatic air; Beadle was all too amiable,
but his song in praise of the ‘Vagabond wind’ was appealingly sung. 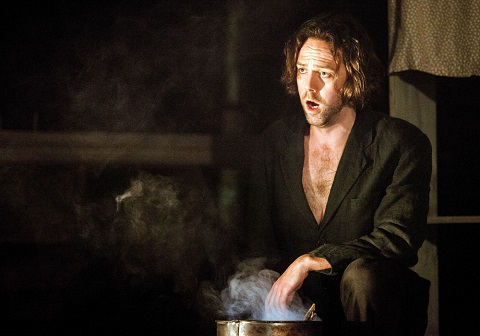 Geoffrey Moses (Marti) and Robert Gildon (Manz) established the context and
their characters deftly at the start, though Moses’ diction was weak at
times and I found Gildon’s bass a little tense and occasionally unfocused. As the Young Sali and Young Vrenchen, Alex Edwards and Nell Parry
were sadly over-powered (a case for a mic?); Edwards was almost inaudible,
while Parry had to strain to rise above the instrumental texture. 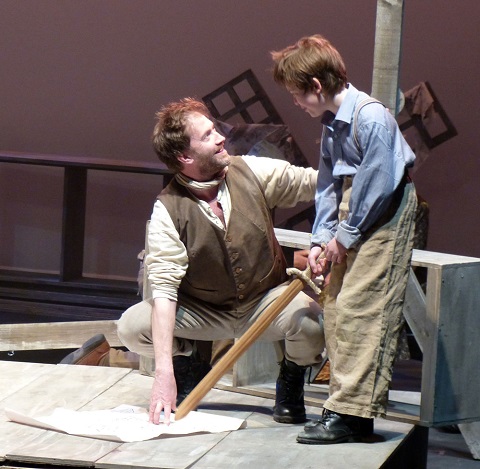 The final moments of the opera were absorbing and well-crafted. When the
lovers are recognised at the fair, Sali suggests that they should go to the
Paradise Garden where they find the Dark Fiddler and his entourage drinking
and carousing. Rather than submit to the temptations of his hedonistic
life, they choose to drift down river in a gradually submerging boat,
resigned to the Tristan-esque double suicide that must follow. I think that
the ‘wrist-slashing’ would have been best left to the imagination, but the
final tableau was artfully lit in a gleam of ultramarine, and superbly
paced by Reynolds.

This was an admirably ambitious production, but given the demands of
performing such a musically and dramatically challenging work in five
different venues one couldn’t help feel that a more minimalist staging
might have more effectively focused attention on the internal drama – the
power passions and dreams that are embodied in Delius’ score – which
develops in the village lovers’ hearts and minds.


There are three further performances: on Tuesday 28th March
at Cadogan Hall, London; and on Friday 31st March at the
Stag Theatre, Sevenoaks, and on Sunday 2nd April at the
Devonshire Park Theatre, Eastbourne.

Delius: A Village Romeo and Juliet